The platoon is growing.

Hello again and welcome to Inso's World on a lovely, foggy day.

This is currently the view from my window: 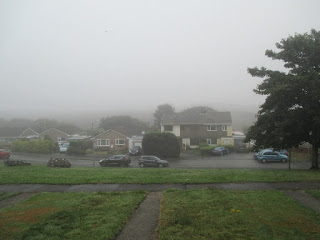 It's definitely different to last weekend... Hopefully, it will disappear and we'll get some sun again.

Back on track... this week has been one of travels and a bit of hobby so we'll start with travels.

My missus has had a bit of a holiday and we have been pottering around and doing everything she wanted to. We have been to the Cornish Seal Sanctuary, Pendennis Castle, Trebah Garden and have also traveled up to see my Step Mum in Seaton. While we were there we went for a lovely ride on the Seaton Tram system and had lunch on Colyton station. In lesser travels, we have also been to see Ant Man and the Wasp at the cinema. I was also (thankfully) left at home when my missus went to see the second Mama Mia film with my niece so that was a bullet dodged. We have also pottered about in town and spent some quality time together so this has been a good week.

On Monday, I had a bit of official duty to perform. I went over to Mullion in order to take part in a little photo opportunity for Marie Curie. There was a 'big cheque' handover that needed some yellow-shirts to be present and that went really well. I can't share the whole photo but here I am in all of my Marie Curie finery: 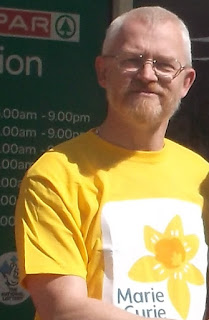 As you can tell from the sun in my eyes, Monday was a little less foggy than today!

That's enough life for today so let's talk hobby now. Last week, I showed off two finished elements of the first infantry platoon for my Squat army. This week, I get to show the first complete, Squat elements. This is the Platoon Command Squad for the First Infantry Platoon (complete with Primaris Psyker, as shown off last week): 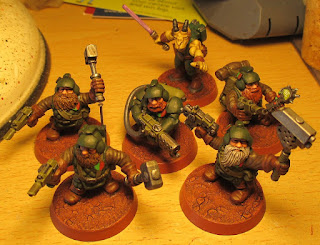 As you can see... there are ACTUAL Squats painted! Okay, it isn't the best pic but when the platoon is all finished, it will get a decent photo-shoot.

Now that the troop units are well under way, here's a WIP of the First Infantry Squad:

The image shows the first, basic, base-coat, ready for tidying up prior to a wash. The gun-tractor has been progressed since the picture and is already washed, ready for highlights... mostly because it has to be painted in a different way to the troops due to the need for it to be separate from its base. It's also nice to have a 'little project' when painting blocks of troops, just to take the edge off a bit.

In other hobby news, Warlord game have had a summer sale and the prices were so ridiculous, I felt obliged to spend some money with them. As a result, I have ordered twelve Ghar Battle-suits and ten sprues of Concord troops/drones. The reason for this was that the sprues were reduced from £10.00, £8.00 and £12.00 to £1.00 each! Instead of having to spend £20.00 on three battle-suits, I got twelve for £12.00! It would have cost me £120.00 to get ten of the Concord sprues... instead it cost £10.00! It would have been insane NOT to buy any... especially seeing as they will all be added to my Demiurg army and were already earmarked as future purchases. 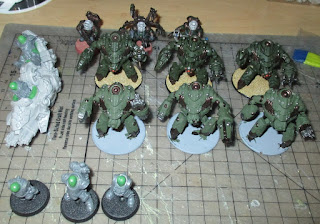 ... Speaking of which, when all the sprues turn up, I will have the following:
I will also have fifty Concord troops to add to the bits box and this may be an opportunity for a little conversion for something else that has been rattling around in my head lately... Kill Team.

See you from the abandoned city!
Posted by Inso at 12:09