This week has been fairly good... I have managed to get quite a lot of sculpting in and have finished Sgt Harker: 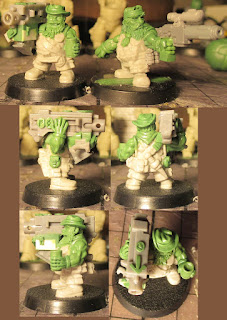 The next one up will be Dutch; the platoon commander for the little Vanguard detachment. He will be based on Arnie in Predator and will have a bolter, power sword and big cigar. He will be at rest, smoking the cigar, with his bolter in a relaxed position and his power sword sheathed.

In other news, the fourth of the half-tracks turned up and is now at the same stage as the other three (all shown here with an earlier WIP of Sgt Harker): 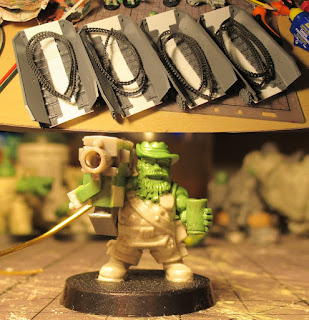 I now have to decide on the next step but am having to think about it a lot because of the shapes and the fact that I need to make it a design I can reproduce easily. It is far from shelved, I just need to get the sequence right so that I don't end up wasting lots of plastic.

With sculpting in mind, I have an existing commission that I have started and have also picked up a further commission to keep me busy. Both are in the USA and both are interesting things to sculpt so it is a good example of how international trade agreements can be reached if both parties are open and friendly.

So... the weather has been rubbish this week but I managed to get out and about on my bike once. When I got back, I gave it a once over, lubricated the chain and managed to push it off its side stand in the process. Luckily, I managed to prevent it falling over completely but, in the process, I have damaged my back and further aggravated my shoulder so I am a bit like a hunched old crone at the moment. I can't drive, ride the bike or lift heavy things. Obviously, it was worth it to stop my bike getting damaged but I am paying for it now!

My 'dry January' is going well. I have so far saved £70.70 for the charity pot and will get close to £100.00 by the end of the month so it is looking good. If you want to help with fund raising, here is the link to the story and how you can donate:

My son is also dry for January and knows the family involved so it has a personal link to us.

This coming week, I was supposed to be going to a friend's leaving do but I am unfit to travel so I am gutted. It would have meant a ten hour drive and I am not safe to do it. I will have to wait until I am fitter to go and visit but it is a real shame I can't make his do... We joined the RAF together in 1988 and he has decided, like I did a year ago, that he would leave to pursue other avenues, after a 29 year service. I will certainly be thinking of him on the day.

See you from the hobby-horse!

This week has been dull, overcast, windy and very wet indeed... so I've stayed in and just kept up with the chores. I'd like to say that I have been warm and comfortable but the combi-boiler has decided not to work (Repair/service will be on Tuesday) and I have had a rather painful shoulder this week... and I have tried to steer clear of pain-killers for fear of addiction (Codeine is the only thing that touches the pain and it isn't to be taken lightly).

Monday was my birthday. It was very quiet and unremarkable. Any gifts I got, were money destined for Shelterbox (the disaster relief charity that I support) so I didn't get a 'haul' or anything like that... I prefer a 'gift of giving' present for my birthday; it gives a birthday more substance.

Friday was a pub night and the band was very good but with my 'dry January' thing going on at the moment, I was limited to lime squash for the evening... but raised a further £15 in the process so it was a good evening in the main.

Hobby wise, this week has been rather productive. I have been ticking along with the second member of the 'Predator' team (Sgt Harker) but haven't really got far enough to show anything. Most of the work has been on his free arm and getting his heavy bolter looking functional. Hopefully, I'll get further with him during the coming week. i would probably have got further with him if my Corvus Blackstar hadn't turned up. Once the kit arrived, I couldn't help turning it into a Valkyrie so after removing all the inquisitor symbols and assembling it, it now looks like this: 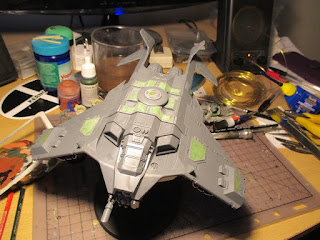 There wasn't too much extra work and in another post, I will post some better pix with an explanation of what I did. Once the Valkyrie had been finished, I had my kit building head on so I unearthed my half-track kits and set to converting them. I have three of the kits and have ordered a fourth so I can get a platoon'e worth of kits converted together. I have been working on three of them and have got this far: 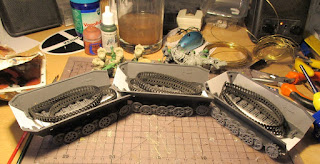 I have paused for a while until the fourth kit arrives so that I can get them all to the same standard before moving forward. Hopefully, it will be here tomorrow or Tuesday. My aim is to build four amphibious assault vehicles that can be proxies for Chimeras... but they won't look like Chimeras at all.

There are other hobby things going on at the moment but I'll share them at a later date... needless to say, some is pretty average stuff and other bit are a little bit different.

A stirring in the warp...

It's been another week of things going on and passing by.

I managed to get a few miles in on my motor bike and popped over to Marazion for a spin: 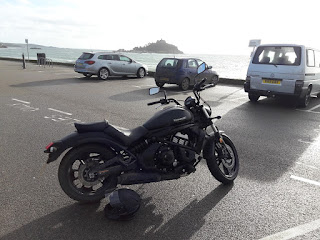 Only another 480 miles before it gets its first service and the little fairing fitted above the clocks. Hopefully, I'll get a chance to potter out again this week.

Yesterday was spent driving to Aylesbury for a family visit... followed by a drive back and today has been mostly spent in the pub. I haven't had a drink because I am going dry for January and am donating my pint-money to Enzo... read about it/donate here:

My son is also doing the same thing so hopefully, the money will flow in.

From a hobby perspective, I have finished sculpting my Squat version of Sly Marbo: 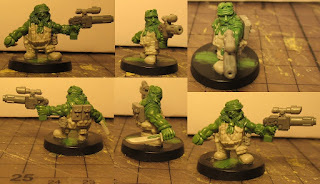 I have also been drawn into an idea that I heard on a forum I visit, that involves a specialist air support unit... so I have ordered one of THESE to convert into a Valkyrie. I have also started to convert a Sgt Harker to join Marbo in my Catachan force. Sgt Harker is getting a shoulder carried heavy-bolter and... a teacup...

In amongst that, I have also been sculpting a Frogulon... who will get a decent pic once he is finished. He's getting there so it won't be too long.

This coming week, I expect things to tick along... but it'll be a bit different because it's my birthday tomorrow so I also expect stuff to go on.

See you from the gate!

The dust has settled.

Hello and welcome to a normal Sunday at Inso's World.

It has been a quiet week again but I have needed it in order to land after a rather boozy Christmas and new year. Luckily, I have made a pact with my son to go dry for January and put what I would have spent, into a charity pot for one of his friends. My pub landlord is very graciously buying my soft drinks for me so that helps as well. The bonus is that I don't drink for a month and a charity gets some pennies... Winner!

To be very frank, the weather has been RANK this week. Storms, heavy rain, bitter cold, very strong winds... we've had it all (not snow, thankfully). Luckily, I managed to get one day where I felt it was OK to go for a ride on my new motorcycle and I thoroughly enjoyed it. I even saw a glimpse of sunshine while I was out! I am hoping that things cheer up a bit more so that I can get out and about a bit more because I need to get 600 miles on the clock before my first service and my little windscreen fitted. That said... there is always a little bit of light to be found in any circumstance... 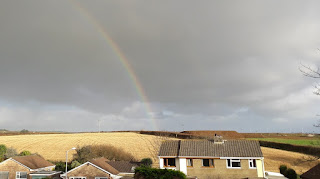 At the end of the month, I have a 'top table' to go to. Basically, it's a formal dining event to mark a special occasion. This one is to join a friend of mine at his leaving do... 29 years RAF service. I joined up with him and we were on the same three-year apprenticeship together. I am expecting it to be a great evening.

From a hobby perspective, I have been all over the place. A lack of sleep has fired up my imagination and that is both a good and bad thing. The good thing is that I get lots and lots of new ideas... the bad thing is that I don't really have the motivation or focus to realise the ideas into physical objects. That basically means that I have half drawn pictures and bits of glued together things that will sit and fester until I get the motivation to work on them. However, it doesn't mean that I haven't done anything. I currently have a 'Frogulon' as a WIP and a Squat version of Sly Marbo. Unfortunately, they aren't at a point where I want to show them off yet so maybe that will happen next week... who knows?

That's about it for now. As is usually the case (recently), I hope to have something interesting for next week.