This week has been another slow plod but I have managed to slap some paint on things so here's a few pictures. 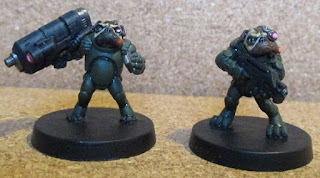 The bases will all be finished together so that they match the scenic base.

Next we have a WIP Big Robot: 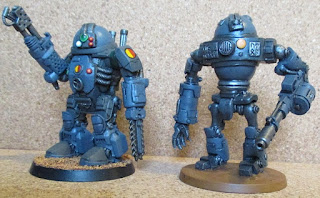 He's the one on the right... The one on the left is another robot conversion. Obviously, I still have a way to go but it is getting there. These two have also caused me to think about putting together a small band of warrior robots... a bit like the ABC Warriors... but I have only got as far as these two and possibly the embryo of a larger one that I have had on my mind for a very long time... but only time will tell what happens there.

The hobby. It is just two words. It means different things to so many people but to me it is a habit that I have built up over the last thirty years or so. What does it actually mean to me? It is a way to pass the time... but it is also a massive time-soak that I could be using for other things. I often look at my hobby stuff and despair... this is my living room (I am not even going to mention the state of the loft): 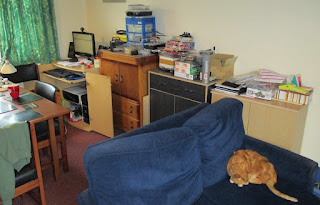 The three cupboards are completely full so I have no space to tidy away all the mess on top of them... and this is my dinner table:

If we have friends around for a meal, that stuff gets plonked on the computer table. My life is dictated to by the amount of hobby stuff that I have... it stares at me everyday and there is no escape from it. Last week I was talking to a workmate about it (he's not in the hobby) and I referred to it as an anvil around my neck that I had no emotional attachment to. I simply continue to do the hobby because I have got into the habit and it has cost so much that I feel obliged to keep going with it. I then said that if someone turned up and offered me a fair price for the lot of it, they could take it all away and I wouldn't miss it... it would probably be a great weight lifted from my shoulders.

I think there are many such things in life that you allow to take control of you and it is only when you start tripping over things and are forced to confront them that you realise just how unimportant they are.

To put it into perspective, lets's take a box of plastic space marines (ten tactical marines):
Before you know it, you have to think about all of the things above and until everything is finished and stored properly, there is stuff to get involved with. That doesn't take into account having to transport everything (something that happens quite regularly in the military).

All that, just to have ten plastic marines to game with. It makes you think.

I look at my collection and I despair because a lot of it doesn't have transportation storage... so I have to sort it out this year OR sell the stuff.

It's all on a knife-edge at the moment.

So much to think about.

If you are interested in buying some of my stuff... here's my Ebay link:

Things are going slow so you may get a bargain if you are quick!

Well, it's another Sunday where I was debating whether or not to update the Blog but then I thought... what the heck... so here I am.

This week has been very quiet on the hobby front with no painting being done on the pugs but a little bit of painting has been done on Big Robot... you remember Big Robot?: 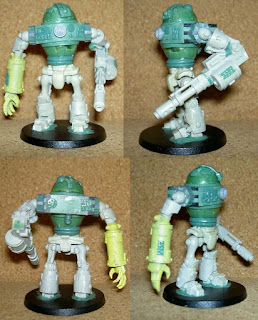 He'll be painted similar to this one (on the right):

I have no idea why I decided to paint him but I am sort of 'clutching at straws' with the hobby at the moment. I guess the long run of sculpting Squats has sapped my hobby mojo and I need to recharge.

In other news, I finally got to watch a film that I have wanted to see for ages: Kingsmen. Well I thoroughly enjoyed the mix of stylised violence with a lot of classic 'James Bond' nonsense. It was definitely worth the wait; even if at times it was totally predictable.

I also found a copy of one of my all time favourite films; Brazil (by Terry Gillingham) so I will be able to watch that again soon.

In other news, the ginger cat has been poorly... and expensive this week so we've spent a bit of time at the vets trying to get things sorted out. Fortunately, things seem to be on the mend so hopefully (touch wood) she should return to normality very soon. She's 17 and a half years old, senile but seems to be as fit as a fiddle.

I'm sure you remember me mentioning that my son was away on basic training for the Royal Air Force... well, he has finished all the hard work and is now preparing for his pass-out parade in a week or so. The boy done good!

Finally, I have a few items for sale on EBay again (starting at 16:30 GMT today):

See you from the top of the ladder!
Posted by Inso at 14:48 No comments:

No... Pugs in powered armour!

This week I have been working on a couple of miniatures that have been sat for a long time gathering dust. They are from Hasslefree Miniatures and are a pair of pugs wearing powered armour: 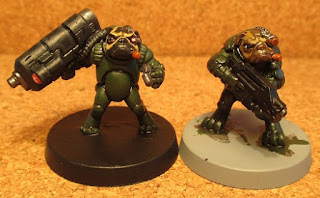 I apologise for the poor picture quality but the light in the house is terrible today and outside is just as bad.

It's just a short post today so I'll be off now.

It has been a very quiet week where I have not really managed to achieve very much of anything, especially from a hobby perspective.

I have really come to a grinding halt with the hobby and was toying with the idea of not posting today's update... but here it is anyway.

The Sharclons are in a box with their part painted shuttle and my muse has also been suitably packed away. That said, I have found something in my cupboard that I am working on but I can't show it off because it will be a surprise for someone... when I finish it (once I have finished it and it has been sent off/received, I will post pictures and links).

In other news, I received a nice little parcel through the post this week: 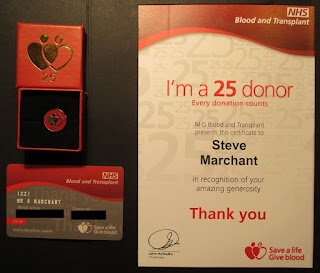 I am really pleased with it for two reasons... first, it is a lovely little prize that I wasn't expecting to be so nice and secondly, it means that I have reached the 25 donation milestone; which I am quite proud of.

So... today another milestone happened. Me and my wife went to the gym together. We weren't there for very long but we got some exercise in. The milestone is that this is the first time my wife has joined me in the gym EVER (we've been married for nearly 25 years). As a result, we took things VERY steady... but it is a start and I hope that we can make a regular thing of it.

I'm sorry there isn't much to show off this time around but who knows? Next time there may be something a bit more interesting.

Happy New Year and welcome to Inso's world for the first post of the year.

This is the last full year I have in the military and come January next year, I will be a civilian. It is a big change but I am looking forward to it... 28 years is a long time.

In addition to the stuff I HAVE to do, here's what I would like to do:
So... there you have it. No resolutions, just things I have to do and a few things I'd like to... but if I don't get everything done... that's life.

Now the boring stuff is out of the way, I thought I'd chare a couple of images of the Sharclon transport. Here's a 'before primer' pic: 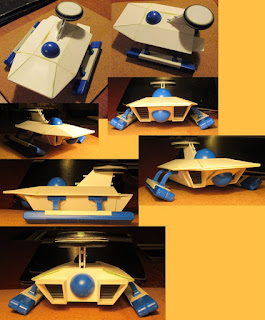 ... and here's one after a unifying coat of primer has been added: 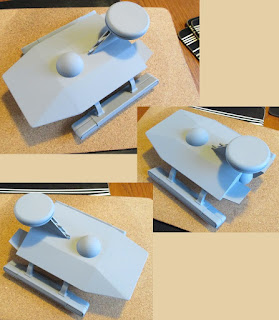 I have started painting the transport but am not very far along yet. It is going to be gun-metal with glowy bits. I am also thinking of using Tau decals on it... but that may change.

That's it for now. I hope you have all had a great Christmas and wish you well for all of 2016.

See you from the branches of the singing, ringing, tree!