It has been another slow week (where hobby is concerned), with a small amount of sculpting on some commissions being the only sculpting. I didn't even get any sculpting done on the Squat Eversor Assassin that I have started.

Instead, I have been enjoying having a kitten... who is growing very quickly and finding his feet in the family. Here he is with a feather:

He is so full of 'kitten wiggles' that he has been distracting me from my hobby... but I can also blame the humid weather as well. In fact, the weather has been so sweaty that I have dug out my paints and started a bit more work on Death: 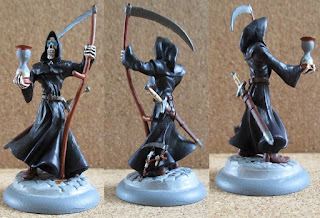 Still a long way to go... but it is progress. You may notice the big slope on the base. Well, I noticed that he had a massive lean so I had to add a slope to the base in order to level him up again. You can't really see it but there is a bit of purple on the robes that will be getting highlights and washes in order to tone it down. As I said, still a long way to go.

House buying is progressing nicely. It is just a case of waiting for the process to continue and paying bills when they arrive. We also get the odd little mission to carry out (verifying documents etc.) so we are kept busy too. Still... all progress is good progress.

See you from the countryside!
Posted by Inso at 12:47 3 comments:

This week has been another week of house related fun... solicitors, mortgages and all sorts of other things so I would have loved to have had my mind taken off things by my hobby but unfortunately, the weather has been too hot and humid for sculpting so I have had to settle for one very small sculpting session to finish off this little sculpt: 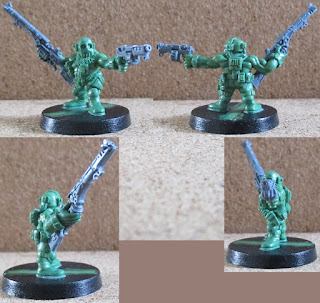 As you can probably work out, he is a 'counts-as' Vindicare Assassin. I think he has turned out OK but there are a few things that could have been better (the arms are a little long, for starters). However, to carry out 'repairs' would mean a lot of rework so I will turn a blind eye to it and move onto the next one... an Eversor Assassin (but not as you would expect).

So the heat this week has meant that my hands have been constantly moist which has made working with putty practically impossible... so I needed something to take my mind off things and what better thing to do that than...

Yep, I now have a kitty all of my own and he is called Sam. We collected him on Monday and he has had a check-up, his first set of jabs, worming and flea treatment and he has settled in nicely. The other two cats are getting used to him but they all still need to find their places yet so that will be ongoing. The good thing is that this is my kitten, not the families, so he will be getting trained up to be able to do a few tricks... sitting for treats (our other cats already do that) and possibly some fetching. He is full of character and has a wonderful nature (a mix of cuddly and killer... which is spot on).

And that, as they say, is that. I am back to work next week so I will have to shave my beard off today... 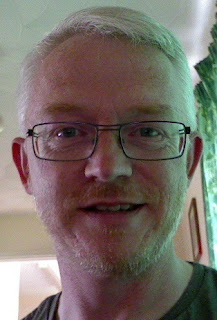 ... and I'll have to get back on the treadmill.

See you from the top of the hill!
Posted by Inso at 11:03 No comments:

Time for a break.

I can safely say that this week has been quite amazing and tiring in equal measure... and also no hobby stuff at all has been completed, started or even thought about (well... maybe thought about... but not worked on).

Last Sunday, I went to the F1 Grand Prix with my wife and then on Monday, I drove to Cornwall for a week of looking at houses.

We had a number of viewings booked but, in the end, we cancelled a couple because we had seen the one we wanted and put an offer in... which was accepted. We are just waiting for everything to sort itself out now before we start thinking about removals etc.

Things moved extremely quickly and, as you can imagine, my hobby was the furthest thing from my mind while all this was going on.

Now that I am back at home, I am absolutely shattered (two 6 hour drives, not sleeping very well and more than a little 'testing the local ales'...) so probably won't be getting much hobby stuff done for a day or so.

The big thing is that my hobby spending will cease from this point for the forseeable future (apart from Green Stuff). I have a massive amount of stuff to be getting on with and we need all of the money we can lump together for preparing the new house. Luckily, with a bit of Green Stuff, I can pretty much make what I like so it shouldn't impact things too much.

I have this coming week off work so expect an update in the week.

EDIT: I guess I could post a better WIP of my little surprise project: 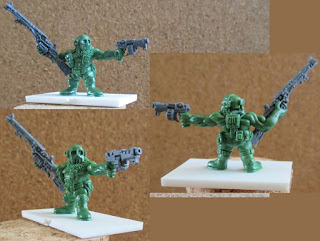 It should be fairly clear what he is now...

It has been a very nice week of things... including a lovely works BBQ at the boss's house and a very cool trip.

So today the blog update is late because I have not long returned from taking my lovely wife to see the British F1 Grand Prix at Silverstone.

The day started at 03:15 with an alarm that was far too early but enabled us to travel in relative quiet and arrive at the circuit just in time to see the gates open. We saw three races (GP3, GP2 and Porsche cup) before the main event and even though there were some very heavy rain showers (we were well protected due to our polythene ponchos) I still managed to get sunburn.

The main race was great... made even better because Lewis Hamilton won. I took a load of pics and a couple of videos but I am really tired so I have only uploaded a couple... however, I have a short video:

The reason we went was because my wife is an obsessive F1 fan and is a mad fan of Lewis Hamilton. This is the first time she has ever been to an F1 race and she absolutely loved the whole day... especially because Lewis won... which was brilliant.

In other news, I have got a little further with my commission sculpt and also my mysterious sculpt...

He's certainly getting there...

See you from my bed!

Hello again and welcome to Inso's World after what has been a very slow week.

Since the first five of the Veteran Tyranid Hunters were posted, I have not really been in the mood for much hobby time... especially seeing as I had the Summer Ball to go to on Friday.

Obviously, the Summer Ball is an annual event where our mess holds an all night ball with music, live bands, dancing, great food, a free bar, dodgems, fairground rides... the list goes on... So Friday night was very much a case of partying the night away with my wife and friends, having 'survivors' breakfast at aroung 03:30hrs and then taking the winding path home. Saturday was a very leisurely affair and today hasn't been much better but every once in a while, it does you good to chill out and be a slob.

So... what hobby stuff have I been up to?

Well... I have bulked out the replacement commission sculpt and I have been working on the remaining five bodies for the Veteran Tyranid Hunters. They are all at the same stage now... ready for the faces to be sculpted and the helmets to be cleaned up before the arms and packs are glued on:

In other news... I have had another distraction. A distraction so cunning that you could pin a tail on it and call it a fox. A third detachment for my army! Yes a third detachment. A detachment that will only involve four models. It certainly isn't a big detachment... but it is a very hard hitting one... so be sure to watch out for it in future posts.

I know... it's another very short post this week but I am hopeful that I will have some great stuff for the next post... which won't be on Sunday because... I'm off to the Silverstone F1 Grand Prix with my 'completely obsessed with F1' wife... so that will be fun.

Then of course... there is Cornwall, house hunting, mortgage seeking and cider drinking...

The wheels of life are certainly turning!