Hello and welcome from Inso's World where, apart from a little extra not going out, things are pretty much the same as they usually are.

A lot of people are using their enforced home-time as an opportunity to get extra hobby stuff done but I appear to be ticking along, just doing the usual amount. I am a bit lucky because I am a key worker so I get to escape a bit more often and go to work (Dementia care doesn't stop, just because a nasty old virus turns up) and this is helping me keep rational about the whole thing. I also have the added bonus of more company because my wife is at home due to her playschool closing... so I am not left in my own company for too long... which would be a bad thing.

So... life is not overly different. I guess that's one good thing about being a geek/nerd... not being the most sociable of people. I stay in a lot and hobby anyway so it's my time to shine, as they say.

Speaking about hobby stuff... what the hell am I doing!?

To start with, I had a little rest after the Kickstarter and didn't do very much. Then I received a bunch of resin that I was able to paint up so I did just that. These are the first miniatures that will be joining my grand new army: 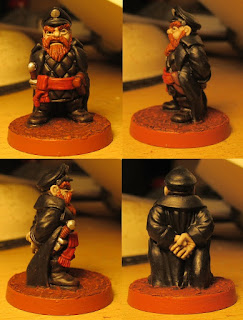 Blue Platoon will eventually be the command platoon. The pictured miniatures are a Commissar, Sgt and four lasgunners. I went for a blue/grey beret because of my links to the RAF; which I thought was a nice tie-in.

At the moment, I am working towards building a (command) platoon of miniatures. That means that I need to have the following:

As you will notice, I haven't mentioned heavy weapons. That is because I will be using heavy weapons in a support platoon so that will come later (and also... I've already sculpted a HW trooper so I don't need to worry about that too much). I also haven't mentioned the Command Squad contents because I haven't decided on them yet... and Lasgunners can fill in for now.

Currently, I am sculpting two Special Weapon Troopers and another Lasgunner. The Special Weapon Troopers will be similar to the heavies by having separate weapons that can be attached as you choose. The sculpts have been started and are at the stage where the quilted armour is going on. I won't post WIP shots because... I don't want to!

Once those three are finished, I plan on sculpting a couple of different Comms Troopers, another two Sgts, a couple of officers and more lasgunners. That will fill out all of the spots on the standard infantry side of things. If I can remain motivated, I'll then sculpt a medic and standard bearer.

Hopefully, everything will eventually be available to purchase form Macrocosm Miniatures, when everything is back to normal in the world... and also when I have finished the sculpts and Chris has sorted out casting them... so everyone should be able to build a GRAND army of their own.

In other news... my Motorcycle is as clean as it can be and is not allowed out... which is probably the only thing that I am annoyed about during the lockdown... but I am heeding the advice:

Stay inside... save lives.

Hopefully, that's what all of you are doing, if you are in a country that is telling you to.

Stay safe and look after each other. Community will also save lives in this time of fear and speculation.

See you from the watchtower!