Another guide. This time, how to convert a classic, plastic, Imperial Guardsman into a Space Dwarf.


Imperial Guard to Squat Guide.
To view the images at their proper size, right click the image and view in a new tab. 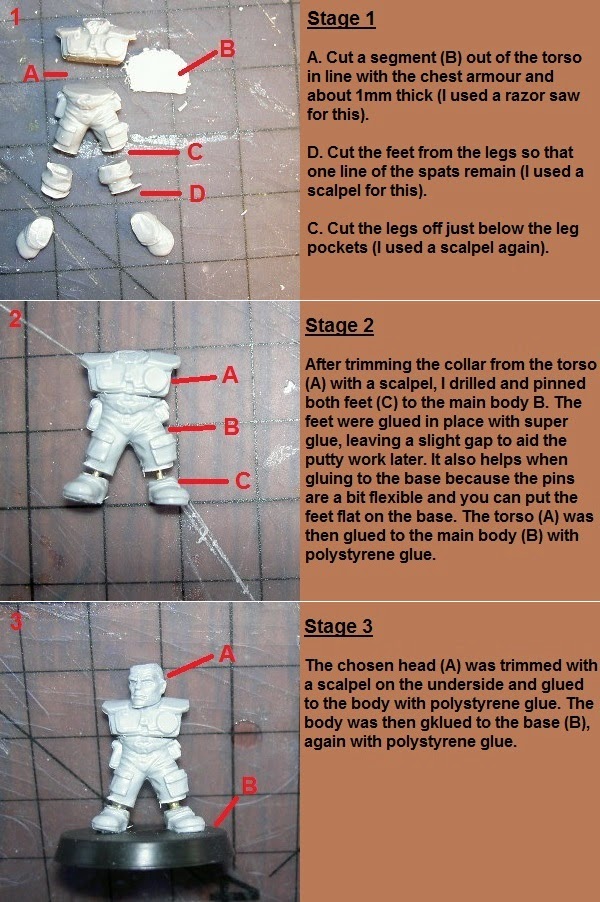 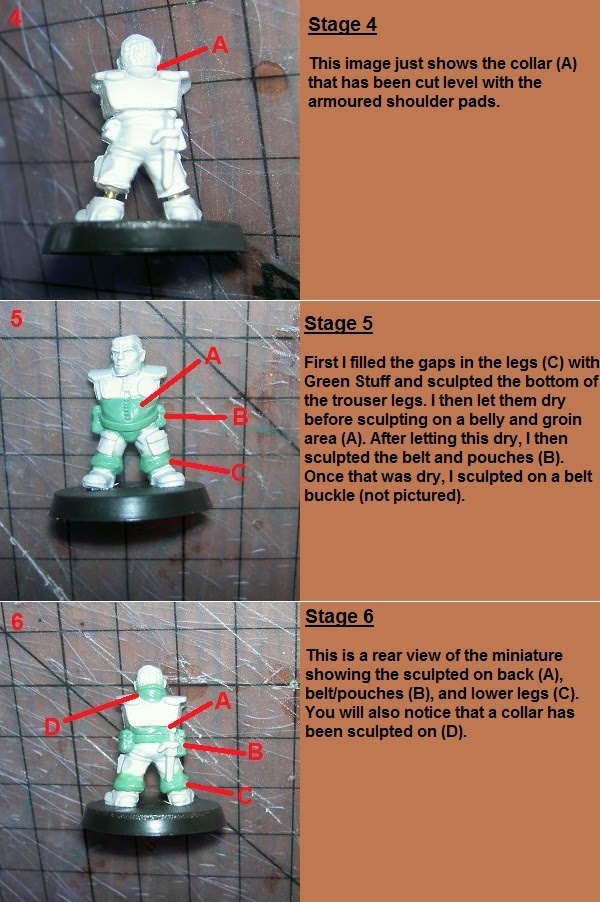 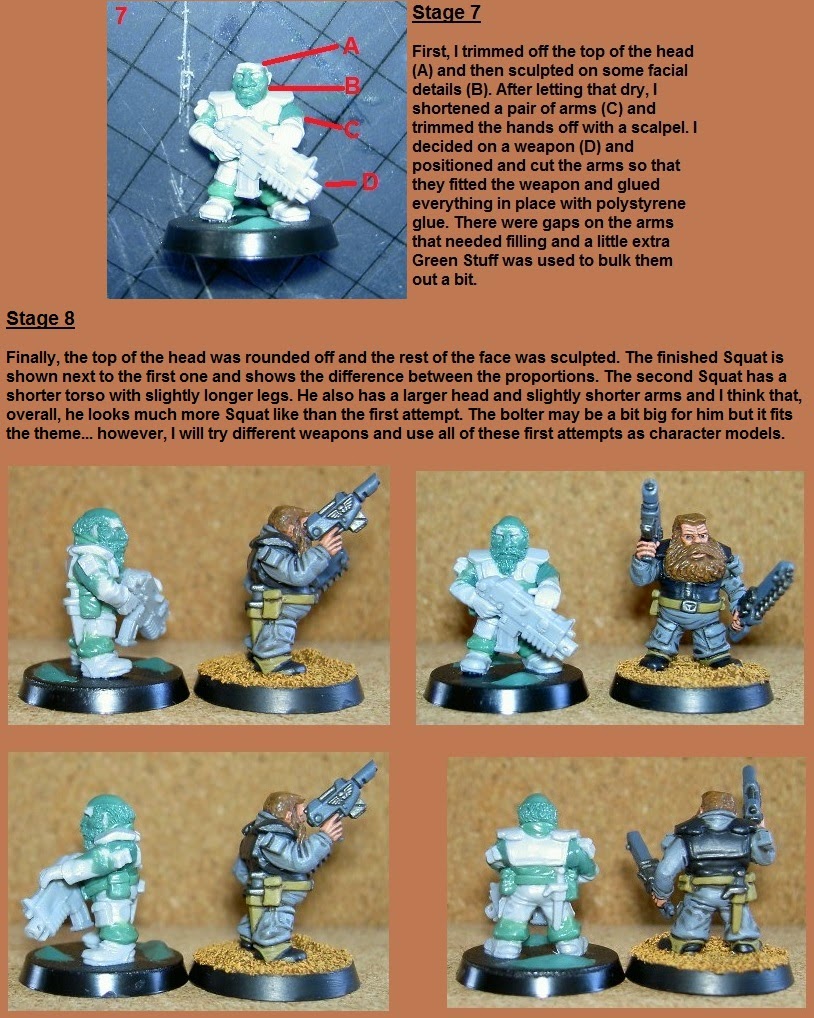 I hope you can make use of the guide and if you do, please feel free to post pix of your efforts and share this page with other who you think may appreciate it.

There are occasions where people ask after certain 'How To' guides that I have put together. Well, I have just converted this one into pictures so here is the first one:


Mini Marines
To view the images at their proper size, right click on each image and view in a new tab. 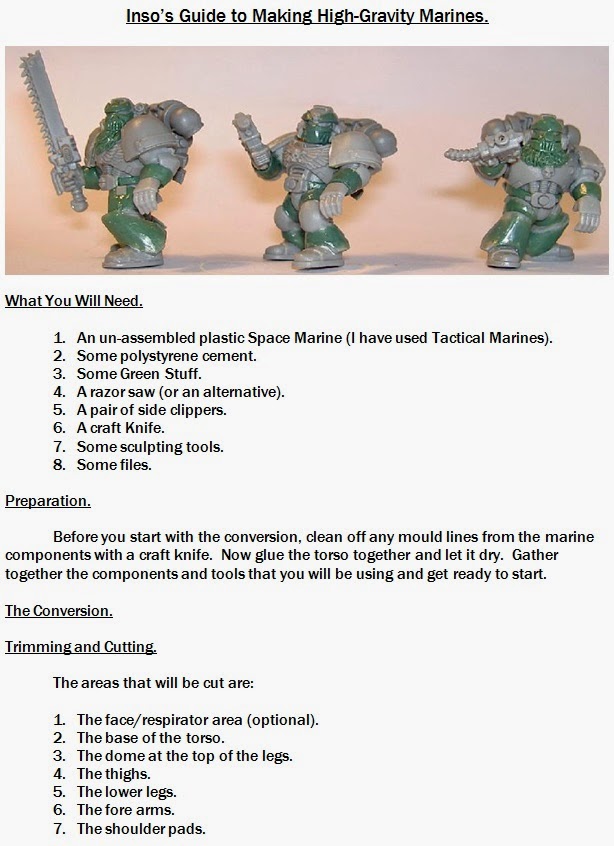 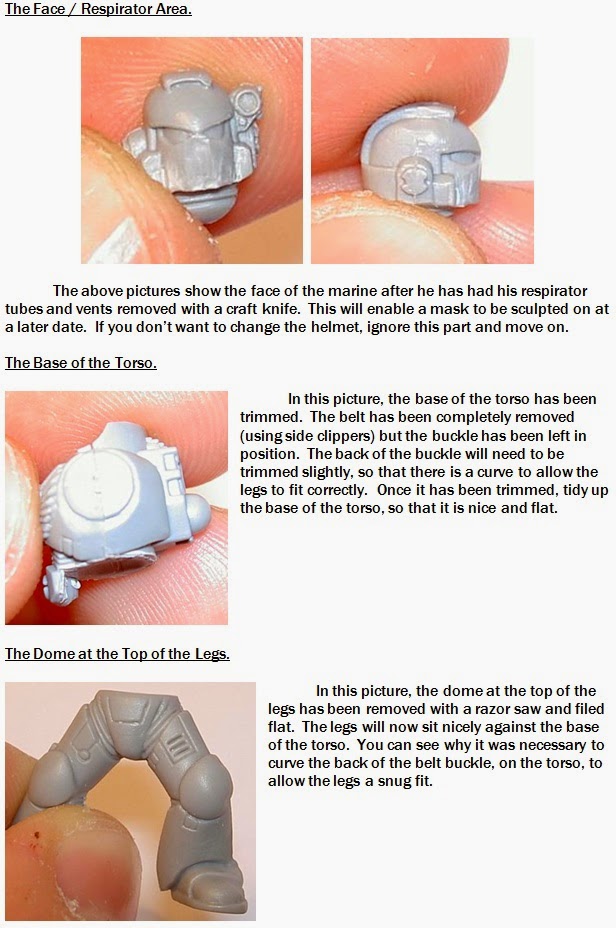 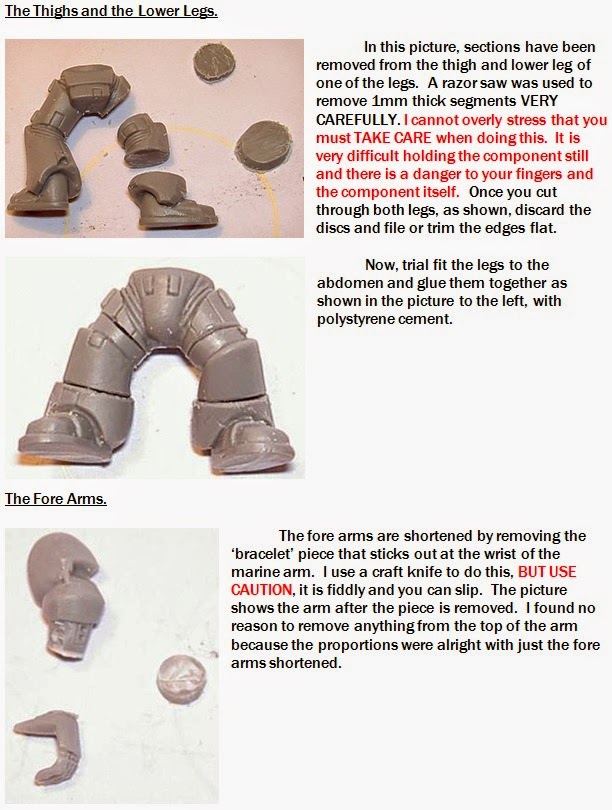 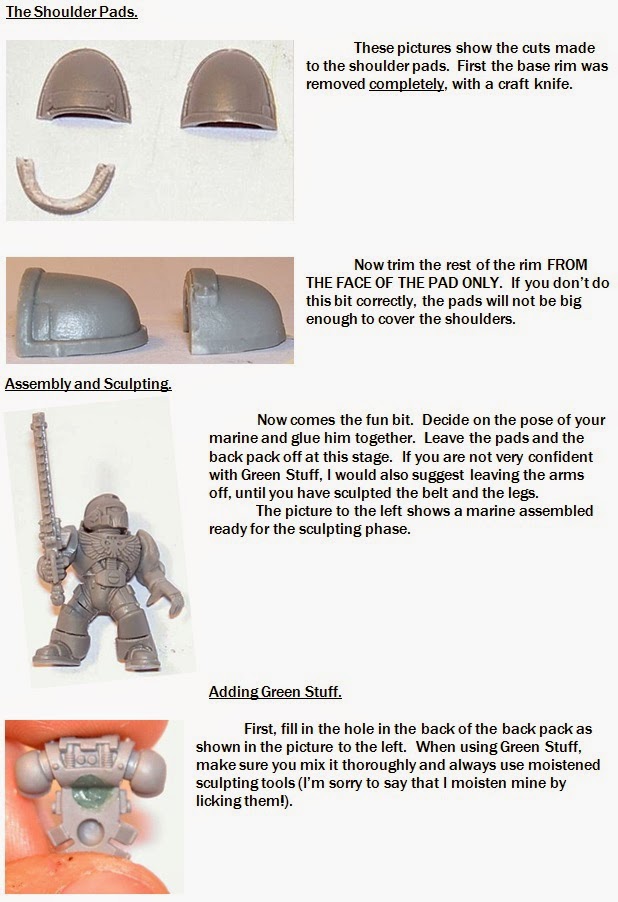 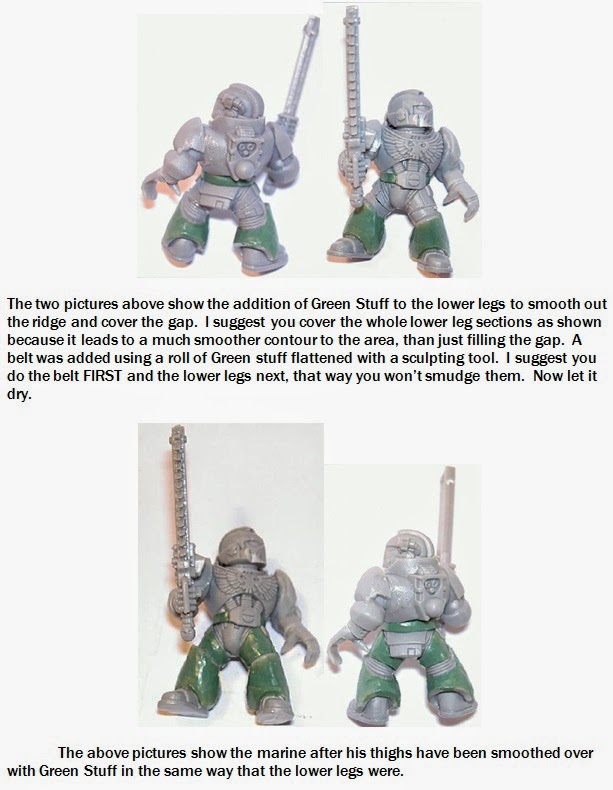 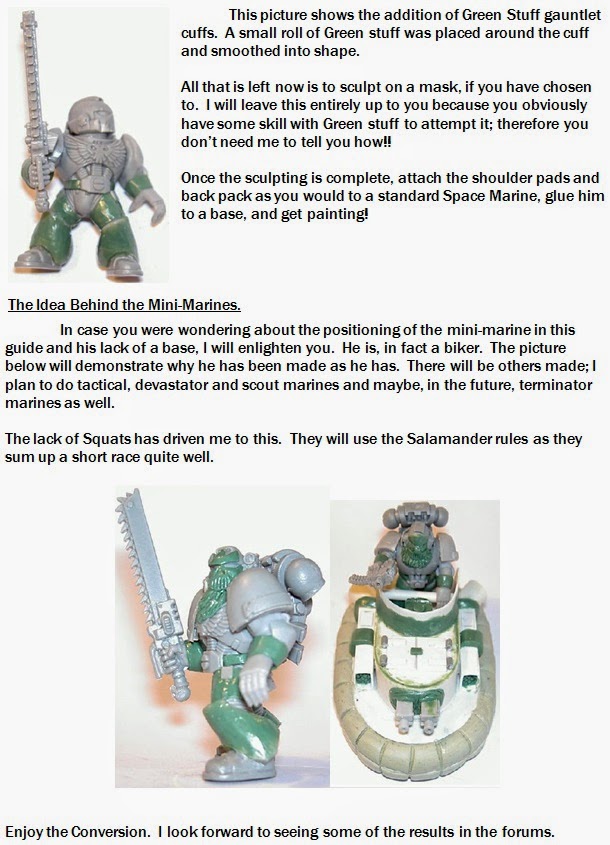 I hope you can make use of the guide and if you do, please feel free to post pix of your efforts and share this page with others who you think may appreciate it.

End of an Era.

Before I start today's post proper, I'd like to welcome Hybrid Alpha to Inso's World. Welcome to the blog and I hope you enjoy wandering around and sharing ideas.

Well, I'm afraid that my hobby mojo has deserted me again. I'm hoping that it is just the weather because I have so many things I want to get done but recently I have just ot had the enthusiasm or drive to do them. I have achieved nothing this week (where the hobby is concerned). All I have managed to do is sort out a few components into poly bags for a Squat squad and shorten a few classic lasguns.

So what else has happened?

Last Thursday was our unit's families day. A time when the families of the service men and women can visit, watch some displays, see some static aircraft, have a wander round some stalls and see a band later in the evening. It was pretty good; the Chinook flying display was particularly awesome (as usual) and the band was a not-Beatles band... and they were pretty cool too. Here are a few pix: 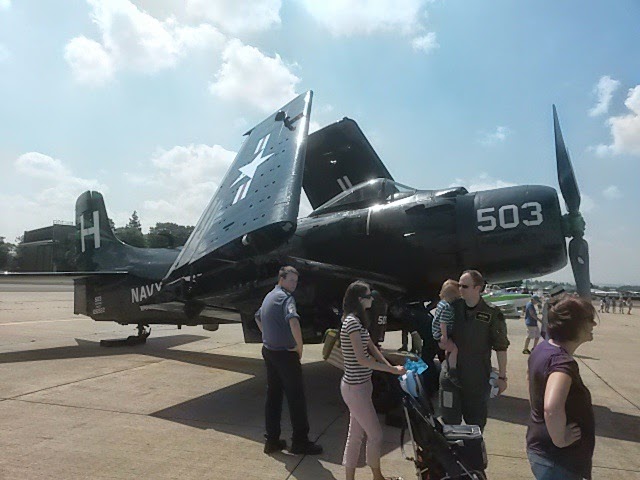 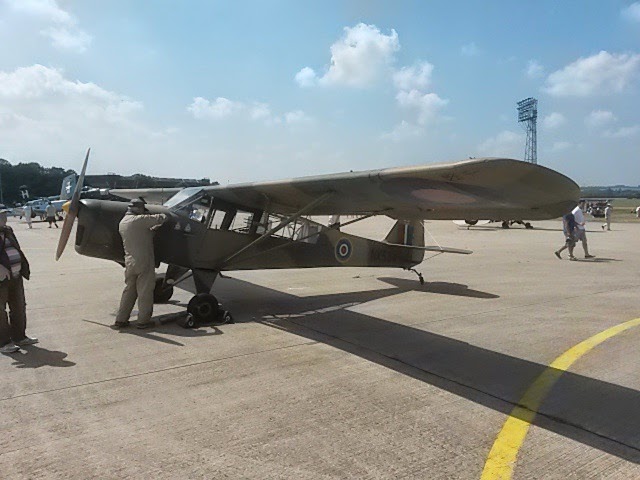 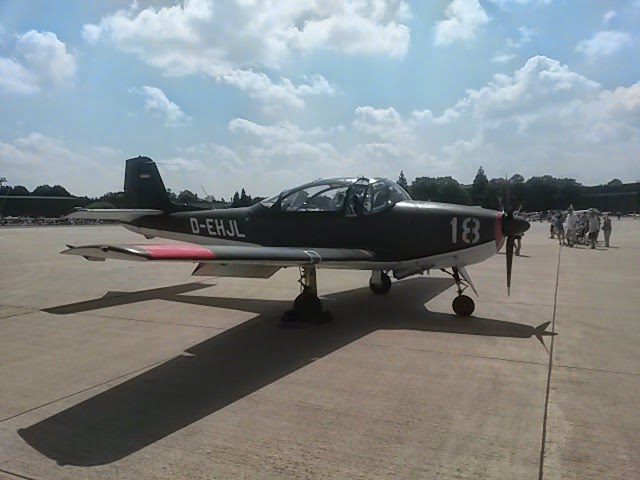 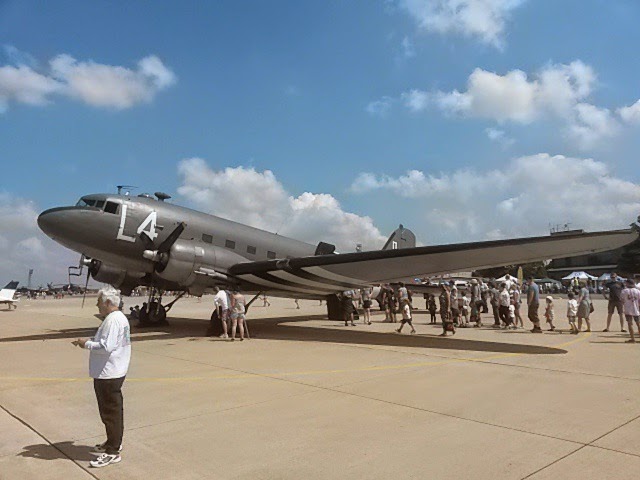 This last pic is of a Puma HC Mk2 helicopter. It is what I have been helping to roll into service over the last couple of years: 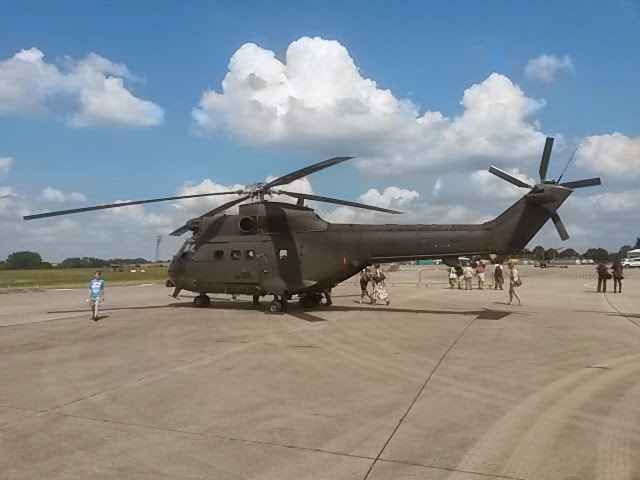 It is an uprated and updated Puma with better engines, better electronics and much better capabilities. When I first left training, the first cab I ever worked on was a Puma HC Mk1 and to be able to be a part of introducing the latest update is humbling. She's a beauty :).

In other news... Didcott now has a few less chimneys at the power station: 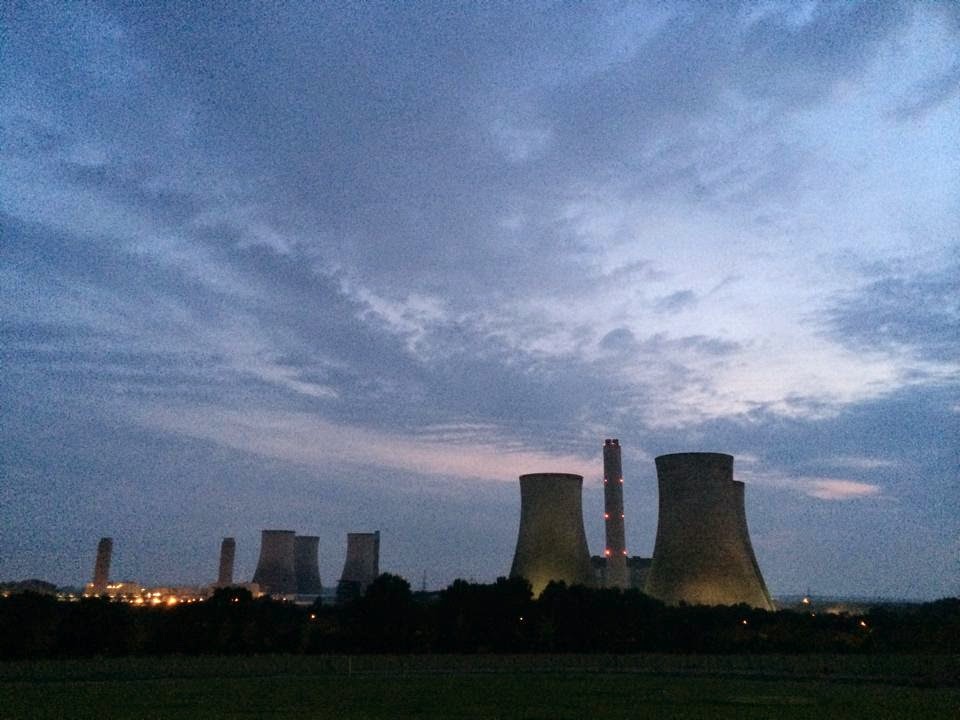 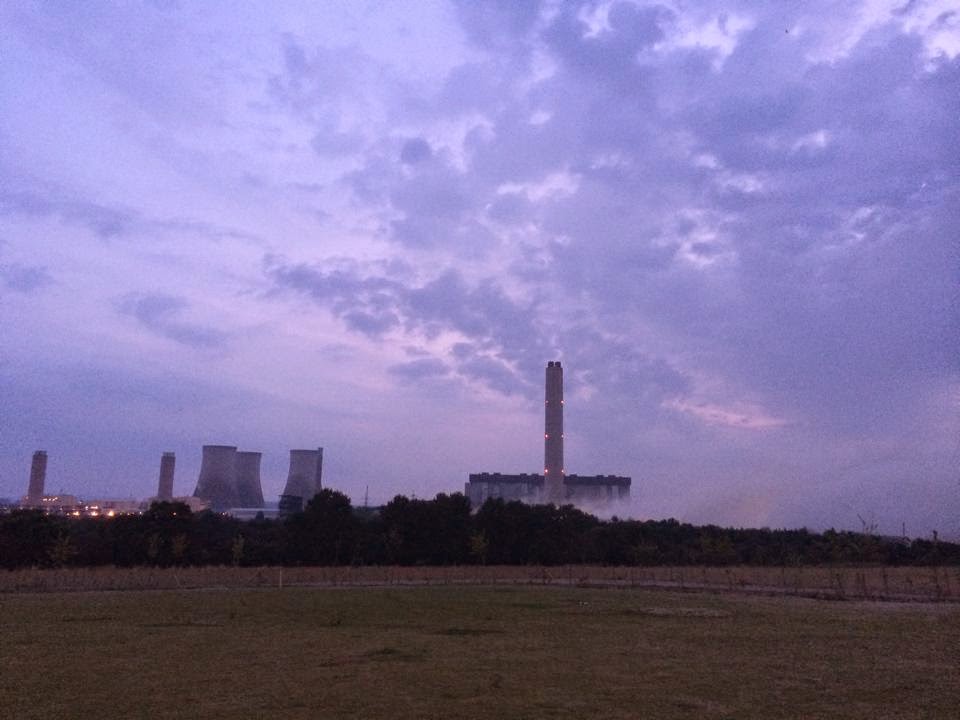 I stayed up all night last night, just to see the chimneys fall. At around 05:00hrs this morning, the three towers were destroyed by a not insugnificant explosion. I was a long way away (these are NOT my pictures, I was directed to these on Facebook) and only saw a tiny spectacle... but a few seconds later, I heard the bang that went with it. As a result, I am tired but am very glad that I saw the end of an era.

And what does it prove?

See you from the back of the HMS Pinafore!
Posted by Inso at 13:43 2 comments:

Holiday round-up and the FunVee Project.

Before I start today's post, I'd like to welcome Baconfat to Inso's World. Welcome aboard and please make yourself at home, take any ideas you wish and be sure to comment on the posts.

So... today is the last day of my week's holiday. It has been a busy one with day-trips here and there, swimming, lounging, drinking, feeding the ducks, getting the car serviced/MOTd and robins fledging... and that is just the tip of the ice-berg.

It has been really... REALLY humid over the last few days and I have been exceptionally lethargic so hobby-stuff hasn't been hugely on the agenda but I have been ticking along with what I am now calling the 'FunVee Project' (create a Space Dwarf vehicle that I can cast up).

You may remember this from a post in June: 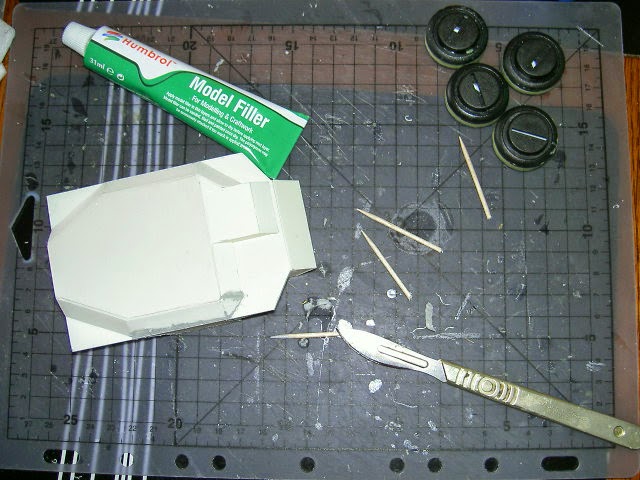 Well, it ended up at this point before I realised that it was just too flimsy to even consider casting it: 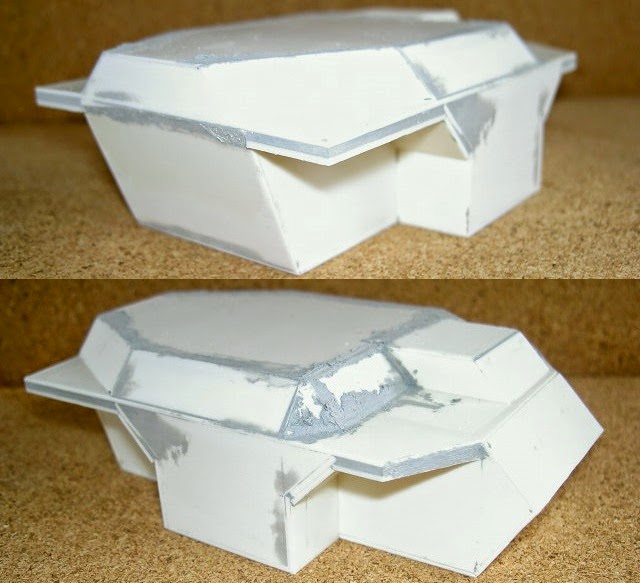 I also decided that it would be awkward to cast as a result of it being fully assembled and some of the shapes... so a rethink happened and I ordered a lot of (thicker) plasticard from Antenociti's Workshop. Once everything arrived, I set to building a slightly different shaped vehicle in modular form. This is the point I am at now: 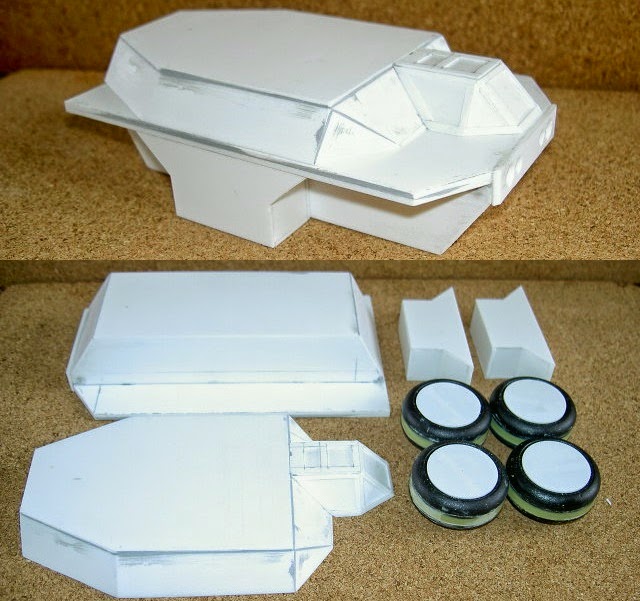 As you can see, I have started to put a small amount of detail on but I am planning to keep things fairly detail free so that I can change options without having to build new modules. The idea behind the original vehicle was to build a larger 'Humvee' type vehicle that was armoured and quick. It needed to be able to carry a squad of 8-10 Space Dwarfs and be useable as a counts-as Rhino vehicle (like the ones Games Workshop make). In order for that to happen it needed rear, side and top access and the option to add a storm-bolter/HK missile on the top. I didn't want a Rhino clone (hence going for four wheels). Because I am making it modular, it gives me the option to experiment a bit... so I can add extra wheels on the side or swap them all out (at a much later date) and add track units if I want to. Here is a rough idea of two of the options: 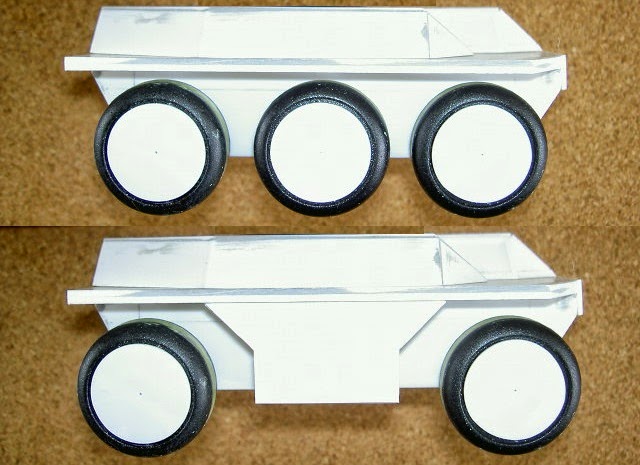 Obviously, things are at a very WIP state at the moment but the plan is to make modular components to be able to have a four wheeled Rhino/Razorback/Predator (APC/IFV/light tank), and a six wheeled truck/transporter with a possible later addition of tracks (either standard ones or smaller track unit that replace each wheel individually... giving the option of a halftrack). The various details will be separate so you just glue them on where you fancy... or leave them off if you want to.

So... there we go. I still have a long way to go yet but from little acorns; great oak trees grow.

This weekend is the start of a week's holiday for me. I won't be going away for the week... just occasional day-trips... so it means that I have plenty of time to chill out and see where the mood takes me. So far, it has taken me to Reading and Henley but I expect to go a little further afield and dip my toes in the sea somewhere.

Over the last week, I have come to the conclusion that a vehicle I was working on wasn't robust enough. So I went online and bought a bunch of plasticard from Antenociti's Workshop. Not only are the prices reasonable but the delivery time was very quick... so I can recommend them to everyone now. It means that I now have what I need to start afresh and make a nice robust vehicle that is suitable for casting.

In other news, I have recently joined a new forum called Random Platypus. It was originally a 'Not Frothers UUK' but now it seems to be gaining a shape of its own. As a result of joining the forum, I have taken up a challenge to paint a squad in a certain time-frame; which means I have picked up a brush again and have started to paint these:

They are the first squad of converted Rogue Trader Imperial Guard that have been turned into Squats. I have finished a 'pre-base-coat' which I will now call a 'disgrace coat' because it is a lot messy... however, it is a start and will hopefully motivate me to continue with them.

I have been browsing around and have now discovered that Prodos Games has the new style Vulkan up for sale. Here is a pic: 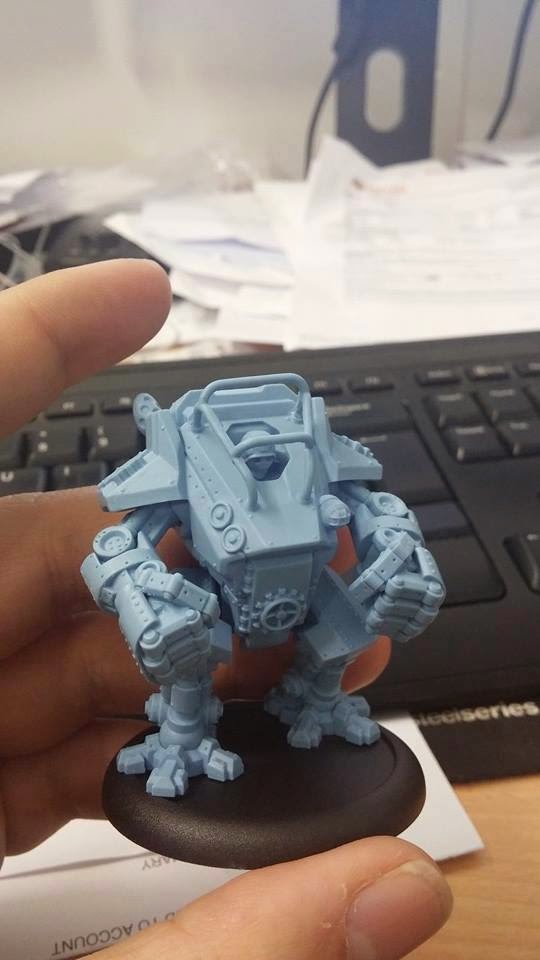 It is a gorgeous little model that has a choice of weapons and is very much worth a punt at £14.99. It is also perfect for my converted Squats to use... so I very much expect to be getting one or two in the future.

And now for a complete change of direction... the Robins are nesting in out kitchen extractor fan again. I managed to get a very blurry picture of the chicks and there are at least two so once they are more established (and I have my ladder back from my friend), I will get some better pix that are good enough to show off. I am glad that I followed the advice I was given; not to clean the nest out after the first clutch. Isn't nature great?

See you from the construction table!
Posted by Inso at 13:17 1 comment:

This week, I have not spent any time on the hobby at all. I have been enjoying life, socialising and drinking... which seems fair enough to me so this week I'd like to draw everyuones attention to the Forum of Doom's 'Unofficial Diorama of Doom 2014' competition.

Here is a link to the competition rules:

Basically, it is a yearly competition that encourages those who give it a go, to build a themed diorama using miniatures from one of the Forum of Doom companies. There is no prize, just bragging rights and the opportunity to show what you can come up with. Here are two which I built (not winners): 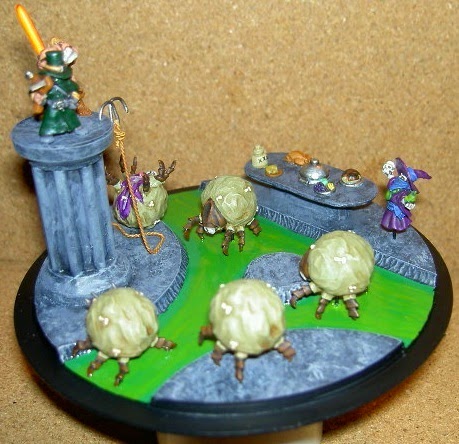 Over the last couple of years, there have been size restrictions but not this year!

The competition is open to anyone who wants to have a go and there are two themes that you can chose to use:

They mostly come at night... mostly

You can even choose to incorporate BOTH themes in the same diorama... and if you want you can enter more than one.

So please check out the very minimal rules, start collecting bits and bobs together ready for the event to start on September 24th and prepare your ideas.