A bit of an update.

It's been a few months since my last post but things have been ticking along; even though it may have been a bit slower than usual.

Life is okay...my mental/physical health has been a bit up and down but when things are good, I am managing to create and do okay... at other times, I do what I can.

Poppy has really settled in and has become my little friend. She is growing nicely and has really developed her personality. She can be completely crazy at times but she always seeks company and loves to have cuddles and lap time. 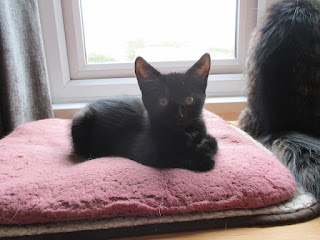 Click the Pic!
We are now looking to get her neutered so we don't have to worry about her having kittens. Our three other cats tolerate her... she is very full-on at times so in time I'm confident they'll get on better.
Hobby stuff has been pretty good too. As I mentioned in my last post, all of the sculpting for the big Space Dwarf project is complete and now, I have all of the miniatures in my possession so I am in the process of cleaning up the last batch of troops, ready for the big "army organisation day"... when I arrange all the troops into their designated positions and make sure that I get a varied mix of poses in the process. 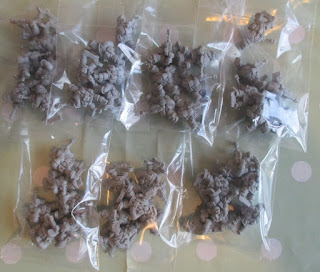 Click the Pic!
While I was waiting for the last batch of troops to arrive, I was not idle. I decided to make myself present in the army and converted one of the Dwarf Officers to represent me: 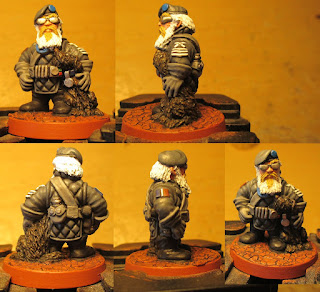 Click the Pic!
It'll act as a proxy Air Force Advisor in the company command squad. When I had finished this one, I also decided to have a bit of fun and convert another officer and this is what I came up with: 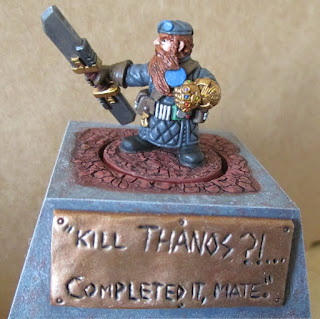 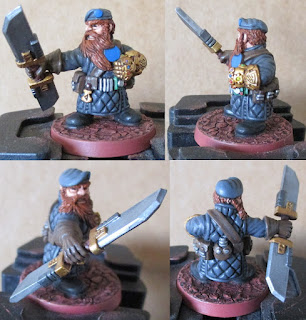 Click the Pix!
It'll act as a Captain in the army but will most likely just be for show.
On a slightly different note, I decided to take a little bit of a detour towards Chaos and have been converting a small group of miniatures to be followers of Khorne, the blood god. Again, this is just for fun but it was also a nice little palate cleanser. I haven't finished them yet but there will be eight in total... here are the first three:

Click the Pic!
They aren't going to be particularly demonic... just 'flavoured' a bit. Once they are all finished, I'll post a little bit of background on them... just to add even more flavour.
Finally, I have returned the Storm Lord to the work bench and have been getting a bit of filling done... 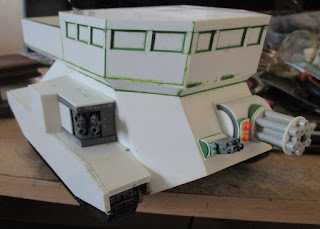 Click the Pic!
So far, I have filled a few gaps, contoured the window frames, added the hull heavy bolters and made a wall with a doorway to allow access to the rear firing deck. In the image, the little las-cannon turrets have been removed, just so they didn't fall off during the work (they will be refitted at some point).
So... as you can see, I haven't been idle.
In other news, I am also sculpting a miniature for a friend so that it can be used in a game that is being played at Salute this year... again, once it's done, I'll post images.
So... what have I got planned next? Mostly, finishing things off... most likely in something like this order (depending on mood):
1 - Finish the Salute sculpt.
2 - Clean, base and prime the remaining batch of troops for the army project.
3 - Finish the little Chaos project (sculpting).
4 - Arrange the troops for the army project and number everything, ready for painting units.
5 - GET PAINTING!!!!
6 - Start thinking about the next unit for Macrocosm Miniatures (Close Combat Dwarfs).
After all that, you'd think I'd run out of stuff to talk about... well... you're right!
See you from the naughty step!
Posted by Inso at 15:54 5 comments: