May... the dawn of a brighter future.

It's May and this month is always special because it has Helston's Flora Day to look forward to... and this year it was back after a three year absence... but Flora Day always has an Eve...

The evening before Flora Day, I had my hair shaved off for charity and raised nearly £900 for the Cornwall Air Ambulance Trust. The landlady of my local pub (the Rodney Inn) did the honours and we raised a nice lot of cash, on the evening, to add to the pot. From a "hairy bear" to this in one short haircut: 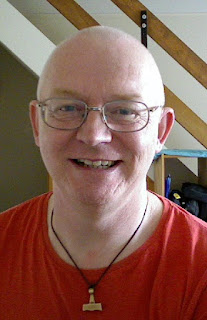 Click the Pic!
I'd like to thank everyone for their support and their kind donations.
Flora Day was BRILLIANT! I spent the entire day in the Rodney Inn; enjoying the hospitality and watching the dances as they went past. I had lots of visitors during the day and the event itself was amazing... beautiful weather, packed streets and lots of local businesses doing a roaring trade. Proper job!
The following day... the wheels fell off.
I was contacted by the local vet and informed that my cat had been brought in and was deceased. Yep... my handsome, awesome, complicated cat, Sam, has passed away: 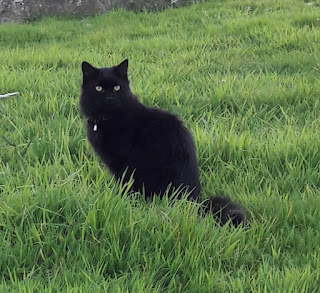 Click the Pic!
It seems that he was knocked down by a car and killed instantly... which, I guess is a blessing because I wouldn't have wanted him to suffer. He was such an interesting cat... and he had his issues... but ever since he had an accident with his tail, a few years ago, he suffered from nightmares and always chose to come and sleep near me so that I could comfort him, when he had them. It's almost like his job was done and he was taken away... because I am now Long-Covid free and feeling much better, mental-health wise.... and now he is nightmare free.
Anyway... I'll miss him but have such fond memories of him. He was my boy...
So... I'm better now and I have got myself a job; volunteering at the Cornwall Air Ambulance Trust. It's three mornings a week and I'm loving it. It was a complete coincidence but one of my friends got the manager's job and I was pointed in their direction. Happy times.
It seems like everything is working itself out.
Hobby-wise, I haven't managed to get much done... apart from a small amount of painting. I managed to complete the army command squad for my Squat army:

Click the Pic!
... and have almost finished the first platoon's command squad as well... but I don't have a pic of that... It's almost like life is better than sitting hunched over a table, painting or sculpting, at the moment... strange.
Hopefully, the improvements will continue and I'll have more stuff to talk about next time.
See you from the road-side!
Posted by Inso at 14:54 4 comments: