Before I start... Welcome Dave Kelly! I hope you enjoy pottering around the grounds and hopefully gaining a little inspiration here and there... but be warned! Don't stray too far from the paths or you may become lost.

This week has been pretty bad for sleep so I have steered clear from most of my hobby stuff. I did, however, manage to clean up ten Mantic Forge Father, Forge Guard and partially assemble them, ready for conversion but I haven't bothered with pictures because they are just standard (at the moment).

In other hobby news, the two 1/35th scale Panther tanks that I ordered, arrived this week (as did a Megaro Zamack kit that I was lucky to win on Ebay for a reasonable price - only one more kit to go and I have the full set)... so I am now in a position to convert two more Panther-Russ tanks.

In the real world, I have started to assemble my storage shelves so that means that I am beginning to think about unpacking some stuff... however, the shelves need to be finished before that so I still need to have a level head for long enough to build them.

Yesterday, we picked up a new car and decided to have a little potter over to Marazion. The weather was extremely windy and we were not too surprised to see a host of kite surfers out on the sea... 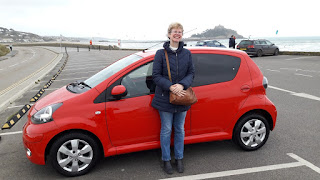 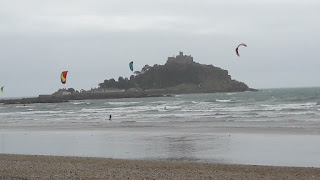 The car is only a diddy one but it's all we need for pottering around in. In the second pic you can see St Michael's Mount and a few of the many kite surfers.

Well... that is about it for now. Hopefully, I'll sleep better this week and be able to achieve more.

See you from the peak of the mountain!
Posted by Inso at 11:45 No comments:

Time is flying by and everything is slowly falling into place. All I need to do is start getting a bit more enthusiasm but my lingering chest infection is still slowing me down... otherwise I would be a wood-working, storage building monster!

From a life perspective, my wife and I are nicely settled now. I haven't started looking for a job yet but my wife starts her job, full time, on Monday. My RAF pension and lump sum have arrived and I am happy to discover that I will only need to work part time in order to top up the monthly pot so I will be able to pursue some charitable concerns and that is REALLY great! It is also great that my wife is supporting that idea and is happy for me to be directing some of my attention towards a little bit of altruistic endeavour.

Last night we had a great evening out our local pub; a pub where the landlords instantly made us welcome when we arrived and is now filled with people we call friends. There was a local band playing and the pub was packed... a great sight and I hope a very profitable one because the landlords work very hard to make that place what it is.

Yesterday, we went to a car dealer's and bought a little car. It was a complete catalogue of errors from start to finish. First we had to wait a while due to the dealer having another person to sort out. Then we asked for a test drive but the battery was dead... so it was power-pack started, but needed petrol so the dealer took it to get fuel and on his return the car had picked up a puncture. So we were offered a test ride in a similar car... the first one had a flat battery, the second had no fuel and couldn't be started and the third one... was fine... so we went for a test drive. We liked the test drive so we bought the car with a dead battery and flat tyre (they will be replaced before we collect it next week). The poor dealer was so apologetic! I then explained to him that the moment 'our' car started being awkward, that was Karma's way of telling us that it needed to come home with us. I got a strange look but he chilled out after that. So next week we collect a little car with a tiny engine to potter around Cornwall in and once our other car runs out of MOT etc, it will be sold on.

The main reason we decided to get the car now was because I have a leaving do to attend in a few weeks and I needed transport and now that my wife is commuting to work I couldn't have the car... so we brought forward the car purchase JUST to get me back to Oxfordshire for a mate's leaving do. How's that for dedication?!

When I left the RAF I wanted to get involved with the local community, change direction with work to something more manual labour oriented and join some charities to help out. I think the community aspect of my plan is going well and once I get a job I will be able to tick the other two boxes because I will have an idea of what the work/spare time routine will be.

So... onwards and upwards.

OK... I'll share my hobby stuff now. First up, I have finished the transport and tank for now (counts-as Leman Russ and Chimera): 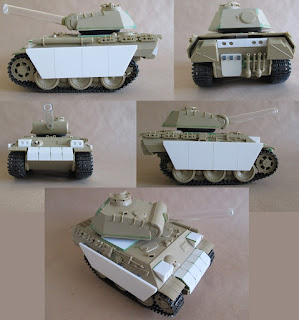 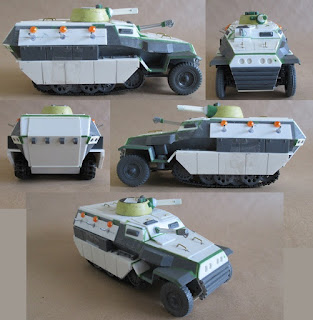 I say 'for now' because I may revisit them a little, once I have put together a few more. Speaking of putting together a few more, I now have three more Hanomag kits sitting on a shelf with two more Panther kits being delivered at some point. I would rather convert a couple of Panthers first so the Hanomag kits will sit for a while. I think that I will stop at three Panthers because I want my army to be more geared towards infantry and not loads and loads of tanks. With three 'counts-as' Leman Russ tanks, I can fill either one or three heavy support slots, depending on where the army leads me in the future.

As you are aware, I have also been working on my Exo armoured troops, namely the Wolverines. Well, they are now finished: 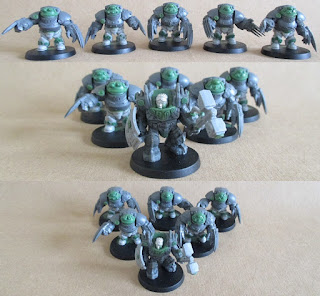 They are pictured above, with my Captain Lysander proxy. I have a backstory for the Wolverines but I will share it at a later date however, they are weaponised mining suits and are worn by a full unit of female Squats (and with Lysader also being a woman, they are her fighting escort).

Now that these are done, I can put them with all the others I have finished: 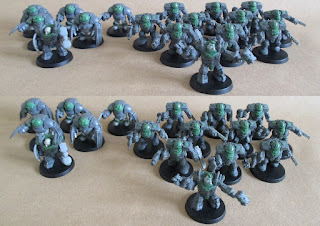 This coming week, I am planning to sort out the legs and see how I am going to put them up for sale. As a result of the interest that I have received, I will be looking at getting more cast up... so I am probably going to have to be a bit clever so that it is all done fairly... which is one reason why I have taken a while to get them up for sale. I must admit to being very surprised at the response and have been overwhelmed by it. Who'd have thought it?

Well... that's it for today and I'll catch you next time... but before I go, here's Sam; rolling about on the patio in the sunshine yesterday: 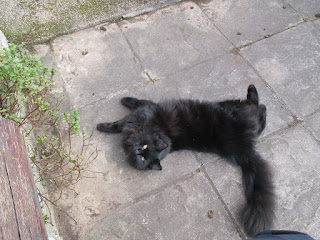 Hello again and welcome to Inso's World on a positively dreary Sunday afternoon.

This week has been another slow one because I have been carrying a cold and cough which has, for some reason, played havoc with my enrgy levels and the steadyness of my hands. As a result, I have chosen to leave the Wolverines well alone and focus on my vehicles.

The Hanomag pattern Chimera has seen a small amount of work; mostly filling gaps but I was unable to progress as much as I wanted because I needed to wait for some 4mm semi-spherical rhinestones to turn up from EBay. Now that they have arrived, I have got a bit further but I will be saving the pix for the finished vehicle now.

The other vehichle (that I am calling my Panther Russ) has progressed a lot since the last picture I showed on here. As you can see, it now has a turret and some additional bits and bobs: 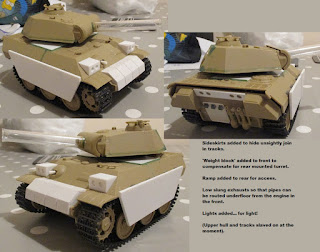 Since the pic was taken, I have added more details and filled a few gaps so I will post additional pix once both the armoured vehicles are finished.

So while I am ticking along with these vehicles, I am thinking about power armoured Squats and what they would look like if they were not influenced by Imperial design. I am of the opinion that the Squats would hark back to their roots and would have long armoured coats. With this in mind, I have decided that they would have a powered exo-frame rather than a powered set of armour. I am not really able to explain what I mean so I have started sculpting a test model. Hopefully, it will take shape over the next week or so... but it all depends on how I feel.

In other news, I have not forgotten about the legs that will be going up for sale soon but, to be honest, at the moment I really am not in the right frame of mind to faff about with selling stuff because I just don't have the energy. I will try to get it sorted soon though.

See you through the gloom!

Nurgle has come to tea.

Hello again and welcome to Inso's World... but I wouldn't get too close, if I were you... Nurgle is in the house!

Yep, this week I have been filled with cold so I have really not done very much of anything at all. I did manage to get to the pub a couple of times but that was to celebrate some good news and also to watch the rugby.

This week has been a bit of a waiting game. My wife has been job hunting and attending interviews; culminating on a new job offer on Friday. That is brilliant news as it is the start of us both building a routine. Soon it will be my turn but I am in no immediate rush. My wife's new job meant an evening in the pub on Friday with me coughing all evening... but we celebrated well.

Yesterday was a day in the pub watching the rugby (well done England!).

This week also saw the birth of my first Great-Nephew, little Arthur. He and my niece are both doing well and it was lovely news. I now look forward to meeting him.

With regards to hobby stuff this week, I have had neither the inclination or dexterity to do very much of anything. That said, I have managed to put a few details on my Hanomag pattern Chimera: 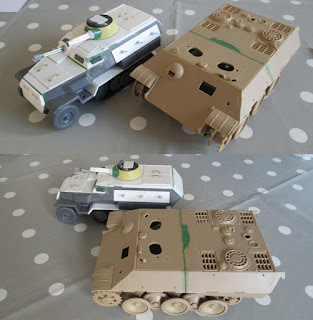 The Hanomag now has some hatches and some lights but I still have a long way to go.

I need to apologise for not progressing the leg sales thing but I have really not been very interested in anything this week, sorry.

Hopefully, I'll shake this cold off this week and get back to a bit of carpentry and hobby stuff.

Well, that's about it for now.