Today's post is just one to put together a list of Space Dwarf miniatures that are currently available. It will not be a complete list but it will most certainly be a starter for ten. It doesn't cover 3d files... just miniatures.

1. Macrocosm Miniatures have a number of different styles of Space Dwarf in their sci-fi ranges.

3. Gydran Miniatures have a wide range of Space Dwarfs, including power armour and robots to go with them.

4. Hasslefree Miniatures have the Grymn which also have powered armour to bolster the standard troopers.

5. CP Miniatures have Runts, which are a range of Space Dwarfs.

6. Battle Valour Games have a few squads of Space Dwarfs in their sci-fi range (you'll need to scroll for them and they are spread over a couple of pages).

8. Forge World have a couple of Squats in their Necromunda range.

9. Bridge Miniatures have Dvargs in their Mutants and Madmen range.

11. Hardcore Miniatures have some new Dwarfs on the way.

13. Uscarl Miniatures have a squad of Space Dwarfs.

14. Ramshackle Games have some Dwarfs... including bikers.

15. Scibor Miniatures have a range of larger sized Dwarfs.

16. Grim Forge has a couple of Space Dwarf items.

17. Old School Miniatures has a Space Dwarf and a bunch of Chaos Space Dwarfs as well.

18. Kromlech have Dvergr Dwarf Commandos (you'll need to scroll to find them).

19. Victoria Miniatures have a Dwarf character.

20. Black Cat Bases have a range called the B'dass, by Moonfleet Miniatures... scroll down on the link.

This list will be updated as I find more miniatures on my travels through the interweb.

See you from the scout party!

News from the front.

Keeping the boring stuff short... I still have long Covid... it is still causing me issues and preventing me from returning to work... I am fed up of it and want it to end but it is just a matter of patience.

As I've mentioned before, I am still able to get things done so I have been spending most of my time geeking-out on the internet, sculpting and doing a few chores. I am trying to get out for walks on a regular basis but they are a mixed bag and can be quite a struggle.

There is one thing that I have found, that has been really important to me and that is Twitch. Twitch (if you didn't know) is an on-line, game-streaming site that has a chat function so you can communicate with the live streamer. Being stuck at home on my own a lot is a lonely business but Twitch has enabled me to make friends with people all over the world and has also filled the void of not having people around all the time... so if you are feeling lonely or just fancy watching some video games, I'd recommend it.

Now let's get on to the sculpting side of things.

The last Kick-Starter for my sculpts (plus a couple of others) was run over the last few weeks and has now finished. It ended up doing pretty well and can be viewed here:

Seeing as sitting on my arse is something I can do, I have managed to get a lot of sculpting done, over the last couple of months. It started with the Standard Bearer that I showed off in my last blog post and moved on from there...

The first couple of sculpts to be finished were a Trooper with Heavy Flamer and a Lasgunner: 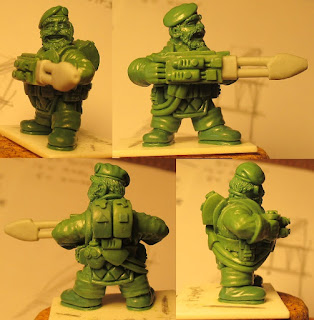 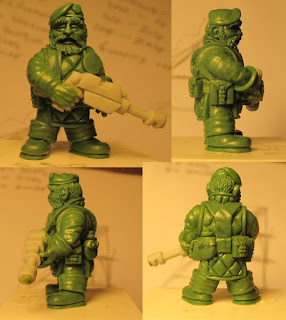 Click the Pix!
I wanted the Trooper with Heavy Flamer to look cheerful and the Lasgunner to look bored or reflective and I think they worked out okay. The next couple of sculpts were a pair of Medics: 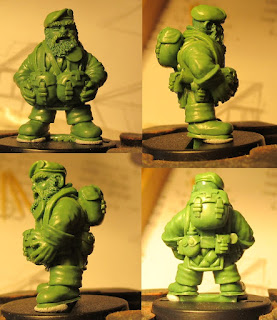 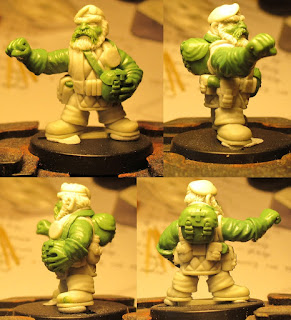 Click the Pix!
The idea behind the two Medics was that they carried pistols to defend themselves and those under their care and also enable them to carry more kit. One of them has taken this to an excessive level and the other is more able to dash about and is signalling to a wounded Trooper to "stay where you are and take cover" so that he has extra time to get to him.
Following on from these two, I sculpted a Trooper, throwing a grenade: 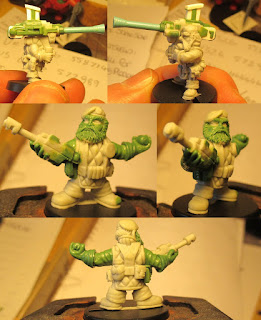 Click the Pic!
This sculpt was a direct response to forum feedback. Someone suggested that I should make a Trooper throwing a Grenade and a few people agreed... so I sculpted one. You will also notice a Heavy Weapon Trooper in the above image. He is one of the original ones that I sculpted a while ago but he is carrying a newly built weapon; an Auto-Cannon. I needed to finish the Auto-Cannon so that all of the Codex Heavy Weapon options were covered (along with the Heavy Flamer Trooper). After this, I noticed that I only needed one more Lasgunner pose to complete the Lasgunner poses on my list so I converted one at "high-port-arms": 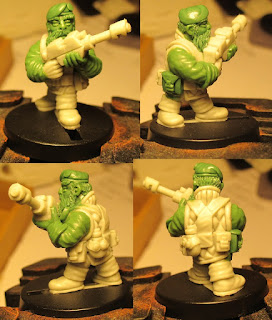 Click the Pic!
Once the last of the Lasgunners were finished, I packed up the little group and sent them off for casting/production to Macrocosm Miniatures... 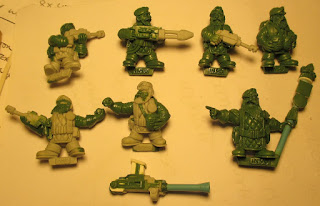 Click the Pic!
After sending off the miniatures, it was time to take stock and see what was left... and it turned out that I have 14 sculpts/conversions to finish for the basic list I have prepared. These are:
1x Colonel
1x Captain
3x Comms conversions
9x Lasgunner conversions
Once I receive casts of my latest batch of sculpts, I will have all of the bodies needed for the remaining conversions (including a few that are on my workbench) and then I can take a pause before embarking on the next wave of miniatures (a Close Combat Squad, Engineseer, Servitors and Advisors) but I haven't drawn up a list yet so that I remain focussed on the current project.
As it stands, I am working on a Captain for now and will be putting new heads on a bunch of Lasgunners while working on the Colonel. During this process I will be deciding which additional Lasgunners will get a Comms Set... so there is still a bit of work to be done.
PHEW!
In other news, I have bought another box of Kastelan Robots to play about with and will be converting them into smaller, engineering suits... Not to mention there has been some work going on with some mecha... but that will be for another time.
In the meantime... 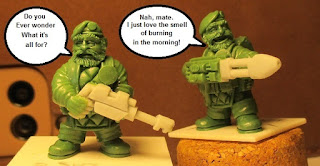 Click the Pic!
Stay safe, follow the Covid restrictions and look after the ones you love.
See you from the front line!
Posted by Inso at 08:51 3 comments: