I received a few pix from Inso today. First up is a pic of his OGrymn squad that has been in the process of paint for a good couple of weeks now. This squad is the final squad for his green army and as a result...Inso is very pleased to say that his green Grymn army is now complete!

You may notice that Charlton is a bit pale. He is actually an albino and will 'count as' an Ogryn 'Bone Head' sgt for the squad.

Next up is something completely out of the blue. I was almost expecting pix of more blue troopers but instead I received this:

Apparently, this is a Beetle-bot. It is a Grymn construct that is used to enter and clear buildings. The miniature is currently WIP and needs a few areas to be tidied up and a few details to be added. Not bad for something that started life as a Necron this morning. The good thing is that there are another eleven possible donors for more Beetle-bots.

Inso hasn't really achieved very much recently so the fact he has sent some pix over is a bonus. These are two miniatures from Heresy. They are the Major and Ellie from the sci-fi range. Inso has decided to paint them in the style of Rogue Trooper (from 2000AD comics) which means that they will be Genetic infantry with blue skin. In the first pic, the colours are there and they were considered finished apart from the base:

In the following pic, the base has been painted and because Inso wasn't happy with the first paint-job (after seeing the pic), he has added another highlight layer to the skin and clothing: 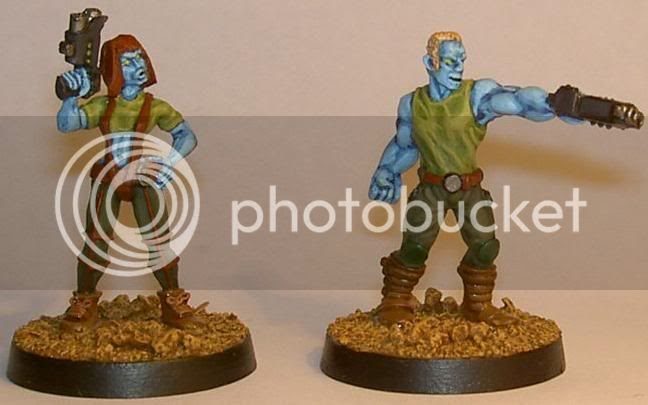 So what else has he been upto? Well the OGrymn are back in the cupboard for the time being, the Tyranids are back in their box and so are all the Grymn.

On the table, at the moment, are five VASA marines from Void, a small male miniature which is being converted for a sculpting competition and the start of a completely different sculpt...a Grymn jetbike (which is being sculpted with a view to casting it in the future). Inso has said that at the moment there will be no pictures because he doesn't have much to show...but the jet-bike and competition conversion are coming along nicely.

Apparently it rains a lot in NI. It gets a bit depressing. As a result, things don't get done because you really can't be bothered. Well that's what Inso has said anyway.

What does it mean? It's been a slow week, that's what.

This week Inso has started to paint the two OGrymn. He has based them and painted the bases. He has undercoated them both and one of them now has albino skin. Unfortunately, the rain set in and that is as far as the painting went.

So...what else then? Well, Inso has prepared a group of Vasa marines (for Void) and a couple of sci-fi mins from Heresy. There are 12 in all and they have all been cleaned and glued to bases. They still need to be properly based (GS and sand) and painted. He has another 14 Viridian marines to do but one step at a time.

Anything else? Tyranids, that's what. A while ago Inso assembled a big box of Tyranids that consisted of 20 Gaunts, 3 Warriors and a Carnifex. Today they got pulled out of their box and had sand glued to their bases. It's a small step...but it's a start. Inso still needs to do a bit of tidying up on the bigger Tyranids but just getting them out of the box is an achievement.

It is funny really. When the painting dries up, Inso always finds other little jobs to be getting on with. He has been rooting through boxes and sorting things today. I reckon that is the reason the Void miniatures got started...he didn't realise he had them!!!