A bit up and down, this week.

This week has been a bit all over the place.

I have been going to work as usual and have had a really good bunch of shifts; as a result of some good team work. When I have not been at work I have been clearing the garden and on one occasion, while ripping out some rotten wood, I found a very cool toad (which I evacuated to a safe area). I still have a bit of a way to go but the garden is certainly getting there.

Tuesday was a sad day. We had our lovely old cat, Fred (AKA Bouff and the Bear) put to sleep. He was fourteen years old and had been living with arthritis for a good few years (he was on medication for it) but over the last year, had developed some nasty growths in his neck and throat. We kept him going for as long as we could but he had just had enough so he was peacefully put to sleep on Tuesday. 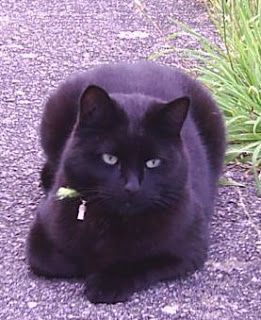 On Thursday, I went to give blood but have been told I can't donate for a year because I am anaemic. That came as a bit of a shock but it could explain some of my tiredness issues. I'll be going to see my doctor at some point, to see what they have to say about things. On the one hand, I am really disappointed that I have to wait a year to give blood again... but on the other, it means that I have six months in order to get another tattoo... so it isn't all bad. I just need to design my tattoo now.

On the hobby front, I have been sculpting a bit but have also been shopping... First of all, I decided that, after seeing the photo below, I needed some Loors: 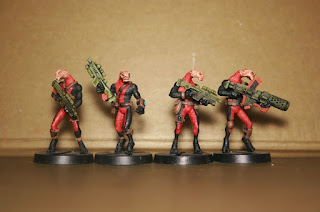 I can't take any credit for the image but the paint scheme really works on these miniatures so I put an order in to CP Models and am now in posession of ten, rather excellent, Loors. When I have some paints out again, these will be top of my list.

While on the subject of shopping, I needed to scratch an itch. I have an idea that has been scratching around in my head and I thought that a box of Dwarf Berserkers would help me to realise things... so I bought a box of "Avatars of War - Dwarf Seekers": 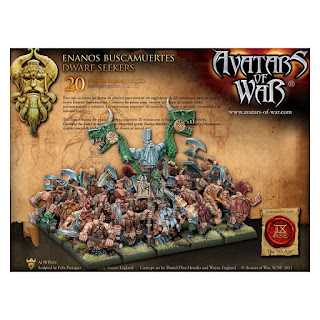 I chose these because they mostly have boots on so I wouldn't need to spend all of my time converting feet. Anyway, without saying what I am converting them into, I have been busy converting a test miniature to check out the concept. I have also putt in a small order to Anvil Industry for some bits to add to these troops... all will become clear, when the test mini is complete.

With sculpting in mind, I have been continuing with the second competition sculpt but have slowed down bue to the above distractions. That said, it is coming along nicely:

What this coming week will churn up, who knows... but I hope it will be productive and bit more level on the luck side.

See you from the apex!

Over the last couple of weeks I have been working, clearing the garden and getting a bit of hobby stuff done... and I've also had to put up with a cold and a continuing lack of sleep.

Work has been good. I am now officially part of the furniture and this has been proven by bumping into workmates when I am not at work and socialising with them... so there's that.

When not at work, and when the weather has let me, I have been clearing the old fence from the garden. I have a way to go but this sort of thing takes time.

The cats are on our minds at the moment. Charmmy is fine, Alfie has had his two lots of jabs and is waiting until it is time for his neutering operation. Sam is still not right. He will be going back to the vets at some point soon and they'll need to look at his tail/lower back... when he's on anti-inflamatories, he is less stiff but you can see he is still not happy. Fred is very much on his last legs and we have been in touch with the vets to discus his humane departure... so we are spoiling him rotten at the moment. I fear that next weekend's post will be a sad one.

... to cheer things up, here's a picture of me and Alfie: 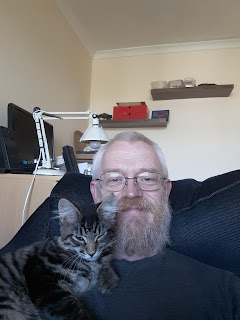 Hobby has stopped apart from the competition sculpting. The Squat Sergeant has been finished: 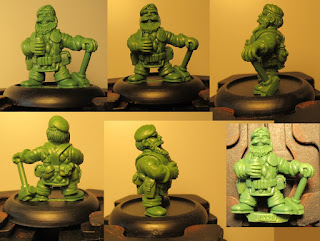 As a result of the Sergeant, I felt that I'd sculpt a bit more while I was on a roll so I have started a second sculpt for the competition:

This one will be a standard trooper with some sort of rifle. He'll have a beret as well but will be pretty basic. I have six weeks (approximately) to finish this one so I may end up sculpting others (depending on how I feel).

In other news, I have a good friend who has decided to join a charity boxing event in order to raise some money for Cancer Research. He isn't a boxer and has some good reasons to support the charity so please feel free to click the link and throw lots of money at this one:

See you from reception!

It has been a quiet few weeks.

The garden is still filled with rubbish from the fence replacement and that is something that is beginning to annoy me.

Sam (my cat) has been very strange over the last week and I think his tail injury is the problem. He will need to go back to the vets again but I think he just needs a bit more time to get well...

... we have managed to coax him into the house after he has been avoiding us for a few days so at least he has a full belly, even though he is currently hiding behind the washing machine. I fear that we have some difficult times ahead, with him.

The kitten is being a kitten. Alfie is either tearing up the house or asleep... so he's a typical kitten. He needs to tone it down with the other cats because he is looking to get beaten up by one of them... you never know, it may do him some good and teach him some 'cat manners'.

Work has been good. I'm still enjoying it but am looking forward to sleeping more because I am in a heavy working environment at the moment and I need to keep my wits about me.

Hobby wise, I have received some brass wire and hole punches from EBay (for sculpting and cutting holes in plasticard for my Epic Squat army bases), I received my Kickstarter pledge from Diehard Miniatures (more on that in a later post), I have pledged for another Kickstarter and also started a sculpt for a Facebook Sculpting competition.

This is the sculpt I am working on and the title for the competition is "the humble infantryman". I have decided to go for a Squat Sergeant 'at rest': 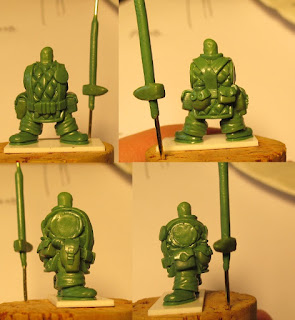 As you can see, he is very WIP at the moment but he's only been on the go for a couple of days so he's getting there.

As for the Kickstarter I have pledged for, it's this one:

I've just pledged for the Dwarves. Time is running out so if you fancy adding some of these to your hoard, get pledging.