What can I tell you? Well, first up, I finished sculpting my Space Dwarf, Standard Bearer: 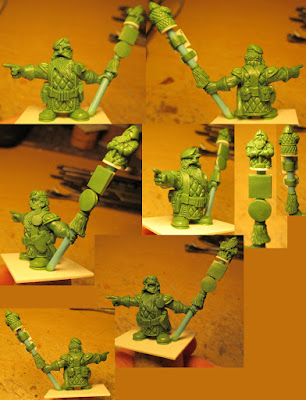 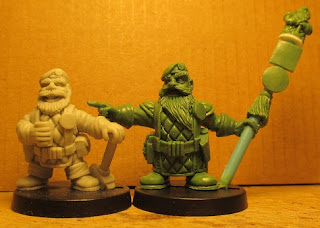 Click the Pix!
As you can see, he's just a little bit larger than his brothers (by design) and wears slightly different armour that helps him to stand out as a champion who is worthy of holding the company standard. The banner topper is about 10mm tall and is supposed to depict a Dwarf version of Thor, sculpted in a 'rustic' style.
The Standard Bearer will be sent off for casting when I have finished a few other sculpts... speaking of sculpts...
I currently have five miniatures on the corks; a Medic, Heavy Flamer, Lasgunner, Captain and Colonel. My focus is on the first three because they have the same boots, armour and webbing pattern. I'll get their bodies finished and then move on to do the same with the officers. Once that is done, I'll go back to the first three and finish them before I finish the officers. Once they are all finished, they'll get sent off to Macrocosm Miniatures, with the Standard Bearer, for casting up.
Speaking of Macrocosm Miniatures, the recent Kickstarter has successfully completed. I am very happy that Chris has done so well on the Kickstarter and also that so many people are happy to buy my work. It certainly helps with motivation for sculpting.
So far, I have provided 21 miniatures (including the Standard Bearer) for the range (this includes full sculpts and head-swaps), with another 15 or so, on the list so I still need to maintain my focus and keep churning them out!
So... life.
I can say with certainty that COVID-19 sucks. I have had it for three weeks and I have had breathing issues, troubles with dizziness/feeling faint and a general lack of energy. LUCKILY, I haven't been bad enough for a hospital trip so it could have been much worse but it has really affected me being able to move about. Sitting down is fine... it's the moving that is the bother.
This week I went to the funeral of my mother-in-law. It was a lovely little service and she was laid to rest with dignity and care. It was strange that only a few people were allowed to the service and that we couldn't gather together, afterwards but at least everything went without a hitch. I drove to the town (about 6 hours driving, each way) and was fine... up until I had to walk anywhere... that was a struggle and I nearly passed out on one occasion. It took an age to recover from even the shortest of walks... but at least I managed to get my wife and daughter to the funeral so that we could all pay our respects. That was the only time I've left my house since Jan 16th... and I'm off to the doctors tomorrow so that'll be a nice trip out...
Anyway...
I'm still here, I'm still sculpting and I'm still happy so it isn't all doom and gloom.
See you from the manufactorium!