I am happy to say that I have a set of Micropanzer powered armour, pictured at the top of THIS page.

I have packed one up to send to a friend but have four left to put to good use. Once I have had a good look at them, I'll post up a few pix with some miniatures for scale. I am not planning on using them as they are but will be converting them to look like a Grymn could fit in the torso/thighs...but I will be able to show off assembled ones before I convert them.

I have been waiting ages for these to be released and they are GORGEOUS!

See you from the happy tree!
Posted by Inso at 21:27 No comments:

Sunday and the smell of paint.

I'd love to say that I have just reached the end of a great week...but I haven't. This week has been marred by all sorts of stuff which has meant that a lot of my hobby time has been repairing a door that was damaged by 'Teen-aged angst'. The smell of gloss paint permeates the very fabric of my house at the moment...and it isn't pleasant. Yesterday, the house was full of the smell of spray paint as I primed some resin tanks...

...So...this week I have been mostly not doing hobby stuff but I have managed to prime the transports for the first platoon of urban troops and finish the command Slingshot in the process: 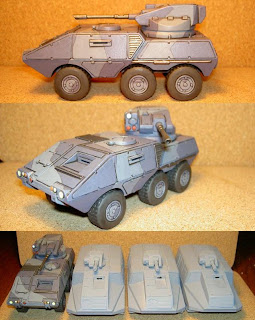 It also means that I have chosen the paint scheme for the vehicles. More information can be found HERE.

On to other things and I have managed to get hold of a 1/60 scale Votoms Scopedog kit. I am just waiting for it to arrive from Australia now. I have a lot of plans for the kit that won't be shared for a while...needless to say, it will be the seed for another army.

Well...a short update today but hopefully, the next one will be filled with all sorts of stuff (I have so many batons in the air that they must land soon!) 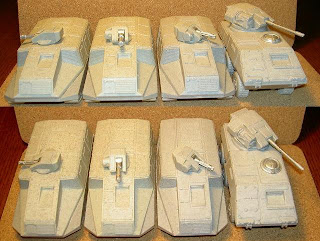 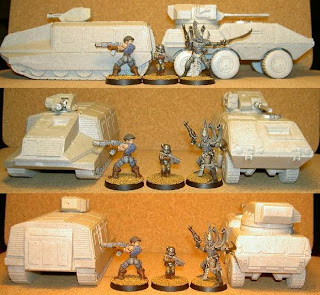 A weekend of travels.

This week has seen a lot of work on the Grymn new model army and you can see the results HERE. Just to whet your appetite, the link shows a painted platoon and some information about one of the support platoons. I've just finished putting the gloss varnish coat on the platoon so they will be ready for decals when they arrive.

I have begun to paint the VASA Black Legionnaires with a view to getting them finished now. I have bitten the bullet and painted them all completely grey. It has meant that the red is covered and it gives the impression of progress straight away. The one down side to this is that I have just opened a new pot of Adeptus Battelgrey...and it is a different colour to the last pot. How the hell does that work? I would have expected it to be the same colour. What it means is that it is a bloody good job I finished the Grymn platoon before I needed to use the new pot. It also means that I will have to get another pot of paint before I paint any more Grymn.

On the plus side, I have received confirmation that my Russian powered armour has been shipped from Micro Panzer and my order from Hasslefree Miniatures has also been dispatched. Unfortunately, I am yet to hear anything from Dom's Decals... but it has only been a week or so... so I won't be sending out the posse just yet.

The Grymn VTOL has stalled a bit because I am trying to find the right sized tubing for he rear exhaust duct...I have various pen-casings but still haven't got the right one... so I am still looking.

So... why a weekend of travels? Well, me and my family popped down to Somerset yesterday to attend my niece's 18th birthday party. I had a good night (even though I was the designated driver) and spent a lot of time in the company of my extended family. We stayed over night in a Travelodge and I drove back today so I have not really had time to do much more than base and varnish a few Grymn. It was certainly worth all the effort though.

This week will see the cleaning and assembly of the first platoon's vehicles and the continued painting adventures of the VASA Void project.

It should be fun.

See you from the bottom of the hill!

Crikey! Where did that week go?

Well, there is still snow on the ground, it is still very cold outside and the time is still flying by like a star when you jump to light speed! I haven't been idle though and have been tinkering along with one thing and another and have managed to get a bunch of Grymn painted up. If you want to see them (and other bits and bobs as well) you will need to click HERE. While on the subject of Grymn, I have sorted a rank structure out for the Urban Army and you'll find it HERE. Add to that, a general sort through the Grymn boxes and a bit of a re-arrange and I have managed to sort out a list of required miniatures to complete a third infantry platoon and a heavy infantry platoon (only 8 Grymn required). It is always nice when a plan comes together.

So...I have been thinking about Grymn fliers and I wanted to put together a VTOL that could operate in a standard atmospheric role. The obvious basis for a VTOL fighter aircraft was the Harrier Jump Jet so I got hold of a 1/72nd scale kit to mess about with. The plan is to shorten it change the wing plan and convert it to have two front nozzles with a single vectoring exhaust duct at the rear. Here is where I am at so far: 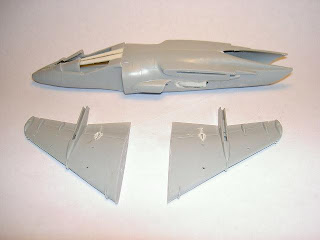 All of the cutting has been done, the cockpit has been widened and I have started to fill in the rear nozzles. Not a lot to show at the moment because it still looks like a Harrier...but it won't for much longer!

That is about it for now. I'll be under-coating the last section of Grymn fro the first platoon today and tinkering with them...it is nice to have my Grymn obsession return with such a vengeance! I hope to get some paint on the VASA troops but I won't guarantee that yet.

Oh...on another note, I have gone DECAL MAD!!! I have hundreds of tiny decals on their way from a number of sources so when they eventually get here, I will be driving myself in to fits of rage as I try to adhere 2x2mm decals to each and every helmet in the new Grymn army...should be fun.

I have also made one of those RANDOM bids on E-bay and I am desperately hoping I don't win...oh dear! A fool and his money are easily parted.

See you from the nice, soft, red, leather couch!

I am sitting looking out of my window at the snow that has settled over night. It seems to be slowly thawing out but I guess it will freeze at some point...just to cause a bit of chaos.

This week has mostly been geared towards Grymn. Not unusual but certainly specialised and subjective...and that is why I have put all of the important stuff on the grymn blog HERE . As a taster, here is the Command Squad for the first platoon that I am building for the urban army:

There is all sorts of other information over at the linked blog-post...so take a look.

Writing has been an important aspect of the week and the story has progressed...but there have been no additions since Thursday so I won't link to it again. I am quite happy with the way it is going and have some big ideas for the finale... something VERY cool.

I have also been thinking a lot about atmospheric, fighter-aircraft with a VTOL capability and of course, the Harrier jump-jet is the epitome of VTOL design. The thing with a Harrier is that it looks like a Harrier...it is very difficult to see it as anything else (so making it sci-fi is difficult)... but I have a plan! I doubt if very much will surface in the short term but I really want to have a small air force and they need to be VTOL. Enough said.

The VASA project is still ticking along but has taken a back seat to the Grymn...so it is little and often there (with no pix to show at the moment).

Well that is about it for now...I am looking forward to getting some miniatures and decals through the post at some point but am saving my pennies for Salute now (April 21st); especially because I now have my ticket.

See you from inside my balaclava!
Posted by Inso at 13:42 No comments:

It's almost the weekend.

I will be glad to see the weekend. Not because I've had a bad week or anything but because I just want to try and get some sleep! At the moment I am getting about four hours a night (at most) and it is starting to dig at my impeccable sense of good humour. It is funny because I am feeling OK but I just want to fall asleep at the most inopportune moments (like during an important meeting that I was quite involved with). It was all I could do to remain focused.

ANYWAY, enough of my bleating...I have been busy painting stuff this week and have so far managed to finish the first section of my urban infantry army...that is four whole Grymn! I am about a seventh of the way though the second section so I hope to have both the command and support sections, for the first platoon, ready to show off on Sunday.

I have also been working on a picture to show off some of the planned helmet markings...it isn't perfect but it will suffice. Add to that a little bit of homework on the army selection and Sunday should see quite an interesting post.

I know what you are thinking...BAH! no pix!...but please bear with me because I have been busy writing this week as well. Click on the STORY to read the continuing adventures of Thorred, T87 and the crew of The Obituary.

That, as they say, is that.

See you from the back of beyond!