I know... there was no post last week but I was fed up with having nothing to post so I didn't think it was fair to post an empty update again.

First of all, I decided to just bite the bullet and assemble a few more Squats to try out some more colours... so I did. This led to me thinking that I would be wasting my time if I went too far with them so once I had decided on a few colours, I started painting a few of my Squat troopers... namely my three Berserkers (they count as Astra Militarum Priests). I haven't got too far with them; just the first rough base-coat BUT it is a start and they represent the first painted troops in the army: 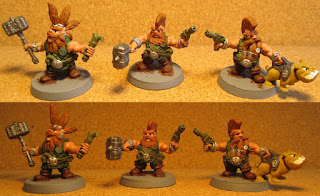 Now that they have a rough base-coat, I need to tidy them up, wash and highlight them but I will be doing them one at a time now so that I have mini goals to reach and get mini wins for achieving them. The first one that I am working on is the one in the middle so hopefully, he'll be finished fairly soon.

In other news, the Halfling Sniper sales have completely dried up. None sold now for two weeks... so rather than get miserable about it, I dug out a strip of some of the 'not quite perfect casts' to have a play with. I remember someone mentioning that they could almost be 'miniature Wookies' because the leaves could double as fur... and this got me thinking... Maybe not Wookies but something more WH40k... so I thought I'd try my hand at a 'counts-as' Jokaero: 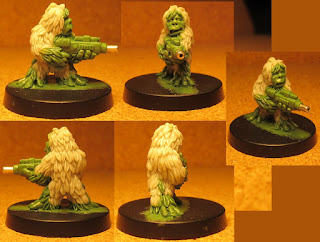 I decided not to go for the 'Orangutan with techno gubbins' and instead went for 'Ape-like character with a gun'. Hopefully, it worked OK and also I hope it gives people ideas about how versatile the little snipers are.

Speaking of Halfling Snipers, you can get them from here:

I think that's about it for today...

...apart from the ever changing face of Inso's World: 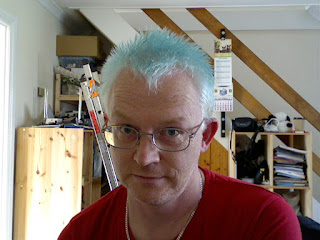 I just can't seem to get rid of the blues...

See you from a different place!
Posted by Inso at 20:40 No comments:

This week has been a bit of a strange one due to lots of personal/family stuff going on. As a result, I haven't had too much time on the sculpting work-face.

That said, I have continued with 'the next big thing' for the Emporium and have also got a bit further with the charity sculpt... so I have managed to get a bit of sculpting done, even if I can't show it off.

One thing that the sculpting has shown me this week is that sometimes, you have to rework pose and proportions when you are working on figures... and I have had to do that on two of my little figures. Luckily, the rework has been successful and I am now happy with the direction they are taking.

Sales of my Halflings and Exo Legs have stalled so I haven't had to go to the post office very much this week (just the once)... so I still have a good few left, over at the Emporium.

This coming week, I have builders working on the house, more visits to hospital with my dad and a few other bits and bobs so I doubt that I will get much hobby time; if any.

It's been a bit of a run of boring posts lately... sorry about that.

See you from the bottom of the jam-jar!
Posted by Inso at 14:54 No comments:

This week has mostly been completely bland. I have done the odd chore here and there, done a bit of sculpting but not really very much more...

However, we did have a call from the bat rescue people and we were lucky to get our rescued bat released again: 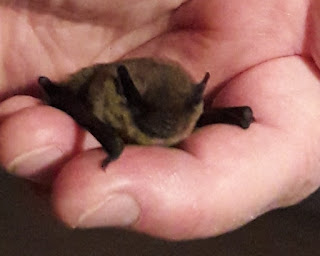 On another plus side, I have had a slow trickle of orders for my resin casts and have been busy packing them up and sending them off.

There are still a few sets of Halfling snipers and Exo Armour legs available so if you want to get hold of some, you can get them here:

As part of a slow expansion in the Emporium, I have begun sculpting body blanks for the start of a range of infantry troopers. Unfortunately, I have not got very far with them yet but have started five bodies in various poses. I plan to sculpt male and female bodies (just torso on legs) with armour and equipment which can be sent away for casting. When they come back, I will then sculpt arms/heads/weapons on to them. As part of this project, I will also be sculpting a set of weapons/helmet/equipment which will also be cast up and used to equip the bodies so that all of the kit is uniform across the range.

My plan is to tie everything together so that there are standard infantry, infantry with special weapons, heavy weapon crews (for artillery pieces) and leaders. It is early days and I am keeping the designs a bit close to my chest for now but I am hoping to have something to show off by the end of the year.

In other sculpting news, the sculpt for the Frothers charity competition has progressed a little bit and now only needs an arm and head to be sculpted. It is looking pretty good so far and I am now hoping that I can carry on the standard when I sculpt the rest (the head especially). As a result of the competition rules, I am not able to show the sculpt off... but if you are interested in the competition, here's where the finished sculpts will end up:

That's about it today.