...Everything turns up at once!

As you can see, Inso sent over a few pix to back up his comments to me yesterday. First up we have some WIP Grymn veterans for his latest army. They started life as Vanir from the Celtos fantasy range (available from Brigade Models) and are in the process of being made a bit more sci-fi. As you can see, there is still a way to go with these: 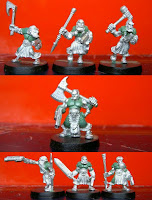 Next up is a selection of the many conversions that Inso has started for the infantry platoon for the new army. They are going to have a desert theme, hence the hats/headgear:

Next we have snipers in partial ghuillie suits. They will act as a special weapon squad in the new army:

Finally we have the two OGrymn that will finish off the green Grymn army. They have had new faces added but little more. They would have been converted further but for the lack of cutting tools. Inso has said that he may add a few wrist bands prior to painting but isn't 100% certain: 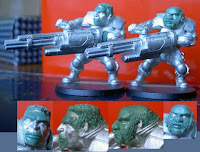 Sorry about the garish pix. Inso is still in the throws of unpacking and a biscuit box was all that he had to hand as a back drop. I'm sure that once he is more moved in, he will sort out some better pix.

It's been a while but Inso has nearly finished his move and will be back to his usual antics very soon.

He has not sent any pix but assures me that he has been busy converting miniatures during his absence and will have lots to show off once he starts taking some pix.

In the mix are:

To finish the Green army:
2 Converted OGrymn (both finished).

None of them have seen paint or been based because Inso has not had any access to his painting stuff for a couple of months...but things will change soon.