I have had a long standing issue with Orks. Not only are they completely disorganised, they have no uniformity, use ramshackle equipment that 'just works' as if by magic and they are completely beyond any form of rational control... so completely against everything else I collect.

Then of course, there are the miniatures.

Now the miniatures from GW are full of character but there is a real problem with one part of their anatomy... their butts. Now, it's not just their butts, it's how they attach to the spine. I reckon that the entire race could be wiped out just by throwing a ball above them and asking them to catch it... the sounds of spines snapping would be heard for miles around.

So... how do you deal with such an obvious flaw? You fill in the gap... here's what I mean: 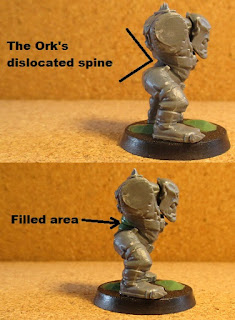 As is usually the case, I got the Green Stuff out and made the flaw go away. As a result, I decided to try it on a few other Orks I had in boxes and this is what I have come up with so far:

I reckon I still need to add a few bits and bobs but they have all had the back treatment and look better as a result. I have a few more that are on sprues or in storage boxes so there are likely to be a few more... but not many.

You may also have noticed the boss in the middle and his lack of green skin. That's because I don't like the whole green-skin thing. I don't enjoy painting it so I have decided to take a more human approach to skin tones.

I haven't built these with any goal in mind, they are just something to keep me entertained while I am not sleeping very well... if I mess them up, they aren't part of a big project so I don't have to worry about them. It is also means that I can get on with something while I am in the throes of getting the moving prep done... which is helping to keep me marginally sane.

See you from the line!

This week has been a a complete write off due to a complete lack of sleep so there won't be any hobby content today because there hasn't been any hobby going on at home for me.

So... when I am tired I plonk down at the computer and browse the interweb and this week a few Hasslefree related things happened.

First, is the Kickstarter.

Lots of fantasy stuff and different versions of a number of miniatures which basically equates to nude, glamour and toasty warm. Not my genre and not my taste but I thought I'd share anyway.

The thing is that, in a conversation on Facebook, it would appear that Kev has decided that he needed a 'pallette cleanser' to work on during the Kickstarter so will be trying to get these Grymn finished (or some very much like them):

Add to this news that he also mentioned that he was thinking of replacing all of the existing Grymn armour with something similar it could be the start of something great...

... assuming Kev can keep the momentum going on this idea. Only time will tell (you all know the fickle nature of muses... I've told you about it enough).

He also mentioned that he may have a way of getting the alternative Walker arms sorted out and put into production (they will have hands and weapons rather than just weapons); which will be great news for my Walker platoon that has been sat, unassembled in a box for a few years waiting for these new arms to appear.

So what better way to fire up my enthusiasm for the little chaps again? I have so many Grymn projects on the go that I could be here all day posting pictures so instead, heres just a few of the bare metal miniatures I have (mostly allocated to my New Model Army): 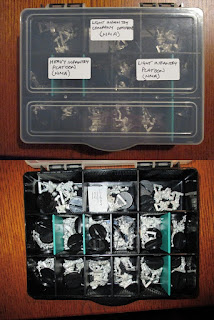 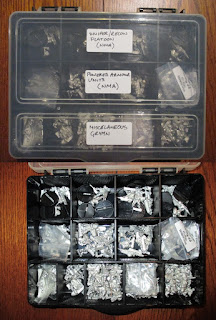 Unfortunately, with things being so up in the air at the moment, I can't really start too much because of the imminent move... but I can let my mind wander and see what it comes up with.

See you from the Grymn homeworlds!
Posted by Inso at 11:19 4 comments:

Today is the 11th September and it immediately makes me think of what happened in the US fifteen years ago; namely the terrorist attack on the twin towers, the pentagon and what followed.

At the time, I was away from home; staying in a hotel whilst I was travelling to and from a Merlin Helicopter course. During the day, details were sketchy and we had no real idea of the severity of what had happened. When we returned to the hotel in the evening of the 11th, there was a sombre atmosphere and the screens behind the bar were showing the events of the day. The first Images I saw were of the second tower coming down, followed by replays of the pair of them falling.

I was immediately struck silent before the barmaid said to me how terrible it was. My response was "we're going to war".

The events of that tragic day began a chain that has ended up where we are today in 'the war on terror'.

It is an event that should be remembered as a remembrance for those who died, those who have been traumatised as a result and the fact that from that one single act, the world changed.

Today, I read a small Facebook post from a woman who has cancer. I have been following her little posts for a long time and I think that it is very likely that the post I read, was likely to be one of her very last.

To read that she has been admitted to the hospice for the last time, had signed off her DNR (do not resucitate) form and had found time to write an emotional post reflecting on her young children, family and followers was as humbling as it was upsetting.

I wish her safe travels and my thoughts are with her and her family.

This week has been one of travels and education as well as not getting much sleep. I was having to travel into London on a daily basis to attend a Charity Management Awareness course.

It was a very interesting course which opened my eyes to a lot of aspects of charity that I hadn't really thought about... so it has definitely started my preparation for joining in with the charity sector in the new year.

The one piece of advice I would give to anyone thinking of taking on a higher level role in a charitable concern would be to do your homework first. There is a lot of responsibility and accountability in charity that people will not necessarily be aware of.

After a week like that, you can imagine that I have been pretty much useless in the evenings so I haven't really achieved much hobby but I will share what I have got so far... it is all to do with my alien Visitors: 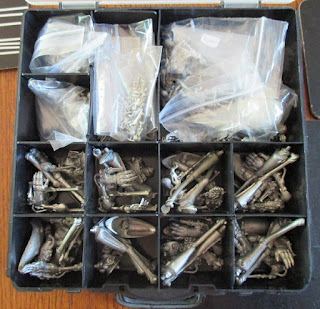 It is amazing to think that in this one little box, there are a hundred troops, eight dreadnoughts and various other spare bits and pieces. In this box, there are two more waves of Visitors (each with leader, troops and dreadnoughts), scouts and special additions.

Next we have progress on the champions and some of the MDS bases: 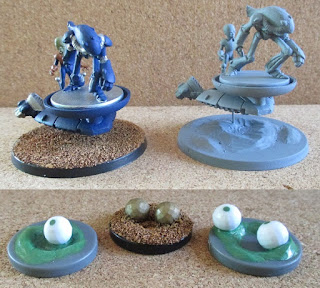 The picture shows both converted champions with one being a bit further along in the paint department, than the other. Neither are finished and both have a long way to go. The MDS bases show two that are ready for base coating and one that is finished.

I could have tried to repose the second of the champions but I like the crouched position and it would have been a tricky process... so I left him as he was.

That is that for today.

See you through the sands of time!
Posted by Inso at 11:13 No comments:

This week has been pretty quiet due to the insomnia kicking in a bit too much. Even the medication didn't help this week so it has all been a bit of a blur.

As you can imagine, I have not really been in the frame of mind for much hobby stuff and even when I was, I made a few mistakes.

I decided that, in my infinite wisdom, I would paint the base coat on my alien champion and that it would be bright green. After looking at it when it was finished, I realised I had made a big mistake and repainted it the same blue as the rest of them. I then finished the first basecoat of the rest of the colours and it was so untidy that I stopped... and haven't restarted since.

And that... was my practical hobby time this week.

In other news, I watched a charming little film called Moonrise Kingdom... it was a little bit quirky, well cast and something that really ticked all the 'arty' boxes as well. Well worth a watch:


Sam kitten has properly settled in and has been getting a bit more play value from big Fred so there have been some properly amusing fights going on.

This coming week, I will be commuting to a "charity management awareness" course on a daily basis so I doubt that I will be in much of a mind for hobby stuff in the evenings. Still... it's another course and another bit of food for thought.

Oh... I nearly forgot. Games Workshop have started putting out White Dwarf magazine on a monthly basis again and the first issue had one of these as a freebie: 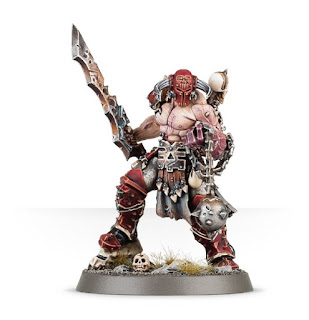 It is a Slaughter Priest and is available from HERE for the princely sum of £18!!! Seeing as White Dwarf was £5-99, I can see people buying one just for the £12 saving. I bought a copy for the sake of nostalgia and it was everything I expected it to be; a top quality, well laid out, full colour, advertising pamphlet with a few hobby articles thrown in. If GW is your thing, £5-99 for a monthly magazine of that quality and page count is not an unreasonable price. That said... most of the content can be found online in one form or another so it boils down to whether you like having a magazine or sitting in front of some form of screen.

See you through the haze!