It has been an interesting week again with lots of work in the office and not as much hobby time as I would have liked... but progress has been made on my UDoD for this year's Diorama of Doom. Since my last post, I worked on the head and nearly finished detailing the undamaged side: 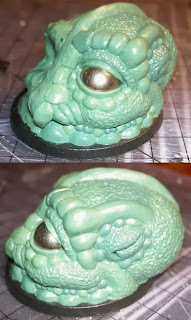 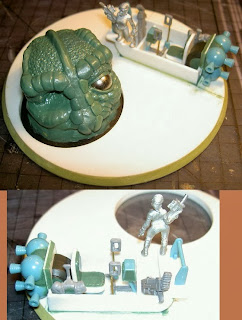 As you can see, I have edged the base, glued the boat down and filled the gaps and have got quite far with the damaged side of the head. I am likely to add an anchor rope to the front rail of the boat and a lap strap on the seat. I also plan to add a few reeds and maybe a critter to the base once the head is finished and glued down.

In other news, I am still quite sad about what happened in the Philippines and have given as much as I can to SHELTERBOX. Check out the LINK to see what they get up to and if you can, please send them some pennies. Every penny they get goes towards building the support boxes and getting them where they need to be. Every little helps and the people of the Philippines really need all the help they can get at the moment.
Posted by Inso at 16:47 4 comments:

On the outside, I don't really look like the arty-type. I dress pretty plainly I speak in a fairly pragmatic way and I have a pretty stable and professional job.

However, this can be a bit of a double edged sword.

I am sort of an arty-ninja. An arty-type in disguise. Under the pretty average surface I have a number of artistic strings to my bow and this can often catch my friends and colleagues out.

For example, I have a Twitter account where I have an alternative personality. This personality is a Velociraptor who fell asleep on the beach 74,000,000 years ago and woke up in the modern world. Obviously things are strange to him and he makes a Velociraptor judgement on certain modern topics. There are times where he looks back on his younger days of chasing prey across the plains and maybe relates it to the possible modern equivalent prey.

Occasionally, the Velociraptor visits my Facebook profile and this is where some of the confusion happens. If someone starts a message with my name or doesn't specify, they will generally get an answer from me. If they start with any mention of dinosaurs, they will get the velociraptor answering. I view this as 'performance art' and try to entertain and inform whilst generally having a bit of fun.

Not everyone sees it like that. I am a 40+ year old, professional serviceman with 25 years service and I should possibly know better than to behave in such a childish manner. Well... tell that to people like Terry Pratchett, Jacqueline Wilson, Phillip Pulman and various other authors.

Sometimes it is liberating to let your inner child out for a bit of fresh air... you should all give it a go.

So... what the heck have I been up to this week? Mostly not a lot apart from work and being too tired for anything other than surfing the web. However, I have found the time to continue with my Diorama of Doom and here is where I am at: 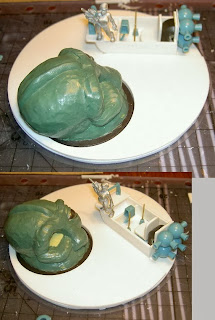 As you can see, I have added a new base and a boat. I was always going to have the head submerged in a swamp but was originally going to have the Grymn standing on it. Then I thought about how she would have got there so I changed my mind and made a little boat. It is all obviously WIP but you can see where it is going and the title of the piece will now be "I'm going to need a bigger boat" (spot the popular reference!).

Since the pic was taken I have been working on the boat and the head so they are both getting there. Once I have finished them, they will be fixed to the base and I'll work on the water (plus maybe a reed or two). Still, all progress is good progress.

EDIT - I have begun to texture the intact  side of the head now: 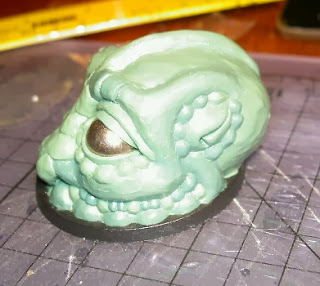 See you from the boat yard!

Today is Remembrance Sunday. My family and I  went over to the local village, as we always do (assuming I am in the country) and joined hundreds of others in remembering the fallen.

The parade was well executed, the service was as it should be and the fly past was well timed.

The list of names was read out; the names of those from the village who went away to fight for their country but failed to return.

It is a time of reflection.

This week I have been quite distracted. A lack of sleep didn't help either. As a result, I have only managed to throw a first untidy base coat on five Teratons. I also managed to sell the Halo Hornet so have added a few pennies to the Pay-Pal pot.

Over the next few months I will be selling off a lot of hobby stuff. As you know, I have been struggling with the hobby for a while now and have been looking for an excuse to 'shake things up'. Well, I have found it and I need to gather funds to achieve a very personal goal. I won't say anything about what it is but needless to say, I now have a mission so am looking through all of my stored items to find sellable stuff.

I have also decided that as a result of my new found mission, I will be getting my motorcycle sorted for sale. That will mean a little less hobby time and a little more mechanic time.

In order to raise the amount of money I need, I will also have to sculpt a bit and see if I can't sell a few of my creations.

So it will be an empowering time. It will get rid of my guilt over my motorcycle, get rid of some projects that will never be finished and also clear some space which will in-turn, remove the clutter. Not to mention the extremely large amount of positive Karma I will gain from my mission. It is win-win.

A prelude to the day after.

Like so many times before, I sit on the day before Remembrance Sunday and ponder things.

I remember the first time I went to Iraq. It was to carry out some maintenance on an aircraft so it was going to just be for a couple of weeks and then a swift return home with the rest of my small team. Although I had received some pre-deployment training, I wasn't due to go out when I did but it seemed fitting that I should go because my training was fresh in my mind.

Getting there was a case of jet power most of the way, followed by a tactical landing in a Hercules... interesting stuff when everything is blacked out. I was very glad to step onto Iraqi earth, I can tell you (I am not a particularly good flier).

The day me and my team arrived, there had been a missile strike and there was an information lock-down... three people were killed. A missile had found its way into the accommodation and they were lost whilst off duty.

It makes you very aware of the dangers. In ten days out there, my splat map was up in the hundreds... that is a count of the rockets/missiles that had landed on the base.

I saw many a brave soul and many a scared heart... and plenty of fearful eyes. Yet through it all, everyone got back up to their feet when the sirens gave the all clear and carried on. That is what we do.

Have a heart tomorrow. Go to a Remembrance service. Listen to the names of the fallen being read out. For everyone we lost, there were many left behind to grieve.

Be still the restless dead,
Who fell so far away.
Your sacrifice, remembered,
Kept us free today.

Be still the restless dead,
Who fell from azure sky,
You will be remembered,
Our gratitude won't die.

Be still the restless dead,
Who sailed across the waves,
They are in our hearts this day,
Though so many have no graves.

Be still the restless dead,
Who strove at home in war.
Your hardship kept us living.
Rest... and strive no more.

Be still the restless dead,
Who came from foreign lands,
To help us in great need,
Our freedom in your hands.

Be still the restless dead,
For you have done us proud.
We'll sing hymns of your bravery,
With joy, we'll sing them loud.

I will remember them.

See you from a humble home.
Posted by Inso at 22:29 No comments:

This week has been quiet on the hobby front apart from a couple of excellent little things happening. First of all, my box of 3 new style Vulkan battle walkers arrived and after a bit of snipping I made up a pic of the components that make up a single walker (including the extra arms): 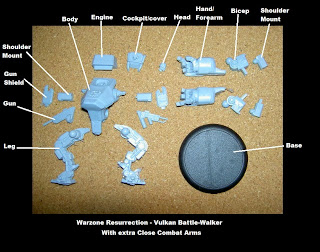 I was sent the Vulkans a little bit early (due to only wanting the walkers and not cards/troop weapons) so thanks to the guys at Prodos Games for sorting this out for me. Hopefully, this week I will have a bit of an opportunity to get some work done on them.

On the same day that the Vulkans arrived, a small parcel also turned up from Mantic Games. Inside was a team box of Dreadball Teratons and a special character called Dozer. I will not be using these for Dreadball so have only assembled the character and four players who have a wrist gun. Here is a pic with a Grymn for scale purposes: 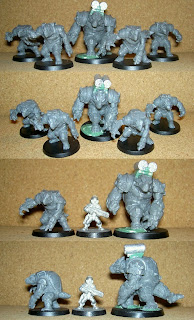 In other news, I went to a school reunion in my old home town yesterday and stayed overnight; traveling back today. I was apprehensive about going and was a bit of a 'cat on hot bricks' until My guest and I actually turned up at the venue (she was even more apprehensive than I was). However... it was for no reason because the event went swimmingly. Many a story told, many a drink shared and many a hug given. I always thought that school reunions were a terrible idea but I think that I have changed my opinion. The only downside was the fact that my favourite teacher wasn't there... in fact... no teachers were there. Maybe that was a good thing?! As a result of this weekend's frivolous activities, I am absolutely shattered. Mind you, I didn't hit my pit until gone 3AM and this old boy hasn't had the practice for that sort of thing lately so I am not surprised.

Well... that is it from a very tired Inso!

See you from the depths of the darkest of places where I can hopefully get a full night's kip!