This week has been one of all sorts of things so let's get to it.

On Tuesday, little Alfie went to get his first jabs and have a check up. He's in perfect condition and is settling in beautifully. He has adjusted to all the cats and they have adjusted to him... so we have a four cat family now.

Sam, on the otherhand, hasn't had such a good week. He got himself injured and his tail stopped working. After a few days of him disappearing and me eventually coaxing him in, I managed to get him X-rayed at the vets and he isn't too damaged after all... just bruising, swelling and a temperature... so he had an infection as well. Pain-killers, anti-inflamatories and antibiotics are working to resolve the issue and he has started to regain the use of his tail again. 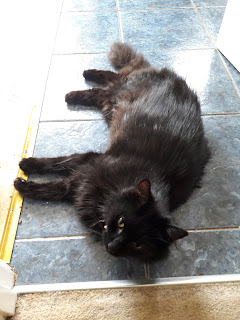 He's got to go back to the vets on Tuesday for a check up and has to be kept in... but he has resigned himself to his incarceration and it has given him a chance to enjoy the company of the kitten... and he has been socialising with Alfie very nicely.

I'd like to say that was the end of the expensive week... but then there was the fence...

Yep... we now have a glorious fence around the garden that is rock-solid and not rotten (YAY!). We are just waiting for a couple of old posts to be removed and the old fence to be disposed of and it will be a good starting block to crack on with the rest of the garden... money well spent but still 'more expense'. At least it was planned. I haven't taken any pix yet because of the rubbish in the garden. Once it is all cleared away, I'll get some pix.

This week, I have finished my care certificate, had my probation interview and also been trained as a care certificate assessor. I now have an extra "BUDDY" badge to wear at work. So I have an official qualification and have a second career (the first being aircraft, engineering technician) as a Health Care Assistant. I am rather happy about that.

As you can imagine, I have not really had the time or motivation for much hobby this week so I only have a small update that was finished last Sunday evening... and this is it:

The pic shows the last infantry elements of the Artillery Company... this is Blue Company Command. With these troops finished, I just need to sort out the vehicles and the company will be finished... well, when everything is properly based, of course.

I have started work on the second infantry platoon for Orange Infantry Company... but have only got as far as base-spraying them and adding ten pink faces. Hopefully, this coming week will provide me the time and motivation to get back to painting them again.

Who knows what this coming week will bring?

See you from the surgery!

This week has been a tiring but rewarding one.

First of all, the fence in the garden is in the process of being replaced. I am finally going to have a fence that is a nice, natural colour and is sound; not rotten. It is going well and will be finished relatively soon... it is a big tick off my list of jobs that need doing.

Work has been the usual level of awesome but tiring... and I am at a point where I have more or less finished my care certificate and should get it signed off this coming week... so I'll be off probation. In fact, I am going to be training to become an assessor so my managers seem to be pretty happy with me.

The other big news is this... meet Alfie: 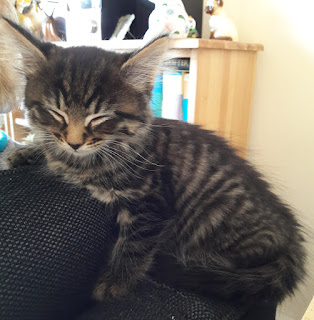 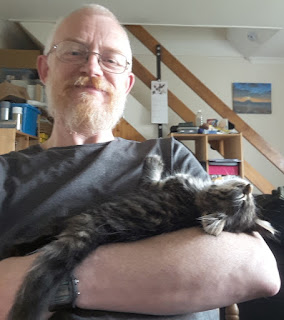 As you can see, Alfie has settled in nicely and is a rather sociable little chap. He's off to the vets on Tuesday, to get his first jabs, a check-up and sign up for kitten-club...

... on the not so happy side, our oldest cat, Fred has also been to the vets and sadly, he's not well and is on borrowed time. He is arthritic (has had medication for it for a long time) and his mobility is reducing but he has also developed some lumps in his neck that are starting to make eating a little difficult... his next visit to the vet, will likely be his last so we are monitoring things and making his last days as happy for him as we can. 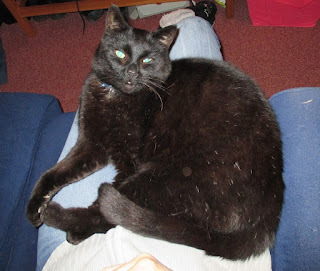 In other news... my hobby time has been limited... mostly due to tiredness BUT I have managed to get another Squad of Epic Squats finished:

This is the last section command squad for the artillery company. I am currently working on the company command units and hope that they will be finished soon. Then it will be back to infantry platoons again.

It's been a really good week, this week.

We have had family visiting for the week so I have managed to get some family time in between work shifts. They were down to visit because this week has seen the annual Flora Dance and it is a real community experience. Luckily, my missus had the week off so that she could have plenty of time for family so she had a great week.

On Flora Day, I had my first pint of ale in a whole year. It was worth waiting for... so now I am able to enjoy a pint after my year off the beer. I also spent some quality time with one of my new mates from work so that was cool.

On top of that, I have arranged to have our garden fence replaced. The tradesman who is doing it, should be starting at some time this afternoon... possibly Drektly... I guess we'll see.

From a hobby perspective, I have continued with the little Squats and have been working to complete the artillery company. I haven't quite managed it but have had a little progress: 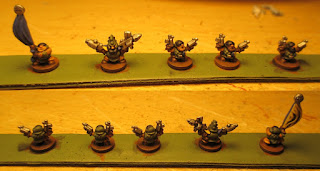 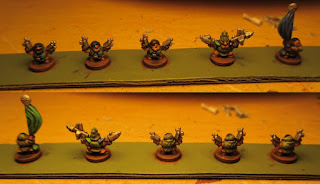 The images show the last of the three Thudd-Gun sections and two command squads for two of the sections. I still have the last of the 3 command units to finish and then the company command/support section. I have decided that the support part of this command section will include another couple of Thudd-Guns so it will be different to the Infantry company command/support section. All will become clear when things get painted and based properly.

This coming week will see the arrival of our new Kitten, Alfie. We are expecting to pick him up on Tuesday evening and we can't wait.

I think that is about it for this week.

See you from the camel's back!
Posted by Inso at 17:28 No comments: