It is a lovely, sunny day and I've just got back from a nice little trip over to Marazion, with my wife, to see the sea, have a coffee and get some fresh air.

This week has been lots of work, lots of chores and a bit of hobby so I'll get straight on with the hobby stuff.

To start with, I finished Dillon; the last member of the Predator Rescue Team: 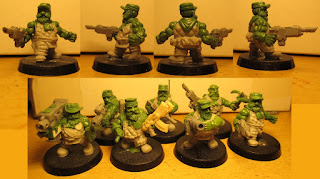 So I now have a full team:

With the team in mind, I have been looking, online, for pictures of 'the chopper' but they all seem to be overly dark and the markings on the aircraft are minimal or indistinct so it got me thinking and I have decided to add a bit of character, with a bit of a personal slant... I am going to add the decals from a 1/48th scale Merlin. Not only that, it will be a Merlin that I have worked on and have added nose art to: 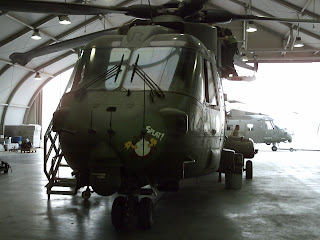 I know it isn't from the Predator but it will look nicer than dark green with black lettering and nothing else... plus it adds a personal element.

Now that the predator team has been sculpted and primed, I will attempt to paint them (at some point) but in the meantime, I have been gripped by the sculpting bug (for now) so I have dug out my shotgun veterans to finish off:

I just have the arms and a few minor details to finish so I am hoping that I can power on through and get them finished this week. In addition to these, I have also started a conversion for Colonel 'Ironhand' Straken. It is very early days yet so I don't have an image to share but hopefully, there will be pix by next Sunday.

In other hobby news, I recently received a small Ebay order... two Ratlings and four Beastmen from the GW 'Blackstone Fortress' boxed set... I have no idea what I am going to do with them but I have recently been gripped by a desire to add more Beastmen to my Squat army so watch this space.

This week has been very similar to last week but a bit more challenging at work. I've had a couple of days where things have been particularly heavy and at times, I have had to defend myself and my colleague against physical harm... so it has been an interesting week.

Work is still extremely rewarding and worth all the highs and lows so I'm enjoying it immensely (even with the challenges)... dementia care isn't always straight forward.

In other news, I have been continuing to sculpt the Predator team and have finished Mac: 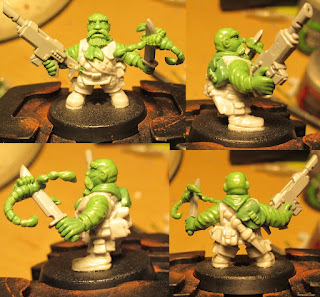 I decided that the scorpion scene should be the main inspiration and also the scene where he cuts his cheek, while shaving (hence, he has a cut on his cheek).

Dillon is next on the list and after a bit of 'on-line' chat, I have taken on board the suggestion to give Dillon big biceps... so he'll be the only member of the command squad that doesn't have sleeves. He is progressing nicely but I don't have any pics of him yet... hopefully, there will be pics of the finished team next week... and then painting will commence... OR I may continue sculpting while I am in the mood. Who knows?

See you from the disco!
Posted by Inso at 15:46 No comments:

Maybe we dodged the Armageddon?

It would appear that the Google issues have held off so far... so maybe things will continue to go relatively unscathed. Who knows?

Welcome to Inso's World again and this week has pretty much been the same as last week... plenty of work, plenty of chores and I am still running everything because my wife is still poorly.

That said, I managed to escort her to the car, yesterday and we went and sat by the sea with a coffee so that she could get some proper fresh air. It's the second time I have managed to get her out of the house in three weeks (the first was to go to the doctors).

Anyway... this week's hobby has revolved around the Predator hunting team so without further ado, here is Poncho: 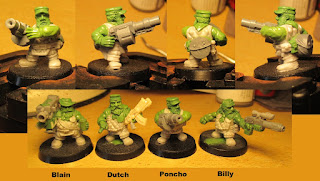 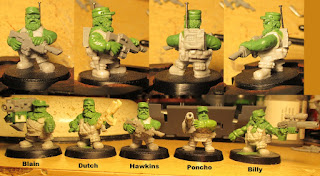 As you can see, they are not copies of the team but they do have facets of their counterparts. I have started work on Mac and he will have a scorpion to deal with.

In other hobby news, I have been struggling to stay focused because I am tired and my creative mind has been working overtime. The main distraction has been a Hydra anti-aircraft tank. I have started converting a Chimera from one of my Meng King Tigers and I have reached a point where I just can't be bothered with it any more. If I can't be bothered with one, there is no way I'll be able to carry the design over to thirteen Chimeras so I am likely to switch directions and turn it into a Hydra. I have some gun barrels and I have the rest of the King Tiger kit, all I need is the turret and I think that I may have found a solution to that with a Panther turret from a regular 1/35th kit... but NOT NOW! I need to finish my little sculpting project first.

See you from the life boat!

We're all DOOMED! DOOMED I tell you...

A very short blog post this week due to life being very hectic and not having a lot of hobby time.

To cut a long story short, my missus is still poorly, work is still heavy and having to do all the chores on top of everything has meant that my time has been all used up.

That said, I decided (for some completely random reason) to dig out an old project and get back on it... the call of the Space Dwarfs was very strong... 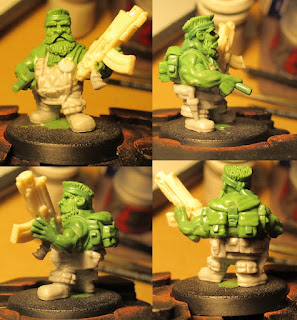 This is an almost complete conversion of 'Dutch' for my special drop troop unit... AKA the Squat Predator hunting team. This picture was taken before a pair of bracelets were added... the following pic shows him finished, with his two buddies:

These will represent various Catachan Jungle Fighter troops; namely:
That means that I have seven planned with four more to convert. Currently, I have 'Poncho' on the sculpting bench. If you are still none the wiser, this image of the rescue team from the movie 'Predator', should clear things up: 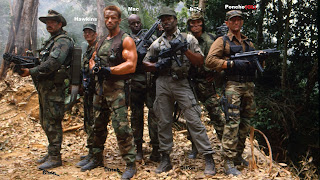 Obviously, the faces won't be likenesses of the characters... what with them having beards and being Squats... but I hope to capture a small amount of the essence of the characters of each one.

I have NO PLANS to sculpt the Predator... it would be a distraction, when I could be sculpting other things.

SO... in other news... my Blog(s) may be affected by Google's decision to kill off Google+ accounts. This could affect comments and images. Everything is set to start from tomorrow and will be finished by the end of March. I have no idea how my blogs will be affected but if images and comments disappear, I will be closing the blogs down...

See you from the start of the downward spiral!