It seems that Inso has had a fairly busy week. Today I got sent a host of pix and to start off, here is some progress on the 8 Grymn that were taken out of the cupboard last week:

As you can see, there is still a long way to go but they are certainly more advanced than the black undercoat they emerged from the cupboard with.

Next up is a bit of a departure from painting. In the following pic are a pair of sculpts for the Golgo Island competition (from the Frothers Unite forum) along side a Grymn for scale:

The sculpt on the left is going to end up as a super-hero Dwarf. The sculpt on the right is of Fin-Dus, hero of the poluted depths. Fin-Dus is probably finished but the Dwarf still has a long way to go. Inso has said that the Dwarf will have a face mask but will have hair sticking out of the top (a bit like Gambit from the X-Men). He is also toying with the idea of giving him a hammer...I guess we'll see whether it happens or not.

The next pic is of a gift from Inso's son. 5 plastic Daleks that were a free gift from a comic: 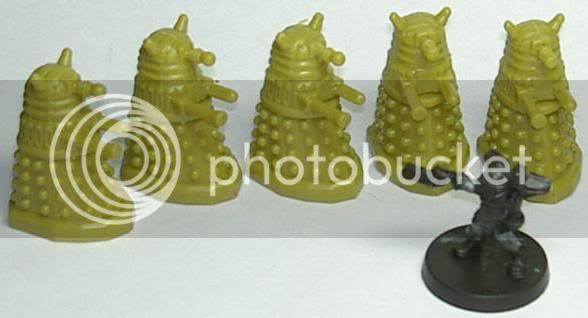 They seem to be the perfect scale for 28mm gaming. I can see Wargamers emptying the shelves of this comic, just for the Daleks. At £2-10 for the comic, that is an excellent deal for hard plastic Daleks!

Finally...'and now for something completely different'... 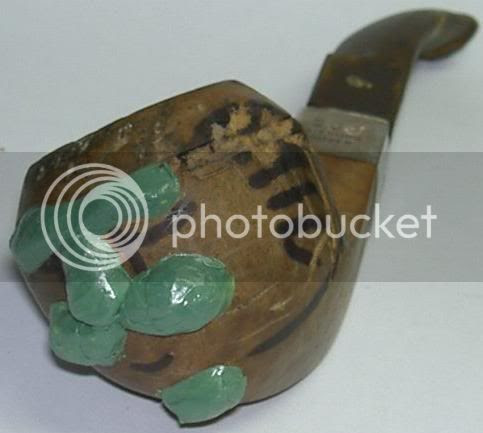 Yes, it is a pipe. Yes, it really smells like a pipe (Inso is having trouble with headaches and feeling nausious while sculpting on it). Yes, Inso has been asked to sculpt a tiger's face on it.

The reason for a tiger's face is that there are a number of flying squadrons around the world who have a tiger as part of their squadron badge. These Squadrons get together every year or so at a 'Tiger Meet' and swap stories, show off new paintschemes and generally drink a lot of beer. The guy who asked Inso to sculpt the tiger on the pipe, works on one of the tiger squadrons and wants a 'talking point' for the next Tiger Meet. Again, the sculpt is at a very early stage but due to the smell, I think this one will proceed very slowly.

Well...plenty to see this week! Hopefully, over the next few days we'll get to see some finished items...you never know!

Yesterday was a quiet day on the hobby front. The entire output consisted of two Clankers getting undercoated black.

Inso has been burning the candle at both ends lately; what with traveling, socialising and generally not getting very much sleep and it has sort of caught up with him. He is currently fidgeting about because he wants to do a spot of painting but is too tired to concentrate properly. All he has managed to do today is take 8 Grymn from his cupboard and put them on the painting table.

I'm not sure whether he'll get anything done today, especially because he has to go and call the bingo again this evening.

Well, I'd like to welcome the second follower of Inso's World; Weirdwolf. He Joins Alan from the Brandlin Grymn blog site. Some visitors may know them from The Forum of Doom among other forums.

On another blog note, you may have noticed a Nomad Painter link on the right. The Nomad blog has some really cool painted miniatures on it and they obviously have great taste because Inso's World is in their links area :).

Inso has also agreed to sculpt a miniature in a competition on Frothers Unite. He has yet to start the sculpting but he is very keen to finish something. The sculpt is going to be of...a...Superhero, Pulp style, Dwarf. Inso has set ideas of what he wants to achieve but whether he can manage it...who knows?

On the Urban front, work on the drop-ships has slowed to a crawl. Inso needs a couple of bits and pieces to finish them all off and is trying to work out what he needs exactly and how he is going to put it together. Basically, there will be a rocket pod on either side of the front wings (where the drones have been chopped off) and he knows what he wants...but getting hold of it without having to do too much scratch building, is causing a bit of trouble. He needs six identical items so that all three dropships look the same. He may end up making them from marker pens...

The evil spectre of 'Armoured Might' has reared its ugly head. The thought of having swathes of tanks supported by swathes of APCs full of troops is something that fills Inso with joy. Unfortunately, it is a distraction that constantly nags at him and stops him from progressing current projects. I can honestly say that at some point I can see him building an armoured company and I would even go as far to say that it may not even be at 28mm scale. There are some very nice 15mm sci-fi tanks out there and they may eventually chip away at his resolve...

Well...there's not much more to say apart from 'sorry that there aren't any pix today'.

Hopefully, next time, there will be something to show off.

As I sit here and type, the threat of being buzzed by a helicopter is rising by the second.

Why? It's Inso's birthday and he has been gifted a small radio-controlled helicopter (among a few other non-hobby related gifts).

So...a few beers and much helicopter-buzzing-of family is going on.

Bless him...at least he's a bit more cheerful than he has been of late. In fact, Inso has had a fairly good week so far. He went on a course on Sunday evening and bumped into a friend who he hadn't seen for seventeen years. The funny thing is, the friend turned up in the same place for the first time as well so it was a huge moment of serendipity.

Much beer and reminiscing followed and the course suddenly became much more eventful as a result.

So...what is going on in the hobby world at the moment?

Well, for some reason, Inso bought some Rackham Dwarves off a friend on-line and they are very weird. What he plans to do with them is anyone's guess but I guess the opportunity was too good to miss.

There is also another story in the mix. It is called 'drop-zone' and is an account of how the urban Grymn army works together to re-take a captured city. Not only is it a story but it also gives a bit of an insight as to why some of the troop choices have been made for the actual miniature army.

There is little more to mention apart from the fact that the weekend will see a small amount of work on a few Grymn but not much else...courses have a way of really throwing Inso off his game. You never know though, he may surprise us with a host of stuff but I don't think he has the chance until Saturday.

It would appear that after eight little urban Grymn, Inso is fed up with painting little squares. It doesn't surprise me because he said that he didn't like painting them before he even started...I'm sure there is some logic there somewhere. ANYWAY, he sent me over this pic which is of a Grymn spotter for a small sniper unit that will be part of his other little project, the Desert veteran Grymn army:

From what Inso has said, the troops in this army will have a bit of variation in both colours and kit to make a change from painting such uniformed armies in the past. There are five more in the sniper unit and they are based and undercoated ready to go...so I guess we'll see them soon (ish).

Inso is away for a few days as a result of a training course so there will be no more hobby stuff until at least Thursday, when he returns. I doubt Thursday will see much going on because it is his birthday...so his family are likely to bother him a bit.

I have been reassured that the Urban troops are still top of the agenda and that the only reason the spotter was painted was so that he didn't get embroiled in the next squad of assault troops before he went away on his course.

The First of the Drop ships is in the process of conversion too. The front wing stubs have been trimmed somewhat and are in the process of being reshaped. I have been warned that a finished product hasn't been visualised yet so it may be a while before the final design gets created...we'll have to wait and see.

On to different news. Inso has started a sculpt for a competition over at Frothers UK for a Golgo Island character. More information will be forthcoming when I get it. One thing that has been said is that it will be a Dwarf super-hero. I'll be interested to see what he comes up with.

Inso sent me these, late yesterday. They are pix of his latest finished fire-team for his Urban Grymn army. First is the new fire-team; led by a Lance Cpl:

Next is the completed assault section which is made up of two fire-teams; one led by a Cpl the other by a Lance Cpl:

If you click the pix you get a clearer view (especially the second one).

I'm not sure what is next planned for the painting table apart from the fact that it is a prize for painting these last troops. It could be a Clanker, it could be a transport, it could be a trench-coat ganger...who knows? Knowing Inso it will be something completely different...so watch this space.