Apart from Welcoming ChicoDeSatanic to Inso's World (Welcome Chico!), I don't really have any updates today.

To be honest, I started the week full of enthusiasm but that was quickly cut short when I decided that I would varnish a few miniatures. Unfortunately, the varnish I used (Humbrol matt acrylic spray) didn't like the conditions (it was a bit of a damp atmosphere) and as a result, ended up coating my lovingly painted miniatures with a frosty coating. Once I took a sharp intake of breath, I made sure everything was dry and set about repainting the areas that were worst affected.

The rectification has been completed (not perfect but acceptable) so I have lost my hobby enthusiasm for the week.

I have also stopped everything to focus on my commissions that have been lagging due to a lack of muse (obviously, I have been more enthusiastic about converting Dwarfs... rather than trying to get to grips with my commissions). That means that I have got further on them in the last day or so than I have for the last month or so.

In other news, I have now received my Velociraptor painting from Jacob and have framed it up ready for hanging at work. It is awesome and will always give me something to smile about!

Well... that is it for today. I'm sorry that I haven't got much to share but this week hasn't really been a good hobby week.

See you from inside the stage-coach!
Posted by Inso at 14:38 3 comments:

Welcome to this week's blog update. I'll start by saying hi to my two newest followers; Darcy Perry and Fred Jackson. Welcome to you both, feel free to get involved and share your thoughts.

Where do I start?

Let's start with this:

Yes, it's 'The Amazing Spider-Man 2. Me and my better half went to see it and I won't share any spoilers but here are a few observations:
It was an OK film but I was pretty disappointed to see so little of the Rhino. The door is very much open for a sequel. I'd say that it was a chick-flick with some decent action and nowhere near as good as the Avengers films.

Do you like art? Sometimes I view life as art and part of life is making altered egos. One of my altered egos is a Velociraptor and when I saw a dinosaur picture on Facebook I asked the painter to paint me a picture of a Velociraptor. It will be arriving soon... here's a preview: It's by a very talented artist called Jacob who is just five and a half years old and I think the picture is brilliant. I can't wait to hang it on my wall (I did, however, insist that he signs it first).

OK... let's talk about Miniatures. First of all, I have been busy adding decals and varnishing lately. My Powered armour platoon is finished and if you would like to see it, and the rest of the NMA (what has been finished so far), then check out this link:

You will soon see why I have put it on the Grymn blog... but that is not all. I have been ticking along with the Squat program and have managed to get a bit more sculpted... and the Dreadnought painted:

The Squat on the left is the first spotter for my sniper unit. The other two are troopers for the first squad (currently up to five models now... the Squat with the bolter is going to be part of the command squad). I think I am likely to add some decals to the dreadnought at some point but he will do for now.

In other news... my resolve is weakening for this:

It is available from Puppet's War and has been on my radar for a long time but a reduction in price has made things worse. I am likely to get one soon to see how big it is and if it is suitable, it could be used for all sorts... watch this space.

Well, that is that!

What do I mean by that?

I have completed all of my Grymn powered armour troopers for my NMA (including Torge's Tigers).

They are all decalled up and matt varnished ready to have some photos taken tomorrow evening.

My painting table will look quite bare without them but they will be leaving soon and joining the rest of the NMA.

I am very happy about this... I just thought I'd share that!

See you from the edge of darkness!
Posted by Inso at 21:56 No comments:

Decals and varnish... amongst other distractions.

Hello again, it's Sunday and that means another blog update.

But before I start, I'd like to welcome Shaun McTague as the newest follower of Inso's World. Welcome aboard and I hope you find something to inspire you... and feel free to comment on things.

In a week of ups and downs, I have manged to continue with my current project and throw a few distractions into the mix as well. Hmmm what first? I guess I should start with the latest IG to Squat conversion... 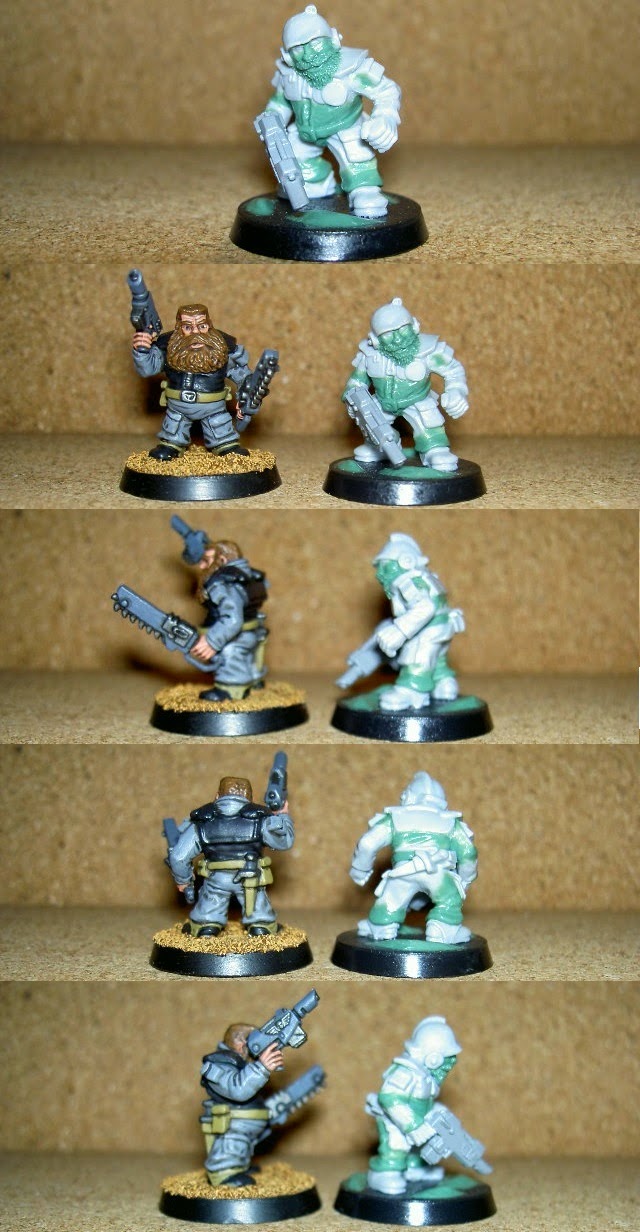 As you can see, he is armed with a las-carbine like the last one but apart from that, he's just a bit more of the same. Unfortunately, I haven't painted number three or four yet... but I did manage to find a random distraction in the form of this: 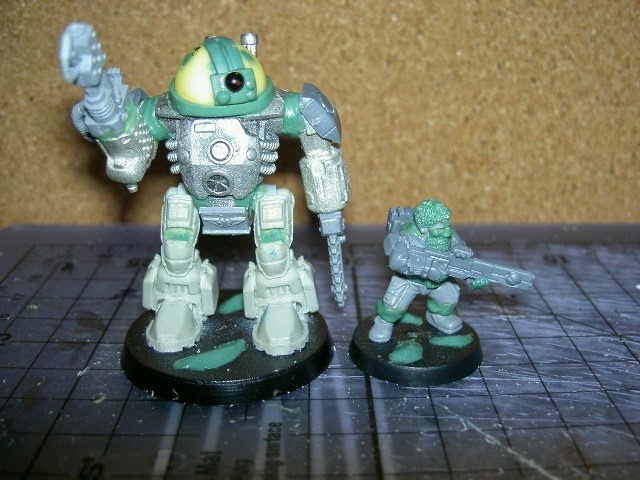 The mech on the left is going to be a dreadnought for this little Squat force and the guy on the right is a Squat made from Tau and Catachan parts. The rifle is a pulse carbine without the grenade launcher. He's a little bit taller than the otherSquats I have been making but not so tall he doesn't fit.

This week, my decals arrived from Dom's Decals and they were screaming at me to be adhered to my Powered Armoured Grymn... so that's what I spent four hours of today doing! Yes... 4 hours! 84 tiny little decals are now attached to my Powered Armour platoon and have been varnished over. I haven't taken any pix yet because the troops are still gloss but once I have matt varnished them all, I will show them off. I am glad that the little task is done... I don't have a lot of patience for decals.

Do you remember these?: 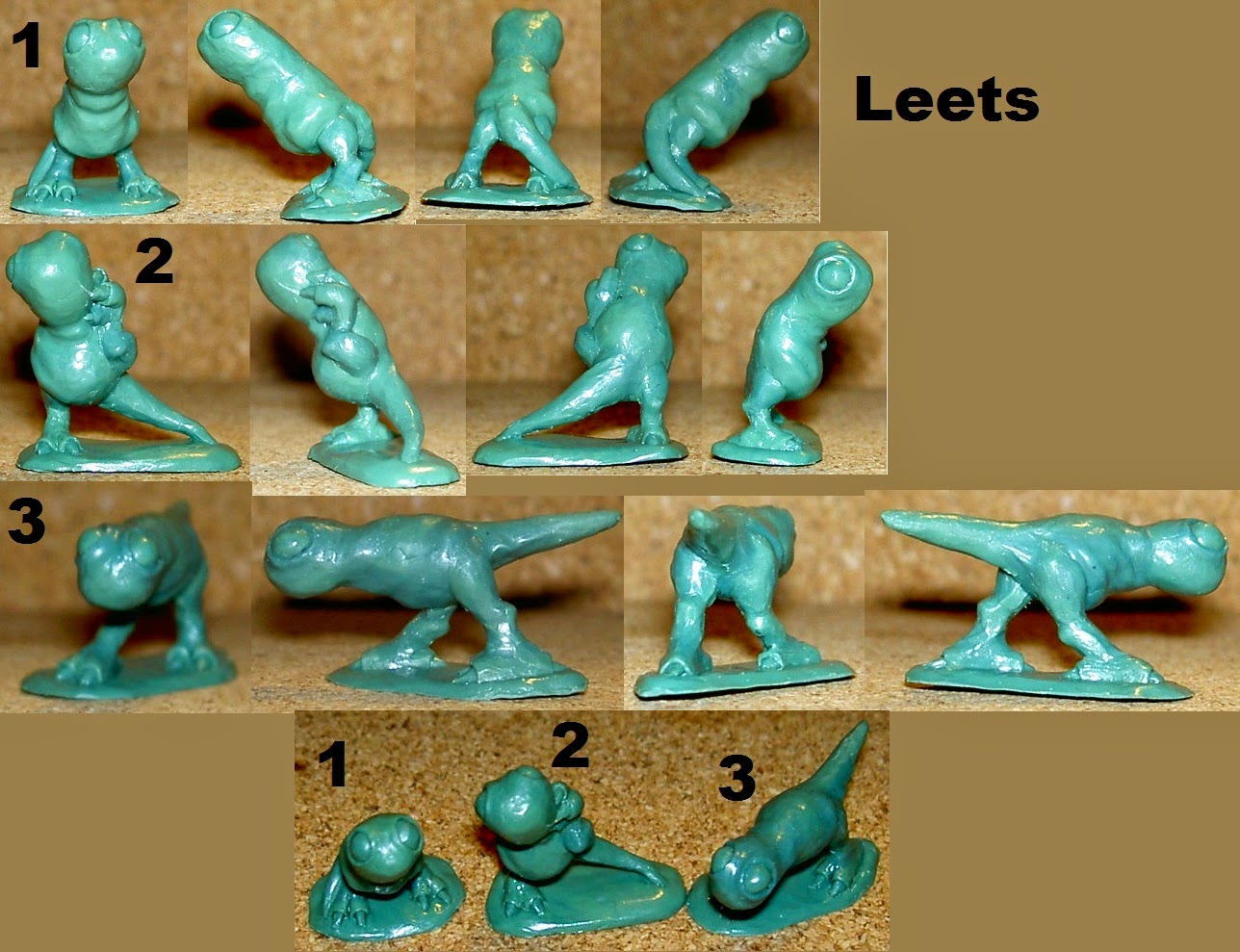 Well, they are now available to buy as a part of a pack of Leets from HERE. It is always nice when your own work gets put into a shop.

See you from the end of the space-time shift!
Posted by Inso at 19:48 No comments:

It's Sunday again and the follower count is slowly approaching 200 with the arrival of Steve63 and Ironworker in Inso's World. Welcome aboard and I hope you find something of interest as you stroll along the twisting paths here.

So... this week saw a 'how to' on Tuesday. That has since moved on and the subject of the how to has been base-coated and washed but not finished. In the meantime, I have been converting Squat number 3... here he is: 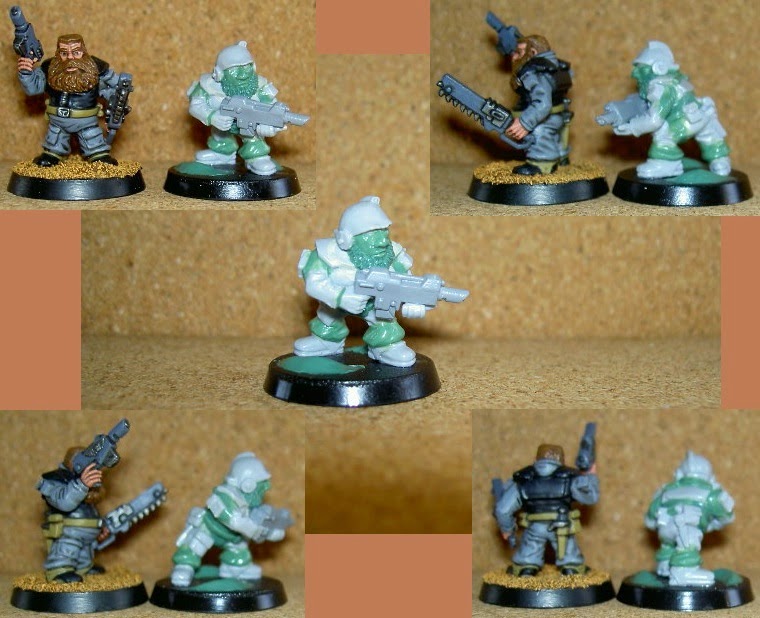 As you can see, he is the first of the 'bent leg' troopers and I have decided to use the IG helmet as well. He was given a chin-beard and not a full beard just for a bit of variety. The las-carbine is a trimmed down Catachan weapon and will likely be the standard weapon for the troopers. I think that it is a perfect size and it was very simple to convert... so is easily repeatable. One thing I noticed about the donor body was that it was less detailed around the shoulders so needed a bit of extra work. I also had to chop off the bent leg at the groin and shorten it slightly so that the knee joint looked right. Not too much of a problem but additional work.

The next one will be the other 'bent leg' pose and will also have a helmet on... so watch this space for that.

In other hobby news:
In other, other news...

I have passed on my motorcycle to a new owner who will give it the TLC and maintenance that it needs to get back on the road. It wll be getting a new rider... a newly qualified, lady biker who will, I am sure, love riding my reliable little steed... sorry... HER reliable little steed. I am just glad my lovely little bike has gone to a great home: 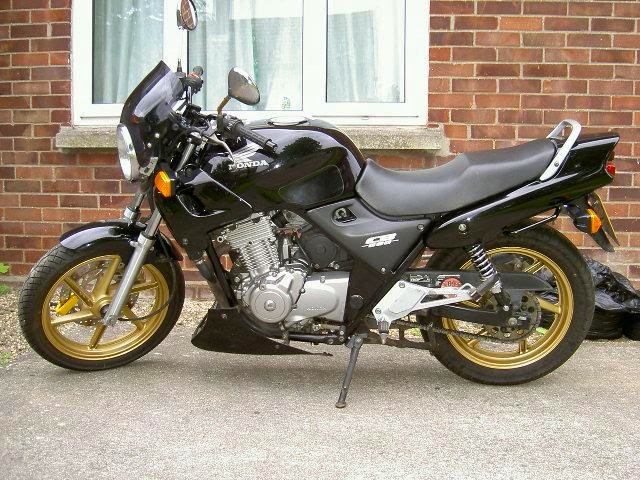 Parting with my bike was the reason I bought some Tau... comfort shopping.

I have also baked a cake today (three layers of a sponge cake) that I will be finishing off later so that I can take it into work (I should have sorted a cake out ages ago but I haven't... so I have made the extra effort and made one myself).

I've just watched the Amazing Spiderman film with Lizard in. It was good. Much better than previous Spiderman films... now I can look forward to the next one. It should be fun.

Back this KICKSTARTER!... I want some mechs.

Hello. I know it's only Tuesday but I was asked by someone on Facebook to put together a guide for making my Squats from the old plastic Imperial Guard sprues... well here it is: 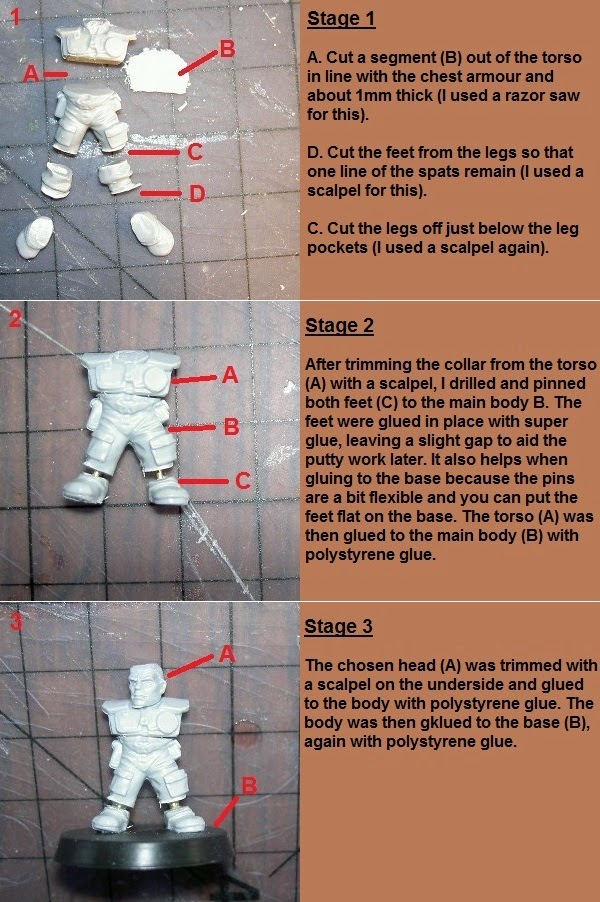 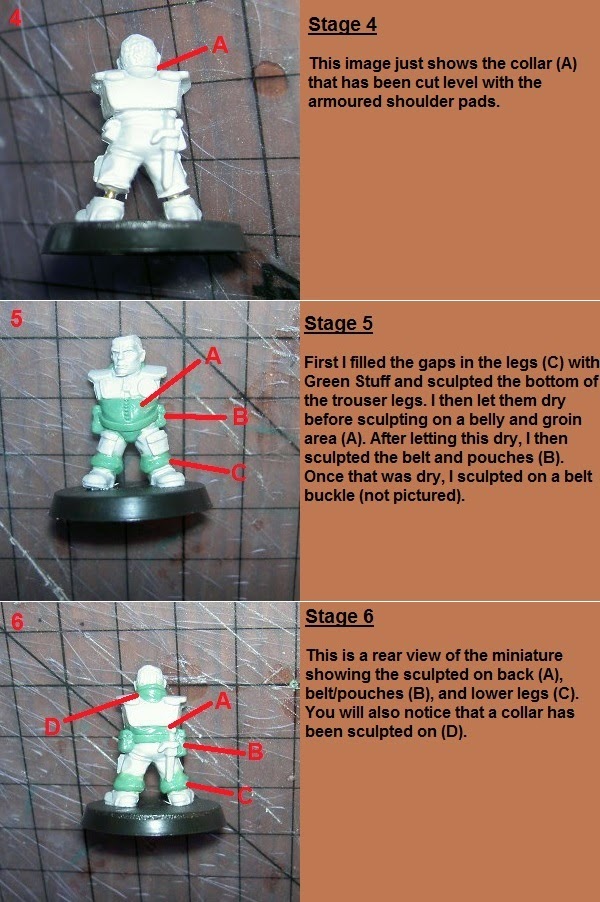 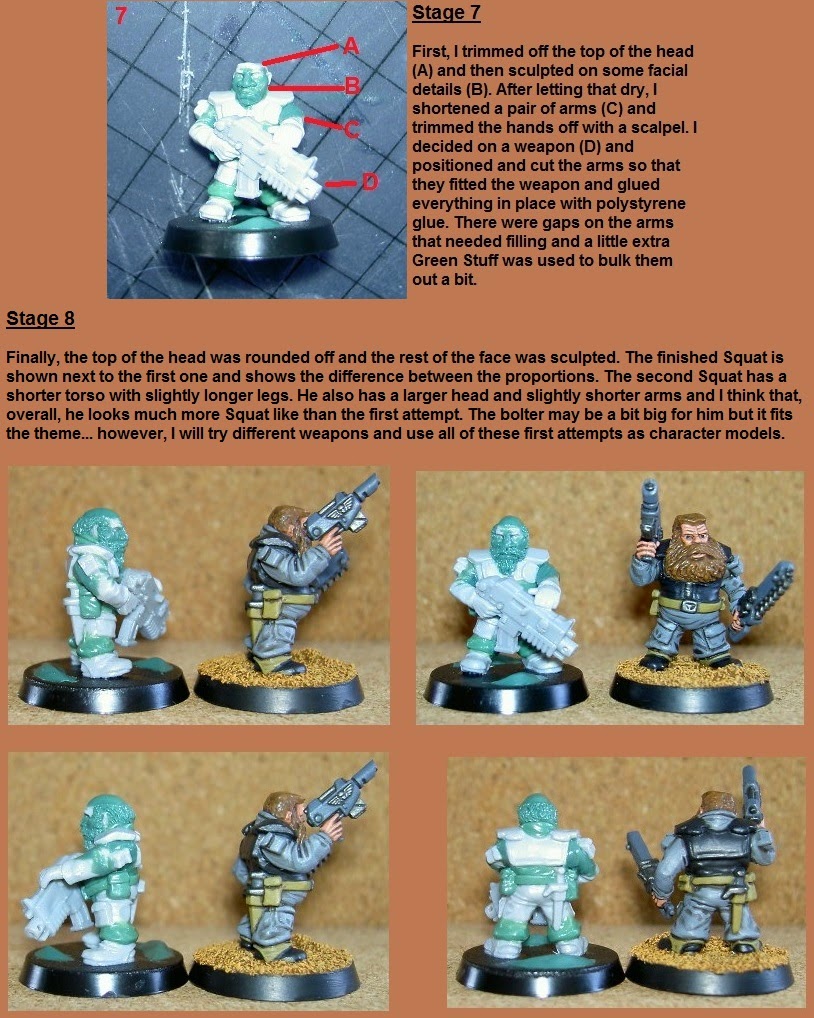 So there you have it. If you have any questions please feel free to leave a comment.

I have started painting this one and have cleaned up the next donor so there should be more to see soon.