Oops, I did it again.

Hello and welcome to a rather tardy Inso's World.

Not to put too fine a point on it, I have had a nagging virus that has kicked the arse out of any motivation that I may have had... so I have been doing rather a lot of not very much at all.

That said... I have done a few things over the last couple of weeks.

The house painting (external) is now finished apart from a nasty mark where the boiler vented down my newly painted wall. I have since added a hose to take the draining, dirty water away from my nice white walls and will dab a bit of paint on at a later date to cover the mess. The tree stumps are more or less gone from the garden, thanks to a friend who turned up with a trusty chainsaw. I also managed to empty the shed a bit, by sorting out some recycling of old electronics/metals and wood and getting it to the recycling center.

Since the last blog update, I have also been out and about with my wife to see numerous local bands and we also went up to Chard in Somerset to attend an '80s/'90s School Disco/Reunion this weekend just gone and stayed at a lovely little hotel overnight before returning home. The disco was a charity event, arranged by a friend of mine and was brilliant. We both had an immense time... I even met up with a couple of people I hadn't seen for over 25 years!

On a hobby note, I have ordered some alternative decals from EBay because I have lost hope in getting the ones I previously ordered. I have sculpted the tank commander in the third tank: 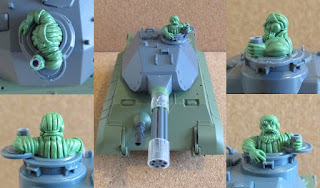 The tank has now been fully base-coated and washed, ready for the stippling process to begin. I haven't painted the commander yet because I need to get the tank sorted first. Here's where it is at so far: 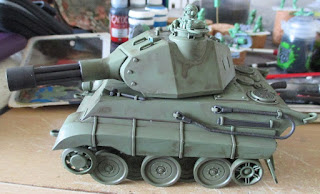 With tanks in mind, I have been collecting various pens in order to build the primary weapons for the remaining members of the tank company. There will be three battle cannons, three plasma cannons and an executioner battle cannon (for the overall company command tank). I think that I have covered all the bases and have the option of buying more, should I mess things up... which could be handy because as well as arming tanks, I may need to find some alternative weapons for this: 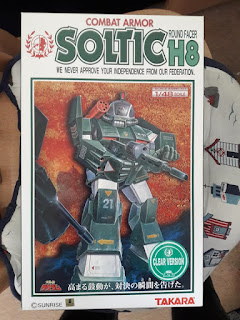 It is a 1/48 scale kit that assembles to be around 8" tall (if assembled in accordance with the instructions). It was an opportunity I couldn't miss because it was only £19 including postage... so a complete bargain! Obviously, it will be joining my Squat army as a proxy Knight Titan so will be getting a little bit of work done on it to give it a bit more of a Squat feel. No... I will not be giving it a beard and axe... it will be getting a more earthy look than a giant Dwarf. That said, I won't be doing very much with it for the time being because the tanks are my priority.

So... commissions. Well... I have tried to get some sculpting done on the commissions and have managed to bulk out a Goblin and tinker with a second one... but that is about it. I am desperately hoping that my sculpting muse comes home soon because I hate not being able to progress other people's sculpts. My tank commander is not up to my usual standard and I certainly wouldn't want to fob off a client with work that wasn't the best I could do... so it's just a waiting game at the moment.

On the plus side, my teetotalism has greatly improved my mood and I feel much more positive than I did before. Hopefully, once I shift this bloody virus, that positive mood will turn into motivation and I'll be able to get more stuff done.

It's funny that I don't miss the drink at all... although I did feel a bit self conscious at the disco 'making shapes'...

Well... that's about it for this update. I don't know when the next one will be but it should be soon.

See you from the conga line!

Hello and welcome to Inso's world, after what has been a very eventful week.

To cut to the chase, Hobby time hasn't really been the main focus of my week because I have had family visiting and have been enjoying having them around. 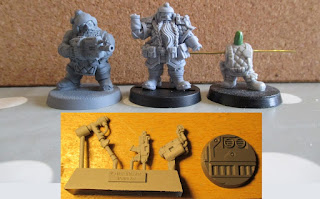 As you can see from my image, he is big... he's even bigger than a Kharadron. Although I am not too bothered about his height, his tiny hands and pin-head bother me... so I will be sorting those problems out. I have started on the head: 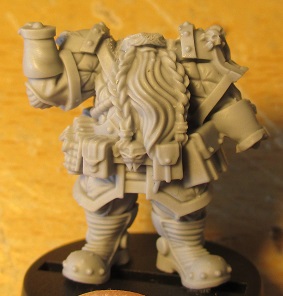 As you can see, the head has mostly gone but I will be using what's left and blending it in with a larger head (wearing a beret). The hands won't be a problem and I will be able to sort those out with a bit of green stuff. Am I disappointed? No. I knew what to expect and I never had any specific spot to place the miniature but I reckon that after a bit of tinkering, he'll fit in with my 'Big Squats' and they'll all become a bit of a Necromunda gang.

In other hobby news, I have started on tank number three and it is currently at this point: 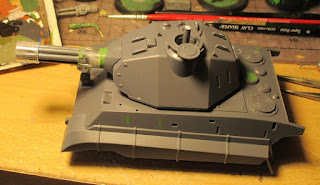 As you can see, basic conversion is finished but I need to sculpt a tank commander on the piece of sprue that is sticking out of the cupola. I will be able to get a certain amount of painting and assembly done in the meantime but it won't be too much until I knuckle down and get the commander finished.

With this tank being firmly WIP now, I have ordered the next section of three tanks and they should be arriving this coming week.

As for other hobby news... I'll be saving that for next week.

Life news now... and this week has been filled with it. I have got a head cold and have had a bit of insomnia but on the whole, life is good. My mother and father in-law have been visiting this week and my wife has had some time off work so we have spent a lot of time together. Meals out, trips to places and the odd cuppa here and there has meant for a very nice, sociable, week. Flora Day was this week and the Furry Dance hit the town. I was mostly solo for the day and spent it doing what any sane man would do... I went to my local pub and stayed there all day... only venturing out to watch the dances. On the day, there are adult dances at 07:00hrs, 12:00hrs and 17:00hrs, with a children's dance at 10:00hrs and the Hal-An-Tow starting at 08:30hrs... so there is plenty of time in between, to enjoy a drink or two. Here's the difference between the 07:00hrs dance and the 17:00hrs dance. First, the 07:00hrs dance:


As you can see, the day's merriment has hit home by the evening dance.

With Flora day, a meal out on Friday evening and a live band on Saturday evening at my local, this week has been a properly social affair and I have thoroughly enjoyed meeting many people (including one who I hadn't seen for a good 15 years!) and getting to know some new faces.

Prior to Flora Day I came to the conclusion that I needed to kick-start my life again. I have been getting a bit down in the dumps and have let things slide too much... so the first thing that has to go is booze. As a result, I am teetotal until the evening before Flora Day 2019 (yes, that's a year). In addition to this, I am returning to my usual healthy diet and am beginning to get a bit more exercise in. I am hoping that these three things will invigorate me a little and get me back to my usual jovial and productive self. Only time will tell on that one but if nothing else, I will lose some weight and hopefully feel a bit healthier in body.

It should also mean that once I start increasing my exercise, I will be able to focus on my charity run again... something that has fallen by the wayside a bit and has been playing on my mind.

See you from the epiphany tree!

Three wheels on my wagon.

Hello and welcome to Inso's World this week.

This week has been quiet. A trip out on the bike... A few chores... another couple of great nights, watching live bands... watching Avengers Infinity War at the cinema... and having a day of grieving because these week would have seen my Dad's 75th birthday, if he wasn't beaten by cancer last year.

This coming week is one of the biggest in my town's annual calendar because on Tuesday it is Flora Day! This year, I am going rogue and striking out on my own for the day... but we have family visiting and I will be spending quite a lot of time with them, over the week so I reckon this coming week will be pretty excellent.

From a hobby perspective, I have achieved very little sculpting because, quite frankly, I have a bogging head cold at the moment so I am not in the mood for very much... apart from this: 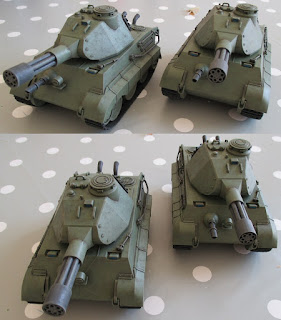 Yes, I now have twp of the Tiger-Russ tanks painted up and have started the process again on the third one, by giving the sprues a good wash in detergent; ready for work to begin properly. While I am waiting for that to get going, I thought I'd share a picture of my armoury so far: 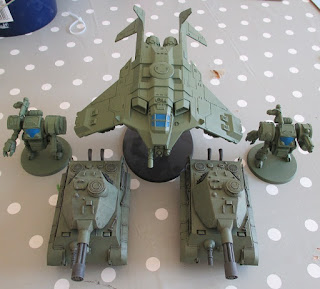 The spray primer that I got from Warlord Games is doing a grand job of making things smooth and green.

Incidentally, the third tank will be getting a tank commander. He won't represent one in the rules, he'll just be there to show that his tank is the lead tank.