After last week's post, I have stuck to my guns and have not added anything new to my army list. In fact, after receiving my Ogryn miniatures from Mad Robot Miniatures (in the USA), I decided to just have three Ogryn for now because it would take quite a lot of conversion work to change the second set of three into individuals, rather than a repetition of the first three.

With the Ogryn in mind, I unpacked them and quickly decided that they needed widening and their heads being lower down. As they are, they look like large scale humans and I wanted them to be a bit more Ogre like... not too much... but a bit... so I added a small disk of plastic in between the arm/shoulder and filled in the area to make a tidy join. I also trimmed the neck away from the heads and then pinned them in place before filling in the gaps again. This resulted in a nice little unit of three Ogryn: 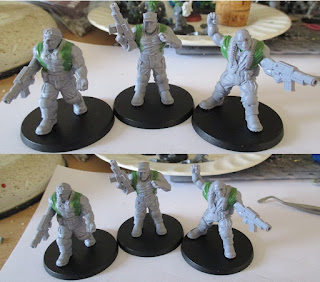 I am really happy with the way two of them turned out but the third one (on the right) will do a trip for now. Since this image has been taken, I have primed them and put them in the painting box, ready for when I get the brushes out again. In the meantime, I have been adding to my second competition sculpt and have added the pouches to his belt and have started to build up his infantry weapon and arms. I am hopeful that I will be able to finish him fairly soon.

As for the army, I have got the Beastman sat in exactly the same state as his last picture and have the command squad and commander for the final platoon, sat on my desk. While looking at this little unit, I noticed that two of the command squad troopers are finished so I only need to add the arms to three miniatures... winner!

As a side note, it is nice to be able to tick things off a list as you complete them... I have a lot more green and a lot less amber on my list now... not long before the troops are done, I reckon.

See you from the happy chair!
Posted by Inso at 12:15 No comments:

It isn't Sunday and it is very early so that must mean that my brain is itching and I need to scratch it... and today, the itch is all about the Squat army that I am building... and over-reach. 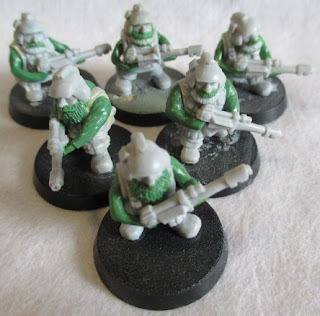 In the beginning, I just wanted to get a few of the old, 1980s, plastic Squat miniatures so that I could build a small patrol army. At the start, I thought about having 2 platoons of troops, a command element and a support element... nice and simple. Over a couple of years, I got onto EBay and managed to end up with nearly 200 plastic Squats... many more than was required for the small army... but I thought "better too many than not enough".

Assembly started and I quickly discovered that I really hated the plastic arms so I decided that all the arms would be sculpted (apart from the odd one or two)... so I bit the bullet and went for it.

I started with 31 troops.... the basic platoon; which consisted of this:

Then I built a second one and an army command unit. All was going well... then NEW THINGS HAPPENED!!!

Mantic released new Steel Warriors for their Forge Father range, Prodos released some new Vulkan Battlesuits for their Warzone Resurrection range, I found some new 'chibi' tanks from Meng that were perfect for my needs, GW released Ambots and Kastelan Robots, I found some cool Mecha kits that might make a good basis for titans... the list goes on... and I got swept up in it.

Pretty soon, I had two factions in the army; a Space Marine faction (uper echelon leaders and hearthguards) and an Astra Militarum faction (the basic troops and armour)... and things were being added regularly... maybe even a Mechanicus faction...

Enough was enough! I needed to grip it. That said, not by very much because over the 4+ years that I have been working on the army, I have got a lot of conversions finished... and I discovered that (apart from tanks/APCs) I don't have too much to finish converting BUT I have some road blocks that I was struggling to overcome. Time to trim.

Looking at my big list of things to finish, I had one complete platoon to convert, a squad of Ogryn, a scout squad, a terminator squad and a bike squad...

The platoons have expanded from the initial idea and now consist of:

There is a problem because Prodos have stopped making Warzone Resurrection miniatures and I was using the Vulkans to convert into Sentinels. This started the seed of doubt and my mojo decided to walk away... taking with it , the will to convert the Space Marine elements that still needed to be finished. I started work on the Primaris Psyker and stalled so I did the decent thing and chopped a few bits and bobs from my army list... turning the Space Marine Battalion into a Vanguard Detachment and losing a couple of mandatory elements... that meant that I only needed to convert a single terminator Sgt and a single scout bike Sgt to finish off the Space Marine element of the army... so this happened: 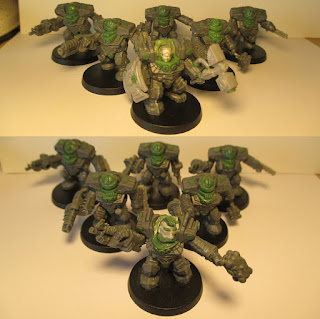 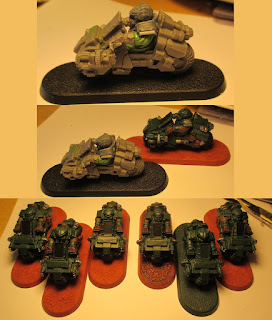 In doing this, I have a finished detachment but also have the option of adding the chopped units at a later date if I want to because I have the miniatures set aside, ready for conversion.

Now, from a troops perspective, I just need to convert the platoon, which is already well started... just the arms need to be finished on most of them and six Ogryn, which haven't arrived from the USA yet. I have also finished the Ratling Snipers but will need to decide what route to take with the missing Sentinels... it may mean converting up some Hellhound tanks instead.

Once converted, I have two options... start on the tanks/APCs or start painting...

So... what have I converted so far? Lots!

Astra Militarum:
Space Marine:
Looking at the completed elements, a single platoon with six Ogryn doesn't seem very much, does it?...

... well... not until you think about the 14 Chimera APCs and the Hydra anti-aircraft tank... and the possible Hellhounds...

Oh the first world problems of the hobbyist! Cheers! 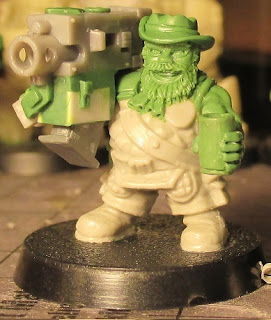 See you from central command!
Posted by Inso at 08:31 5 comments:

Back to the Army.

This week has been a beautiful, challenging, tiring and rewarding week.

Work has been really good. I have worked with some proper team players and have had a very positive week... even though the temperatures within the care home have been like a sauna and I have faced some challenging behaviour from some of the residents. The good thing about the challenging behaviour is that it isn't the resident's fault, it is their dementia so I can blame the disease and not the person which means I never feel the need to get upset with anyone.

I can safely say that this week has really confirmed the fact that I love my job.

In other news, the garden is now cleared and has been mowed and actually looks like a garden again... which is nice. As well as sorting the garden out, I also managed to get a trip out on my bike during the week and yesterday, I drove up to Aylesbury to see my in-laws. It was a lovely visit and although short, was very much worth the long drive.

Alfie has properly settled in and has been well and truly adopted by Sam. It is ever so cool, watching Sam protecting little Alfie when he goes out into the garden. It's like he's got a little brother that needs keeping an eye on. Yep... Alfie is properly settled: 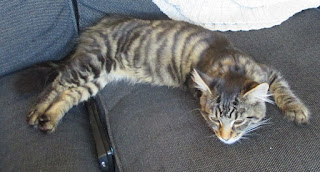 Now for some hobby news and I have had a distraction again. I have stalled on my Electropriests because I got fed up staring at an older project on the work bench. After a bit of effort, I finished off the third of the three veteran units for my Dwarf Army: 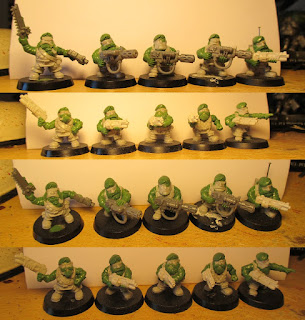 This unit will join two others and Colonel Straken to form a Vanguard Detachment. The same detachment will also include some Ogryn but they haven't arrived yet. After all my indecision, I finally decided to get some Ogryn from Mad Robot miniatures in the USA. As a result, I have six of THESE (with guns) on the way. When they arrive, they will climb to the top of the conversion list so that I can finish off this detachment fully... and also see how the miniatures assemble and maybe write a short review.

Now that the veterans are finished, I decided to start work on something else from the army. After trying to clean up some legs for my Hearthguard and losing the will to live, I decided to keep things simple and start small so I dug out a Tau Firewarrior body and started work to convert it into a Beastman Psyker for the third infantry platoon. Here's where it's got to, at the moment: 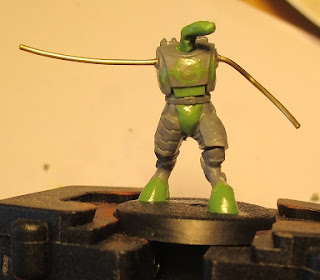 It is very early days but hopefully, I can make a bit of progress over this week.

See you from the production line!

This week has been very similar to previous ones but with the addition of a head-cold... so things haven't gone as smoothly as they could.

I'm keeping this post short because I have work in an hour or so... so I'll get straight onto hobby stuff.

As I mentioned last week, I bought a box of "Avatars of War - Dwarf Seekers" and this week, I have been playing around with them to see what I can do. The idea behind getting them was to create a unit that will proxy for Electropriests (the ones with the gauntlets). I didn't want them to have the same style as the GW, human versions so I thought hammers were the way to go... and a more barbaric, 'forge' styled route was appropriate for my little army. Anvil Industry make some lovely little back-packs so I bought enough for the whole box of Seekers and have put together a couple of test models. 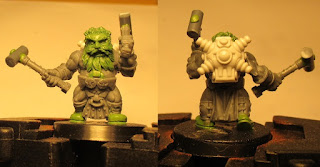 I think that the simple approach is the way to go so I have left off any hoses or pipes at the moment, so I can see if I am happy with the clean look. If I don't get the right vibe from them, I'll possibly add more details later... maybe in the painting phase, if in no other way. This is the first unit of five, as it stands at the moment: 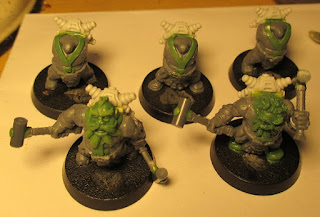 Well... short but sweet, this week.

See you from the naughty chair!