Well, it is Sunday again and after a week of upheaval, things seem to have sorted themselves out a little. To top things off, Inso has sent me these two pix to get the machine back into gear (so to speak). First up is the final member of the Grymn Desert Veteran Sniper Squad:

Followed by a pic of the squad together:

As a reminder, you'll need to click the pix to get better views.

As I mentioned in an earlier post, Inso is planning on improving his photography by means of a light tent and the correct amount of lighting. Even though this is a plan for the coming weeks, it will not prevent him sending me pix...even if they aren't as good as they could be.

All the pix are now back!

Some may appear blurry but that is down to re-sizing them. If you click on any of the pix you will get better ones, with a sharper image and usually a bit bigger size.

Inso hasn't done any hobby work for the last day or so and today he went and did something completely different. He went to a his friend's, child's birthday party and spent 3 hours painting faces! By the end of the party there were quite a few tigers, a couple of skull faces, a werewolf and enough little butterflies to fill up a collector's display case. Inso said it was good fun but his legs were killing him by the end as he had to lean forward in his chair all the time and concentrate on what he was doing.

I'm not sure what is on the hobby-cards for the foreseeable future but if I know Inso, I'm sure the pix will be turning up thick and fast, any time soon.

Catch you later and remember...

I'm sure that everyone who has visited Inso's World over the last day or so have noticed all the signs about moved photos.

There are two things to note on this process.

1. It is taking a little time. I have done 3 months so far and have 11 to go!
2. The pics that are on view are not the best quality. That means that in order to see the pix in their proper glory, you'll need to click on them.

I can see what Inso is trying to do and it would appear that the buzz word is CONSOLIDATION. He wants to set his court in order before he continues much further, that way things will be easy to navigate through, on his on-line album. Inso has been telling me about doing this update for a while now and I guess he just decided that now was the time.

With pictures in mind, Inso is also in the process of sorting out a light tent for his miniature photography. He has said that he is likely to buy one rather than build one so that it folds flat and does the job without too much extra effort. Hopefully his picture quality will improve and be more 'standardised' than it has been...we'll see.

Well...remember to click on the pix to get a better view and I'll catch you later!
Posted by Inso at 16:46 No comments:

Inso has just let me know that the pix on the blog will be disappearing for a short while due to him sorting out his on-line photo album.

The plan is to re-arrange everything into their own separate albums, rename some pix and take a few new ones.

This will take time but rest assured, things will be back to normal very soon.

Is it Tuesday already?

Inso has returned from his trip to see family and apart from being completely tired out...he is relatively up-beat about things. He sent me a pic of his latest sniper today and has mentioned that the final one is already on the painting table. So...here is the latest sniper: 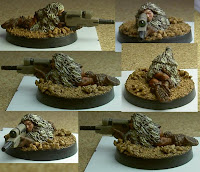 I'm sure that the picture could have been better but Inso has recently changed his painting lamp and is still getting used to how it affects his photography.

The tank is still plodding along and there is a little more paint on the leader of the Space Rangers but I think that Inso will be finishing his sniper squad before much more progress elsewhere.

Inso has really been busy over the last couple of days...here's another Grymn sniper: 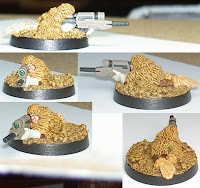 Now there are only two more left to finish the squad.

I doubt if much will get done tomorrow as Inso is going away for a few days to visit family.

Apparently, Inso didn't go to bed last night so he decided to paint another member of the sniper squad: 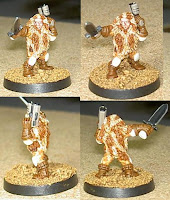 The picture isn't the best but I suppose he was tired.

It's Monday and Inso has changed direction again...and sent me this picture: 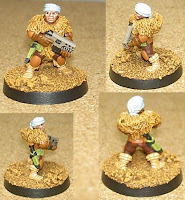 It is the second spotter from his Desert Veteran sniper squad. It was one of those spur of the moment things.

Who knows what will be next?

I know that he has been working on his tank today but he said that it wasn't in a condition for pix due to it being slightly dis-assembled (the side-skirts, tracks and a few wheels have been removed to gain access to areas that needed gaps filling).

Look out for more updates!

To continue the haphazard approach that Inso has to his hobby, he sent me this picture of some Space Rangers from Em4 miniatures:

They are plastic, single pose miniatures that come 5 to a pack at £2-50 a pack...so not bad at all for 50p a piece. I think he has started to paint these blue to escape from all the camouflage he has been painting lately.

Next up is more progress on the Big Tank project:

As far as Inso is concerned, he is going through the gap filling phase at the moment and fleshing out various areas. During this process, he has built up the turret a little, added a little detail to the main gun, added a bit more thickness to the side skirts (so the tracks look more at home) and added further shape to the rear of the tank and the track guards.

One thing Inso has mentioned is that there is a further layer of plastic to go over the entire tank, so the roughness of the edges will not stay.

There is still a lot of work to do but Inso has a few days off work and with all the snow, it looks like he may stay in for long enough to progress things.

I have been sent a small update on the big tank project. Inso has been starting to add a bit of shape to the turret:

The middle of the turret will be higher than it is at the moment but not very much.

Now with the start of a turret...

Inso seems to be on a bit of a roll with this one...

Well, it looks like it may have been a slow week for painting this week, as the Grymn have only gained their base coat on their armour. At least is will mean the start of the camouflage when Inso next picks up his brush:

Do you know when there are times you have an idea and it festers away until you just have to do something about it? Well it seems that Inso has had one of those times. The other week he was talking about big future tanks with heavy armour, big guns and a reasonable troop carrying capacity...well it seems that he couldn't put up with it any more so he went and bought a 1/35th scale 'Flakpanzer Gepard', some extra plasticard and a new tube of polystyrene cement and set to work. The following pic is very WIP at the moment but...you get the idea:

The next pic shows just how big it is going to be:

The lump on the front is where the troops disembark and either side will be a small turret for close support. Just above each turret, on the slope, will be a driver's position (one either side). The main turret will be quite broad but very flat. There will be three main guns and a pair of 'all round defense' guns on the sides.

According to Inso, the whole thing will have an electric power plant (using advanced crystal energy) to not only drive the vehicle but power the weapons as well. The three main guns will charge up, fire and then have to recharge. The idea is that while one is firing, the other two are recharging so there will always be a gun ready to fire. In an emergency (or as part of a main battery) all three guns can fire at once causing an awesome amount of damage but will then have to spend time charging, leaving the tank vulnerable. Having everything electric negates the need to carry ammunition.

If you look at the top picture, there is a line going across the tank, just in front of the turret. In front of the line is the transport area, behind is the turret and either side, the powerplant/engines.

Well...yet another change of direction! Let's hope that this one gets further than the last dozen or so tank builds...they usually don't get finished and get abandoned to the parts bin or the dustbin!