This week has been quite productive with lots going on so I won't waste any time and I'll get on with it.

After just over a year in our house, the windows and doors are being replaced. They were the bane of my life over the winter and I will be glad to see the back of the howling gales and damp that was a result of our terribly fitted windows and doors. This week, the fitters have been in and everything has been replaced apart from the back door and side panel (which will be getting done on Monday). The difference is amazing.

It's funny how a house full of tradesmen inspires a bit of work... as a result, I have been sculpting commissions and other bits and bobs... but sadly, not too much that I can show off yet. I do have this though: 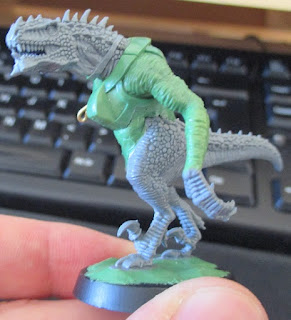 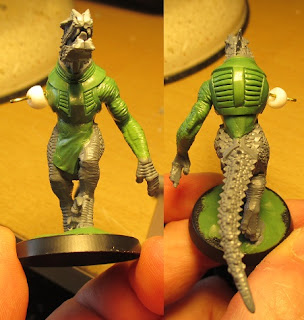 It isn't too far along but it is a converted GW Cold One who will eventually become a sci-fi Lizard-man with heavy weapon. There are three more that will also get the sci-fi treatment but that will be in-between other sculpting work.

In other hobby news, I have been sent a couple of casts of my Berserker and last night, I decided to paint one: 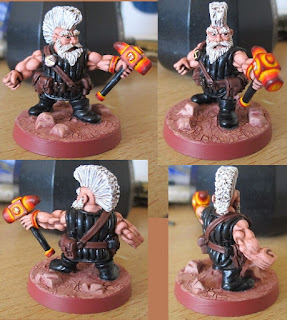 His name is Steppen Odinson... and here is his story (you will need to open in a new tab/window to read it):

Right click and open in new tab to read!

While I was painting the Berserker, I used one of GW's painting handles and I am really chuffed at how easy it was to use. I would recommend getting one and I think at £5.00, it is a bargain... well worth the money.

So... what's on the table at the moment? Well...
What is my focus on? At the moment, in this order:
I would prefer all the commissions to be at the top but my mojo is just starting to reappear at the moment so I expect to be able to improve my commission rate very soon. That is just the way the cookie crumbles.

So... Monday will see the end of the window/door fitting and I can get a few things sorted out... which probably means 'house jobs' so my hobby time will reduce... but I guess we'll just have to wait and see.

See you through clear windows!
Posted by Inso at 11:41 4 comments:

A week of Dread!

This week has been pretty sleepless... apart from one tablet night... so I have been restricted in what I could get on with. That said... I have been pottering on with things... but first...

The Halfling snipers are available to buy, in metal from here:

I have also sold my competition sculpt and it has been cast up in metal and may become available at some point. Here's the Original miniature and the metal version (photo is from the purchaser): 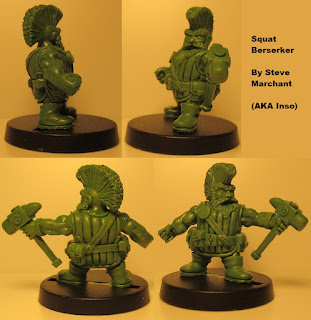 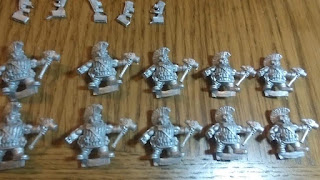 What I have been doing is putting the proceeds of the various miniature sales to good use, donating to various charities. One such charity is Cancer Research and I have helped my wife's work-place to enter a team of runners into the Race for Life, through the sale of my Squat Exo-Armour legs and the Competition Sculpt. If you wish to help further, here is a link to the donation page:

I guess it's time to start talking about hobby progress. This week, as I have mentioned, wasn't the best for maintaining hobby focus so I have kept away from commissions because, quite frankly, I don't want to ruin what I have already got so far with. When I work on my own stuff, I only have myself to worry about so that is what I have been doing this week. I have been slowly pottering along with my Dreadnoughts and have finished them. Here's what I ended up with:

... and when there was a break in the weather, I managed to get a coat of primer on them both: 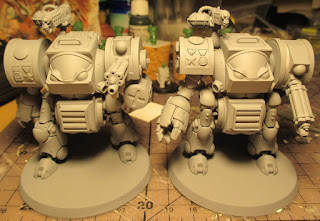 With those two as finished as they can be at the moment (I don't have the paint I need to start painting them with), I tried a bit of sculpting but failed miserably... so I decided to brave the attic and see what I could find. As it happened, I found some T'au Fire Warriors and Stealth Suits, some Dark Elf lizard riders and some Mantic Orks that I started converting into Bullgryn a while ago. Recently, I was looking on EBay and I found a lot that contained a host of Bullgryn/Ogryn weapons so I bought it. Knowing that I had these weapons on hand, I quickly got to work on the only converted Ork and added some of the weapons, ending up with this: 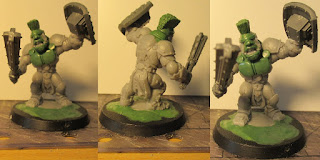 At the moment, he is not finished; he still needs a bit of filling and a few details to be added. In the meantime, I have started on the second one but he is at a very early stage so I don't have any pics. The sad thing is that I have three identical miniatures and they are made of Restic (which is a bugger to work with) so I will need to put a lot of work/thought in to making them suitably different to one another. One thing I am thinking of doing, is making a couple of female Bullgryn... that will certainly make them different. In the end, I should have a functional squad of five Bullgryn to add to my Squat army.

So... T'au and big lizards... You wouldn't think they would be compatible at all, would you? Well, I have recently become interested in Pinterest and during my travels, I came across this little beauty: 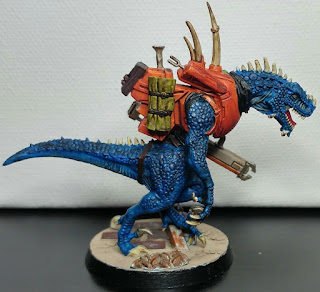 I think it is an excellent idea and although I would do things a little differently, it is something that I am keen to have a go at.

I think that is about everything.

See you from the spawning ground!

This week, has been one of sleepless nights, low motivation and pottering along.

It was great to see my son, who came down for most of the week to visit us. It was the first time in ages he visited alone so we were able to chat about a lot of things without the need for socialising with everybody. That was something that really needed to happen because we hadn't really spoken much about my dad, his grand dad, passing away and the emotional complications the loss of a loved one causes. We were able to share all the questions and try to find answers and I think that we were both the wiser for it.

We had a nice little family get together on Tuesday. We were treated to a meal by our children and had a lovely time at a local restaurant. It was a Mother's Day gift from them, while my son was visiting.

A few other family things happened... some good and some not so good... but it was quite an eventful week.

A lack of sleep has meant that I haven't really managed to get very much hobby work done this week... especially commissions (I really don't want to mess up the good progress I have made on them). All I have done is tinker with the two dreadnoughts and this is where I am at, as of yesterday: 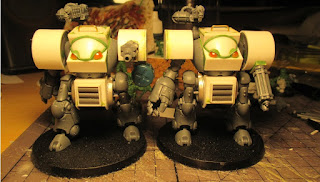 What about the rugby? There's not a lot to say about it really. England have discovered that they need to work together, better... I very much doubt if they have another win in their pocket for next week and I think that Eddy Jones has his work cut out. That aside... after a Friday night in the pub and a 'to hell with it' day in the pub watching the rugby yesterday, today is all about food shopping and a Sunday roast and little else.

See you from the spire!
Posted by Inso at 11:13 No comments:

What can I say about this week? Well, for starters, this happened:

Yes, we had snow in Cornwall and ended up getting a good few inches of it so there has been a lot of disruption. My wife ended up having a couple of days off work and we pretty much hunkered down and only popped out once or twice for a few items of shopping. Luckily, all the snow has gone now so everything should get back to normal for the coming week.

Most of this week has been about commissions. All of my hobby time from Monday to Thursday, was spent sculpting stuff for other people. Here's where I am at (goblin at the top, Squat below and 5 Squat bodies below that):

Friday, I woke up very tired so I decided not to sculpt and instead, began the process of converting the Kastelan robots into Squat dreadnoughts. After a couple of days, I have got the basic shape sorted out and now need to start adding the details:

In other news, the Exo Armour legs that I sculpted have now been sold and are on their way to America. That means that both of my casting experiments have now moved on to other owners.

I think that's about it for now.