This week has been very quiet on the hobby front but lots has been going on with the whole 'move' thing.

This is all I've managed on the Hobby front; I cast a copy of the first leg sculpt and put a Hearthguard together so that he can join Telion:

Nothing spectacular... just a standard trooper with one of the extra breastplates that are slightly different to the standard ones (just to make him look slightly different). Once I have sculpted the next set of legs, I'll get on with this squad again.

SO... the move... I have packed all of my hobby stuff up and here is around half of it: 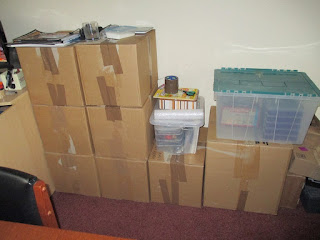 This sort of highlights why there will be a lack of hobby for a few weeks. We move house a week Monday and then I will be flitting between Oxfordshire and Cornwall for a short time while I sort things out. When in Oxfordshire, I will have no internet and when I'm in Cornwall I will be busy... so basically, I am signing off from Inso's World for a few weeks until things are sorted out. HOPEFULLY, things will start getting back to normal by the end of November... but the hobby side of things will be taking a back seat until I am happy that the new house is watertight, safe and clean.

In the meantime, here's a video of Fred (AKA the Bear) snoring:

See you from the other side (in a few weeks)!

Good morning and welcome to a lovely sunny day in Inso's World.

This week my wife and I have been travelling. We went to Cornwall on Monday and had a few bits and bobs to sort out on Tuesday before picking up the keys to our new house. It had been a bit of a pain getting to that point (bloody solicitors) but we finally had the keys so we emptied out what rubbish was in the place, put up new curtains and light shades and changed the locks so that we were the only ones with keys.

Here is the view from our 'soon to be' bedroom: 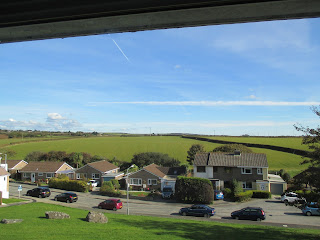 Then, I think everything hit us and we didn't really know what to do!

... but we were in Cornwall so we enjoyed the beach and nightlife while we thought about the enormity of everything and put a few ideas down on paper.

We travelled back on Friday after a whirlwind of a week and then it seemed like we weren't home... because we had left our home locked up and empty in Cornwall.

So... big times ahead and that means that this little blog may have to take a short break in order for me to get on with all of the moving preparations. We are aiming to move in a couple of weeks so I have a lot to get done in a short time...

... but in the meantime, I haven't forgotten my hobby and have managed to get a small character finished: 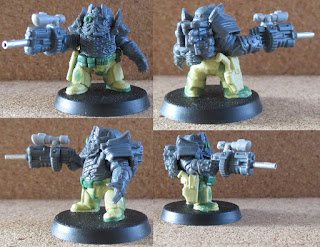 He is (effectively) the leader of all the Hearthguard (space marine scout) units in the army and will count as Sgt Telion. He still needs a camo cloak but I am tempted to give him 'optical camouflage' rather than an actual cloak... so it may just be a fully camouflaged paint scheme... I haven't decided yet.

So to recap, I have sculpted two pairs of legs for the Mantic torsos. I have now cast six of the second pair; five are standard troops and one is Sgt Telion. I have also cast five of the first pair of legs and now have the sixth pair being cast as we speak and that will make the second member of Telion's squad. Once that is done, I need to finish sculpting a further three pairs of legs and make six casts from each so that five of each will make a unit and the sixth will become part of Telion's squad. Simple.

The times, they are a changin' . 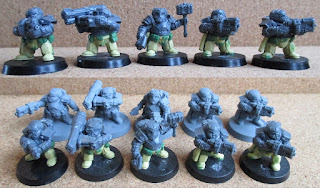 See you from behind the lens!
Posted by Inso at 09:33 No comments:

Time is drawing on...

This week has been a no hobby week.

It has consisted of work and insomnia fuelled zombification.

Yesterday, I put away my female veterans (who had sat there doing nothing for a week) and decided to start sculpting a second pair of legs for my Mantic Forge Father Steel Warriors (AKA my Squat scouts)... this prompted me to order another squad of them from Mantic (this also helps me to feel obligated to finish the next legs so they can be press-moulded for another five scouts).

The end plan is to have 6 squads of 5 Squat scouts (which I will have when my latest miniatures arrive). Each of the squads will have 5 different pairs of legs (so I have 4 more to sculpt... including the one that is WIP at the moment) so each pair I make, needs to be press-moulded 6 times.

Here's a reminder of the first legs and the five casts that I made:

Now, the observant amongst you will realise that I should have made six leg-casts instead of just five and also that this isn't a squad but is one member from each of five squads. HOWEVER, if I put together little groups like this then I will have complete units even while I work towards the end goal (splitting them all up and having different 5 different style legs in each squad).

While I am sculpting, I am also press moulding more holstered pistols for the units so it is a proper production line (or will be when the next legs are ready for moulding).

In other news, I was priviledged to receive my kitten's very first present today. Yes, he isn't even six moths old and he brought me a bird. This would have been great if he hadn't brought it into the house and let it go so that it flew under the sofa. I managed to get the bird outside and it flew off... but not long after, it was dead on the paitio with a rather thrilled Sam throwing it around. We have a little hunter alright!

I am currently in the process of a bit of decorating and I am putting up some wall paper. I have discovered that this is a horrible job and once it is done, I will plan never to do it again.

See you from the bottom of the paste bucket!
Posted by Inso at 13:05 1 comment:

The road goes ever onwards.

Hello again and welcome to Inso's World on this wonderfully sunny Sunday afternoon.

This week has been one of time off work to aid moving preparateions, including a bit of decorating and lots of paperwork. It also saw the arrival of the contract for our new home so it has been a week of many things... not to mention, it was the 28th anniversary of me signing on the dotted line for Queen and Country.

Add to that, the de-testiculation of my little kitty Sam and you would be right in thinking that not a lot of hobby stuff got done. Speaking of Sam:


This little video is Sam having just returned from the vets. As you can see, he has certainly got bigger since his arrival. He didn't seem too bothered about his little operation but he has been a bit dopey today so I think it is all catching up with him a bit.

In other news, I have been packing a lot of stuff away and have decided that the only stuff I am going to leave out for now, is my sculpting stuff and Squat army (so that I have something to tinker with). That means I have now packed up all of my armies, my paints and am in the process of packing up all of my other hobby stuff. Fortunately, I am packing things where they fit rather than in an organised fashion so when it all gets to the other end, I will have to sort everything out... which will force me to thin down again, I reckon.

So... what have I done (hobbywise) this week? Apart from packing, I have been sculpting the final details on my five remaining Tyranid Hunter Squats. I have finished two, have nearly finished a third and only have the faces to go on the last two. Unfortunately, I don't have any pictures to show off so here are the five that have already been finished to remiind you of what the unit looks like:

The five that I am working on are just the basic riflemen so when they are done, I'll show the unit off as a whole.

Other things that have occupied my mind are Genestealer Cults. The stuff that GW is puttying out for the cults is really cool... especially the Goliath trucks. Well worth a look.

I have also been thinking about Transport options for my Squats and that just means that all of the plans I have for transport are up in the air because I am really not sure what to do... however, I have been looking at tank hulls and I reckon that either the German Panther hull or the M18 Hellcat hull would make rather nice starting points for an armoured personnel carrier. I have also been thinking about land trains, super heavy transports like the Stormlord and what the Squats might use as heavy support.

Grymn aircraft have also been on my mind and I hope that, one day, I can finally come up with something that I am happy with. I really would like to have a Grymn fighter wing and in order to do that, I need to have aircraft.

So there we have it. Lots about nothing!