It's been a slow couple of weeks and it seems that most of the stuff I will be talking about, has been somewhat put on hold.

I've had the last week off as holiday but I am still staying at home and not going far. That said, last weekend marked my 28th wedding anniversary so we did have an evening away at a local, exclusive hotel and really enjoyed the peace, different environment and food/drink that we found there. The next day, we found out that one of our friends had died... and spent the rest of the day with other friends, sharing both a sense of shock and sadness...

This week has been spent drinking.

Helston had its Christmas light 'switch on' which was great, as was the burger and chips from one of the many vendors there. Helston always has a good show of lights and if you are in need of cheering up, during the festive season, the lights and the wonderful people of our town will certainly do their best to help.

On the switch on evening, I also learned of the sad passing of one of our care home's residents... toasts were drunk.

One day last week, it actually stopped raining for long enough to go out on my bike so I popped over to Coverack for a coffee and a look at the sea. 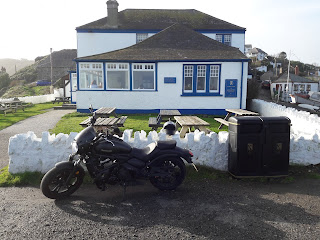 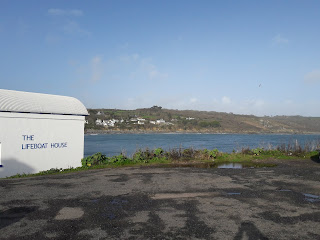 I also turned the VFR round in the garage and fired her up to make sure she still ticked over. Now I'll be able to see what the radiator damage is like and get around to getting some stripping down sorted.

In hobby news, the Leviathan has stopped, the Tauroxes have stopped, my army build has stopped and the only thing that has happened is that I bought a model kit and have been commission sculpting... so nothing to show off. On the plus side, the commissions are all Squat related so things should start making an appearance out there fairly soon, I reckon... watch this space for an announcement.

That's about it for now. Hopefully, this coming week should be a bit more positive because I have another week off and have a few plans on the social calendar. We live in hope, eh?

See you from the edge!