Can the Sharclon save the day?

It is Sunday and the sun is shining brightly. The sound of a lawn-mower fills the air; as do the squeaks of children playing.

It is a beautiful day and I am sat inside typing... maybe I should go outside and enjoy the sun...

So, this week has been another dry week for my hobby. I have not picked up a brush or any sculpting tools. I seem to have lost my mojo. What usually happens during these times is that I take stock and also spend a lot of time on-line so that is what I have found myself doing.

On my travels, I have checked the various forums and where I can help with what is required, I have been reducing my miniature/component stash and sending it out (sometimes for money, other times just because I can). I have managed to build up a small amount of funds in my Pay-pal account so I will be able to put that towards stuff I want rather than having a load of stuff cluttering up my valuable hobby space.

I have also been bidding on E-bay again and have managed to get hold of another 1/60 scale Scopedog, Red-Shoulder Custom so I am quite pleased with that. I also received my order from Heresy that I should have collected at Salute but it got forgotten about so Andy sent it over at the speed of light once I told him I'd forgotten it... so I have some Sharclon on the table and, as a result of the only hobby stuff I have done this week, they are cleaned and assembled ready for the gaps to be filled and the bases to be green-stuffed.

Kick Starters have been on my mind this week and I have pledged for two and was very tempted by a third.

The one I didn't pledge on was the Macross board-game. I really wanted to but the entry level to get any miniatures was $80.00 and I would have wanted to add more to get the extra add-on miniatures... and I just couldn't afford to do it.

The two I did pledge on are the latest Crossover superhero one and the latest Mantic Kick starter, Deadzone. There will be more news on those later.

On a completely different subject, Charmmy has been to the vets and is now fitted with a micro-chip. She was spayed while she was there so we have the prospect of the 10 days being filled with the fun of a cat who wants to go out but can't. Hmmm...

See you from the road less travelled.
Posted by Inso at 11:16 No comments:

I am writing this post after watching the news and finding out that a serving soldier was murdered, in broad daylight, by two people who claimed to be Islamic. They ran him down with a car and attacked him with knives and a meat cleaver; murdering him in the street, in front of horrified onlookers who were rightly terrified.

This is not religion.

I am utterly horrified, stunned and disgusted that this could happen to a fellow serviceman at home.

My heart-felt and sincere condolences go out to his family and friends who must be distraught and horrified at what has happened.

I suppose I should start this post with an apology. I have managed to achieve nothing this week. Absolutely nothing. I suppose that having everything piling up and trying to spread out further and further has just led to me not doing anything.

So... what have I actually been doing? Too much internet, too much drinking and too much dealing with life's little tantrums, that's what.

I have tried to work on my tank, my Sharclon APC, paint some miniatures (namely a couple of random Dwarfs that don't have a crap-load of mates to paint along with them) and do some sculpting but all I have managed is a very rough base-coat on a dwarf and a pair of sculpted feet on Thor.

Yesterday, I went into town and bought a small storage chest... hoping that the drawers were big enough for two layers of paint-pots... but they were short by 5mm so my hope of saving space failed... but now I have a nice place for just my paints to live rather than paint and all the other stuff.

I could moan about so much...

On the bright side, my Warzone Kickstarter pledge has now been finalised so I should be receiving three of the new Vulkan Battlesuits with additional close combat arms when they start sending things out. As I won't be gaming with them, I have decided that they will make a nice addition to the Dream Forge Storm-Troopers that I already have.

In other news, Charmmy has decided that she will sit on me every evening and go to sleep. She is now getting quite a grown up little catten but I doubt that she will ever be a big... or even medium sized cat. She is quite the murderer at the moment. Everything that moves in the garden is killed and eaten. Bees, wasps, flies, leaves... I am surprised that she hasn't been stung and needed veterinary treatment by now but she just keeps on killing. You wouldn't think it from such a lovely looking catten: 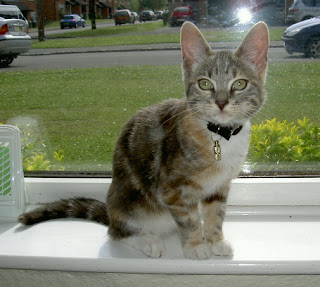 That's it for today. Hopefully, I'll find some life this week and get back to some hobby stuff again.

See you from a place of indecision!

During a rather spontaneous bout of tidying, I found this: 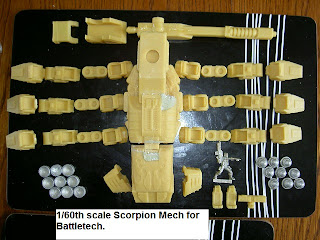 It is a Scorpion mech from Reaper's CAV universe. It is 1/60 scale and was sold in 2003 by Hellion Productions. It is NOT Battletech. It is made from resin with some white metal joints. The miniature in the picture is for scale. Since the picture has been taken, I have removed the remainder of the Milliput from the body and have prised the roof off the cockpit causing a small amount of damage. There are a few little miscast areas but the kit is complete and a relatively skilled modeller will easily be able to sort it out. I want to sell it for around £40-00 plus postage so if you are interested, let me know in a message and we'll work things out (Pay Pal only). It is now all sealed up in a box ready to be posted.

See you from the Mech Hangar!

And it was all going so well...

Every once in a while, everything catches up with me and I just can't get motivated to do anything hobby related. This week has been one of those times where my sleep deprivation has destroyed my will to paint, sculpt or anything else really.

That said, at the beginning of the week, I did manage to finish Stunner: 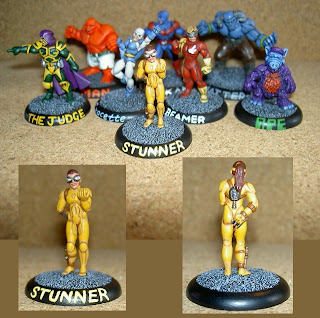 ... and start off Steel Spartan... but that was as far as it got until yesterday, when I decided to get the plasticard out and make some shapes. I haven't achieved much worth showing off but I have assembled the main hull of a Sharclon grav APC and in the process managed to work out how to make domes using a set of measuring spoons, some olive oil and some green stuff.  Once I get a little bit further along, I'll post some pix.

Yesterday I decided to buy one of my favourite tank kits; a Tamiya 1/35th scale M41 Walker Bulldog with the soul purpose being to convert it. Well, I assembled the basic tank but without all the little details and have been converting bits. It has a bigger gun and some extra armour so far but will get much more work... when I have some motivation. It is starting to look good... so I hope it works out OK in the long run.

In other news, my son has just had an appointment sent through for his aptitude tests for the RAF and that means the process has started proper. I am so happy about it right now and hope that he manages to get through the process as easily as I know he is able to do. It will be a proud day for me when I watch him leave for his basic training.

Hopefully, I will manage to shake off the sleepless nights soon because I am really getting fed up with being exhausted... then maybe I'll catch up with some of the sculpting backlog that I have built up.

See you through half closed eyes!
Posted by Inso at 15:02 No comments:

It is a bank holiday weekend and that means I have three days to play, rather than just two. On this particular occasion it has been quite handy because I have had one night where I got very little sleep (rendering the following day's plans useless) and one night where I slept pretty well so I got to catch up and still have a day off.

What have I been up to this week? Well, the main drive of this week's hobby time has been superheroes and what better way to introduce a couple of new characters than with some pix? First up, we have Exocette: 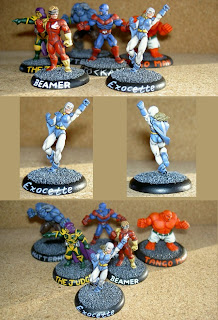 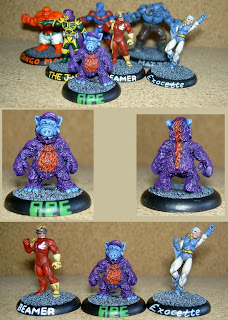 I have another two on the go at the moment; Stunner and Steel Spartan but they are still very WIP at the moment so there are no pix yet.

In other news, I have been sculpting today and have managed to get quite a bit done... hopefully the muse will stay with me for long enough to finish some commissions. Only time can tell.

Due to the fact that I hope to be attending a summer ball, yesterday's shopping trip was spent choosing a dress for my wife so no hobby shopping got done... but I did get a 'grow your own crystals' set for a bit of a fun distraction so hopefully it will work.

That is about it for today.

See you from the summer lawns!
Posted by Inso at 19:48 No comments: