The Dwarfs are on their way!

This week has been a bit up and down so it's going to be a fairly brief update today.

This week, I have met up with the local arm of the Marie Curie Committee and also the county's charity coordinator as well. I have officially claimed my place as the local treasurer and am now getting my teeth into what my duties are. I also got a T-shirt so that's cool. This coming Monday, I have an official 'photo-call' with a local shop who have donated a large sum to the charity so I will be pictured with a giant cheque, the shop owner and a few other local committee members for a newsletter... so I may get another 15 minutes of fame! The good thing is that now I am not in the military, it won't cost me beer if I get spotted by my colleagues!

In hobby news, I have been painting a bit this week and have managed to finish The Halfling Sniper unit: 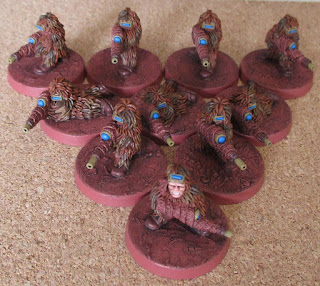 This is the sniper squad for the first platoon so I thought that, seeing as I had started on the platoon, I may as well continue with it so I also painted the Primaris Psyker: 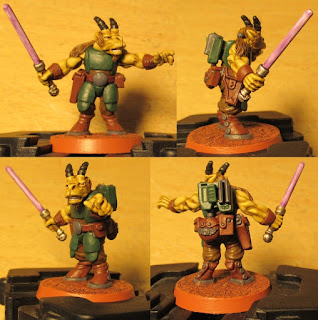 He is a Beastman Shaman but I will be using these as my Primaris Psykers because my Squats have left their psykers back on their doomed home-world so don't have any of their own anymore. Since the Primaris Psyker was now finished, I decided to give some Squat troops a go so I have opted to paint the Platoon Commander and his Command Squad. I haven't finished it yet but I have nearly finished getting it ready for the wash stage (I only have the weapons and beards to tidy up now). Here is a WIP pic of the troops:

The colours are down... I just need to continue with them and they will soon be finished. The plan is to paint the whole of the first platoon and then move on. The platoon consists of the following:
I have a way to go but it isn't too much to start with. The only stopper may be the Chimeras but I have the kits and if I don't convert them now, I can do it later but continue painting other things while I wait.

This coming week, I have company because my wife has some time off work so we will be pottering about and doing things. That means that I won't necessarily have time for much hobby activity but I guess I'll just have to wait and see.