The day of the Badger.

Hello and welcome to Inso's World on another dreary Sunday.

Life has been and gone this week (biking, shopping, chores, paperwork...) ... so I'll get straight on with some hobby stuff.

To kick things off, one of my orders have arrived from the Warlord sale (12 Ghar Battle-Suit Sprues) and the other order (Concorde Sprues) was marked as dispatched yesterday so it should be here over the next few days (allowing for the bank holiday on Monday). I am looking forward to seeing what the Concorde troops look like and will most probably be distracted if they are of a suitable size for conversion... but I guess that we will have to wait and see there. I can safely say that the drones will be spot on because quite frankly, I won't be buying any others so they will HAVE to be. Here are some links to the sprues I have ordered (each sprue was £1.00 during the sale):

In other hobby news, I found myself distracted by talk of Rough Rider conversions and for no reason whatsoever, ended up digging out my only Squat cavalry model, adding a spear-tip to it and giving it some painting time. As a result, Chuck Norrison has now been finished. Here's a before and after glimpse: 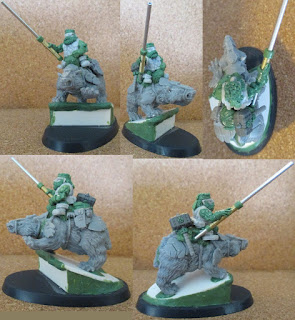 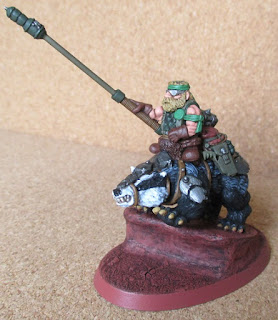 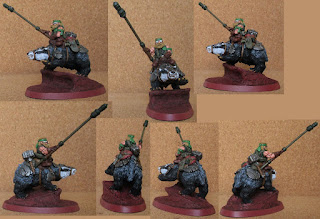 I was originally, going to put together a squad of ten of these but Rough Rider cavalry was removed from the Codex so there is no way of keeping them, while keeping to the limitations of the Codex (they are in the index but that isn't part of the Codex). As a result, Chuck will be on his own (for now) and will not be joining the Squat army unless there is a change of Codex or I can work out how to include him as some sort of a special character (a bit like Sly Marbo).

The painting may have been interrupted slightly but it didn't stall and I managed to finish the first infantry squad for the first platoon: 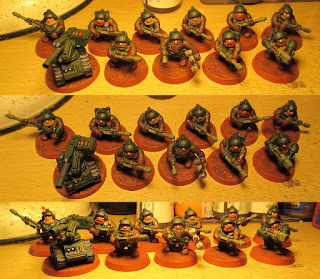 This is a bit of a milestone for me because it is my first basic unit of Squats. Luckily, I was very close to finishing them yesterday when I noticed how rubbish the weather was going to be today... so I prepped and primed the second squad, while I had some sunshine:

I am hoping to get some decent painting time in, this week so hope to have these finished in a week or so... maybe not for next Sunday but fairly close to it.

Thinking about the army, I have a number of branches that aren't getting much 'solution' time. What I mean is that there are bits that need to be made, that don't have a solid idea of what they should look like. My main focus for a long time, has been the Astra Millitarum side of the army but there are two other sides; Adeptus Astartes and Adeptus Mechanicus. The Mechanicus part is very up in the air at the moment but I have already put together quite a lot of the Astartes part. That said, there are still holes. At the moment, I am thinking about Scout transport; namely the Landspeeder Storm.

The Space Marine Scouts in my army will proxy as Squat Hearth Guard and I don't really see them as scouts... more as 'up-rated' troops so I want to give them some transport. I have checked the Codex and I like the idea of Landspeeder Storms but don't like the models so I will be finding alternatives. What I am look for is a bit like a Mule from Serenity but with a forward cargo platform, ramp and weapon station. It is probably something that I will end up trying to scratch-build... but I need six so it may be a challenge...

Anyway, that's it for this week.

See you from the front line!

That painted up Rough Rider is really cool, and the work on his explosive lance is pretty neat too.

Isn't the brewery down your way too ?

I know a good designer who could work with you and design your landspeeder replacement - then he could 3D print you 6 of them no problem.

The badger squat is the coolest thing I've seen in a while. Your squats are so much better than mine.

Sad about the codex, just give the other 9 multilasers and call them sentinels.

Death Corps riders of Krieg or whatever they are, are still legal, you can call them that if you buy the super expensive Forgeworld book.

@ Bruce - I 'd rather use existing kit or scratch-build because I don't tend to draw my ideas and I need to fettle. That would be awkward when working with a 3d designer.

@ Baconfat - I know there are ways around the rough-rider issue but as far as I am concerned, I want to keep to the Codex. It also means I am not taking up valuable hobby time creating something that may end up cut from the game, when I could be working on stuff that is in the Codex.