It's all getting there.

It is HOT! Damned hot! So hot, I have to keep wiping my hands while I sculpt to prevent the sweat on my hands making the putty too slippery to work with. It is absolutely wonderful having such glorious weather though... Cornwall is a magnificently beautiful place; when the sun shines.

So... sculpting. This week, I have finished the fifth Halfling sniper: 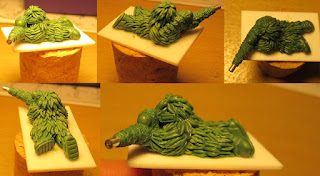 That means that I now have five finished and am in the process of deciding whether to get the first five cast up or waiting for the next five to be finished, before I get all ten cast up... Decisions, decisions...

... in the meantime, I have started on the next 'Halfling' sniper... but he seems to have been hitting the growth hormones a bit: 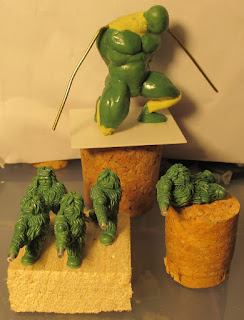 It's all very well having a band of snipers but when the enemy turns up with a Dreadnought, it's difficult to take it down so there is a need for an anti-material weapon... step forward an Ogryn with a lascannon! As you can see, it is early days yet but the pictured dolly will be getting a lengthened lascannon with all the top-spec targeting equipment and a hat. Let's face it... you can't get ahead without a hat.

The dolly started out as some 1mm brass wire, twisted together to form the frame, then a coat of Milliput was added (it is cheaper and more solid than Green Stuff) to bulk it up. Finally, Green Stuff is being used to complete the sculpt (with a few bits of rod). I haven't decided how camouflaged he is going to be but he won't be getting a full Gillie suit... and the leaves will be more 'tree like' than 'plant like'... Maybe I'll camouflage his head and torso in leaves and give him thick banded corduroy trousers to wear so he can be painted to resemble a tree! Who knows?

In other news, the spare room is nearly kitted out. The furniture arrived on Friday so it currently looks like this: 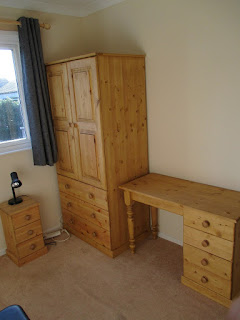 Only the bed to go (to be delivered on Tuesday) and we will be ready for guests. That said, we will be having one guest for a few months because my daughter is relocating to Cornwall and will be shacking up with us for a short while until she is able to make other arrangements.

Turning my gaze elsewhere, I have been working on another little project... Operation Cat Hotel!

Since we moved here, we have noticed a compost bin at the bottom of the garden: 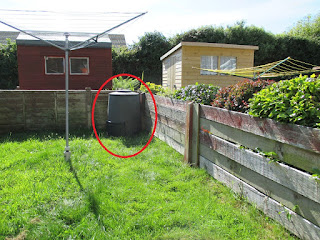 It was filled with un-composted material so I decided to empty it and put it to good use. After a quick brush-up, I drilled a few holes and threaded some rope across: 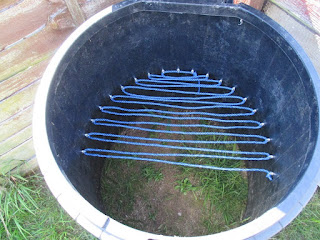 I then added some leatherette fabric to act as a hammock: 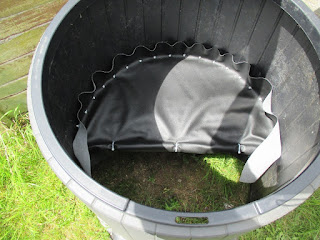 I also put a reinforcing wooden batten across the front (which you can't see) so that the rope wouldn't droop at the front. I still have a lot to do (tidy the fabric up, possibly put some windows in and paint the outside) but it already acts as a shelter for the cats when it rains and they have been into the hotel for shade (although I haven't seen them use the hammock yet).

Well... that's about it for now. This coming week will be about a new bed, liaising with a friend of mine about getting the bathroom renovations started and sculpting an Ogryn with a lascannon... not to mention, the imminent arrival of some Primaris Space Marines.

It should be an interesting week.

I'm imagining the RSPCA raiding you following reports that you're composting cats....

And yes, the heat is awful here. Some of my glue has burst it's tube. Not a euphemism.

Hahaha... there will be no composting of my little kitties!

Once the outside has been suitably decorated, there will be a queue of cats a mile long, waiting to get in there. I am thinking about how I could use DVD/CD discs for roof tiles :D!

The weather is so gorgeous to look at but the heat is a bit much... being a ginger, doesn't help.

The 5 ratlings look great, I especially like prone one. Love the ghillie suits on them.

I quite enjoyed sculpting them and I am glad they turned out OK.

I'm imagining the RSPCA raiding you following reports that you're composting cats....

This made me realize a lot about it. And if anyone still does not know this, hurry to read this web page at all.