This week has been another busy one around the house and on the hobby front.

To start with, we now have a fully functioning guest room with all the furniture and a bed in there. All that is needed is a bit of linen and someone to arrive.

I managed to get a day where I could be outside and not melt so I took the opportunity to clear out the shed, replace all the shelving and give it a good old clean before putting most of the stuff back into it. There is actually floor space in there now... which is great.

On the hobby front, I have been busy sculpting and have continued with the ogre sniper (no pics) but also managed to finish all the Halfling Snipers so that they could be sent off for casting: 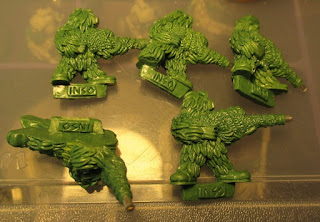 As you can see, they all have nice little basing tabs so I know they are mine. They were sent off on Saturday and the casts should be arriving by early August so there will be an opportunity for other people to get hold of some, fairly soon. This will be the first time that I have had my own miniatures cast up for myself so it is a bit of a departure from the norm. It will be interesting to see how they are received.

As well as sculpting, I have been receiving hobby stuff through the post. First, a small batch of Primaris Space Marines arrived from EBay. There has been a bit of a faff because they weren't the ones I ordered but we have reached an agreement and things should be sorted soon. In the meantime, I decided to start work on the lieutenant model... so I replaced his head, moved his helmet to his belt and added a 'bulge' on his helmet so that his bionic eye would be able to fit: 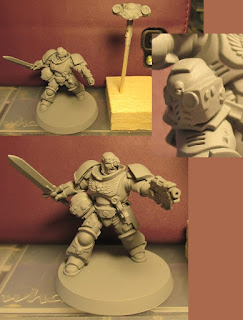 In the above pic, you can see the converted helmet and also see that he has been primed, ready for paint. I plan to paint these all in camouflage and have started to lay down colours to see what they look like. I just have some small black flecks to add... but this is going to be the pattern I will be using (with little black flecks added next): 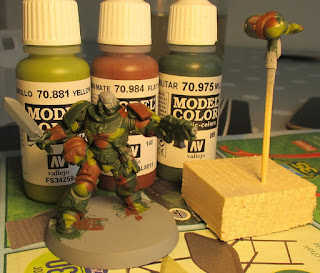 It will end up as a stylised version of British DPM. I have put the paints I have used, in the background so that I know which ones they are for later use (I have a lot of greens and browns). This miniature isn't one I ordered so I am happy to use it as a test model to see how things go. Obviously, I have a long way to go yet but every journey starts with the first step.

In other news, I stumbled upon an opportunity that I couldn't resist... cheap Megaro Zamac kits. On this ocasion, Run Valam: 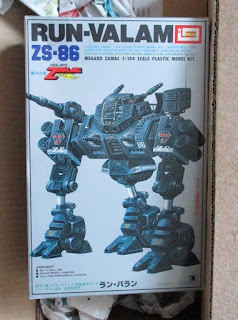 This particular kit is one that regularly turns up on EBay for £30+ but I got this one for £5.49. It was advertised as 'bits only' but later, the seller posted that all the pieces seemed to be there so I took a punt... and they were. Bargain. Now I just need to decide whether to add it to the rest of my 'retirement' Megaro Zamac kits or convert/build it up as a single. I am sure I will make my mind up soon... these are the retirement kits: 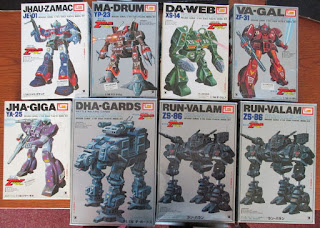 That is it for this week.

Lovin' the camo muhreen. As it is, those colours look a good basis for an ambush pattern (late war hertzer type thing); but I can see where you're going with the DPM.

And those grey imports look good too...

The grey Imports are a thing from my childhood. I always wanted the set but couldn't afford/find them all. I have one more to go for the full set... a Harrier or Phantom Gerwalk kit (I can't remember which one). It's one of a couple of projects for my official retirement :)