The wind has changed direction.

This week has been fairly interesting so I'll get straight to it...

My wife braved the shave... (the week before last... but I failed to mention it in my last blog post) and has so far raised nearly £400 for MacMillan Cancer Support, which is very cool. Her charity page is still up and now shows a 'before and after' so pop along and please donate if you can:

On the job front, I have now passed all the checks and should be starting work this coming week. I will be shadowing a Health Care Assistant for the week before going for my induction training the following week so things are really getting interesting now. I know that the first few months will be tough because it's all new to me, it's a particularly demanding job and I have been away from a job for nearly two years. I have a feeling that Inso is going to be a very tired chap! I am really looking forward to it and can't wait to get started.

I have finally got my medals sorted out. I sent them off this week to get them cleaned, have the clasp fitted and get them court mounted and treated with stay-bright. They are due to return to me on Monday and I am looking forward to seeing what they look like. I plan to attend the remembrance festival again this year so I want them to look as good as they possibly can. Hopefully, I'll be able to show them off next week.

On the hobby front, a fair bit has happened...

First, I got a refund from EBay for a parcel that wasn't sent... so I used the refund to buy the same thing from a more reliable seller and as a result, I have a new box of Kharadron Arkanauts to convert. I plan on using four for Demiurg and the rest will become the start of a kill team.

Next, I finished the Drone Controller for my Demiurg Air Guild so I now have two complete command units for that guild: 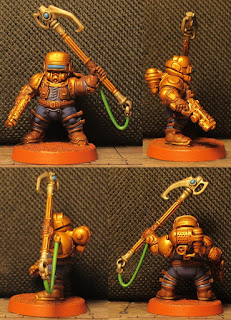 With that finished I sat and stared at the Air Guild Drones and thought... "nah!" so I decided it was time to sort out the big dilemma... "how exactly, did I paint my Earth Guild Drones?"... well... that was the plan but I failed because of the effect that shades and under-coats have on colours so I decided to bite the bullet and just pick new colours, that looked similar and start from scratch. Luckily, I only have three painted Earth Guild Demiurg and three of their drones so I can ignore the colour differences for now and if it bothers me too much in the future, I can either repaint them or replace them. Now that I have made the paint-scheme decision, I have noted the colours on my army list so I won't forget them and have begun the task of putting together the first full unit of Earth Guild Drones... and here is where it's at: 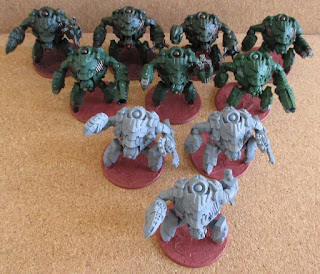 Looking at the image (left to right), top left  are the three finished Drones (assault). The last one on the back row and the next two on the row in front are re-coloured, incorrectly base-coated drones (I had already base-coated them but the colour wasn't right and I didn't know what colour it was so I took the decision to re-coat them with a green that I knew the identity of)... they are a bomber and two gun drones. Next is a 'first coat of green' bomber, then the two in the next row are shield drones and finally, the one at the front is the last assault drone. Since the picture was taken, the grey ones have received their first coat of green.

From that little ramble, the unit will consist of:

Luckily, the Demiurg Command Staff are painted differently and I can estimate the colours better so when it comes to painting the next Earth Guilders, I shouldn't have the same colour problems.

Speaking of colour problems... I don't have very much of the green paint I have chosen (Coat d'Arms - 111 Dark Elf Green) so I have put in an order to Hasslefree Miniatures to get another couple of pots. Obviously, I couldn't just order two pots of paint so I have ordered a STEVE and a SCULPTING DOLLY to make a decent little order. I have no fixed plans for them as yet (apart from the dolly becoming a superhero of some sort)... but I never sit still for long.

Finally, I have so far painted three Primaris Space Marines and have a fourth on the handle... so that little project is ticking along nicely as well.

That's it for this week.

See you from the new age!