This week has been a bit of a "hurry up and wait" week. I have been fidgety because I am waiting for my job application to run its course and I haven't really heard much; apart from a couple of my references getting in touch to say that they had been contacted... so things are progressing but at their own pace.

I have pottered around a lot this week but haven't really achieved very much. Yes, I have done my chores and got what needed to be done, done... but really, I have felt a bit in limbo. It has been a bit of a "coulda, woulda, shoulda" week.

Hobby wise, I haven't really got much done either. I bought another couple of Warhammer Conquest (issue 1) copies because they were on 'last day of sale' and have been chopping one one of the Primaris Marines up, to see if I can turn it into a Demiurg Subterranean Guilder... but haven't got very far. I have even started assembling a  couple and painting them as they are... which hasn't got very far either. In fact... the only things I have managed to complete this week are a Demiurg Air Guild Leader: 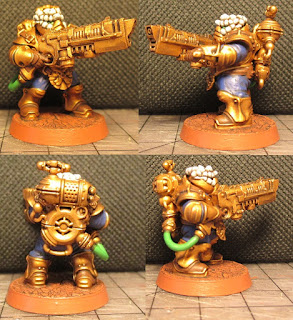 ... and an Air Guild Mechanic: 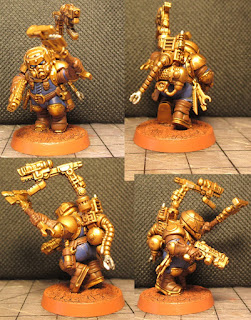 I have started to convert the Drone Controller but have got as far as a bump-guard on top of his helmet... so his mask still needs a lot of work.

As you can see, it has been a pretty unproductive week.

In other news, tomorrow will be the first anniversary of my Dad's death so the next post may have something about that... I will most certainly have a small toast to him tomorrow.

I'm expecting an offer letter for new job (I've had a phone call telling me to expect it). And the whole thing as just brought back to the surface all of the reasons why I should leave my current job - sleepless nights an' all.

So I hope they hurry up and get your job sorted soon - there's nothing quite so bad as the wait. I think it's worse at 50 than it was at 21.

I hope your letter turns up soon :)

I am lucky though... I have already got the job but they are going through references now... my DBS checks are good to go... it's just waiting on the call to start now... and yes... the waiting is a real killer.

I find it disheartening that your 'unproductive' weeks equal if not exceed my 'productive' ones...