Hello again and welcome to Inso's World on a lovely sunny, if rather blustery, day.

This week has been... interesting.

I'll start off with hobby stuff... and this week has been solely geared towards my Demiurg project. As is usually the case, a chance happening has distracted me away from my Squat project and my attention has been fully turned towards Demiurg... on this occasion it was a mix of insanely cheap miniatures and the new Warhammer, part-work, magazine. With that aside... I have fully painted three Air Guilders for my Demiurg project: 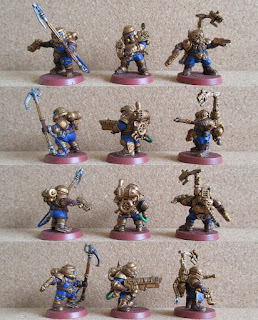 As with the Earth Guilders, there is a Controller, Leader and Mechanic (from left to right) but they are a different colour to mark them as a separate guild. To go with these Demiurg, I have been assembling and painting some drones that I got from the Warlord Summer Sale (which I have mentioned over the last couple of weeks). These aren't finished but are most certainly getting there: 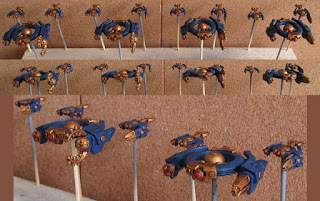 In the picture there are four large drones and eight smaller ones. There is a mix of large gun drone, small gun drone, small targeter drone and large shield drone. Most of the drones are as they came in the box but the small gun drones were converted by snipping off one of the targeter lenses and adding a spare weapon from the Concord troops on their sprue. Any spare weapon/shield pods from the large drones are being saved to use elsewhere... especially the shield pods because I plan to convert some Earth Guild walker drones to have those on so that they can protect their Demiurg associates.

In addition to the above work on the Demiurg project, I have also ordered some more Kharadron troops to join them. These should arrive sometime this week (although it's EBay and the seller is not being very helpful... so that may change). I have also been thinking about transport and how I will go about creating an Air Guild transport ship... but enough of that for now... let's talk about a little bit of real life...

At the beginning of the week, I was pottering about as usual, doing my chores, a bit of hobby stuff and this and that... on Wednesday, me and my missus had a big chat about life, the universe and everything as well as going out for a coffee and posting a parcel... on Thursday, I was looking at a website and found myself on the job application page... it wasn't a big form... just the real basics... so I filled it in and clicked send.

Then I pottered around... did some chores... a bit of hobby stuff and thought "I'd better sort a CV out". Luckily, I already had a CV written but it needed lots of changes so I started to work on it... then the phone rang... "are you available for an interview, tomorrow at lunch time?". "Yes... thank you."

So... to cut a long story short... I didn't plan on going for a job but I put in an application, got an interview the next day, had to throw together a CV and find my suit (which was too big for me due to my weight loss - THANK YOU strong belt!), attended the interview... and was offered the job. All in the space of a day!

Now that the dust has settled, I need to fill in a full application form (which I am doing today), put together some details (for a security and DBS check) and drop them off tomorrow.

The big thing is that I am not going to be an Aircraft Technician. I am going to be a Health Care Assistant, at a local care home that specialises in dementia care. The home is run by a not for profit, charity organisation and that fits in nicely with one of the reasons I moved away from the RAF. It will be a complete departure from what I am used to but I think that once I get my head around everything, it'll suit me well and hopefully be the start of a long and extremely rewarding career in the care sector.

I have some induction courses to go on but will be able to shadow staff in the meantime so that I can get a feel for what goes on in the home...

I must admit to being a little bit stunned by the immediacy of it all... and how rapidly everything happened but I guess, that's the way the cookie crumbles.

Obviously, I have a lot to take in and deal with, over the coming weeks and months, and a massive learning curve because I have no experience in the role but I am up for the challenge... I am certainly under no misconception about the emotional roller-coaster I am jumping on to.

The times are very much a changin'.

Wow! That's a big change in your life. I wish you all the best with it.

Congratulations on getting the job you didn't expect! As always your demiurg and squats continue to inspire me

Wow. Good Luck with that !

Hey that's awesome news ! Wish you all the best !

And that your Kharadrons arrive shortly ! :)

Congratulations! I did dementia and Alzheimer's care for a couple of years. It can be hard work, but very rewarding. Best of luck!

Thank you for all your best wishes :)

I hope that I am up to the task because the role has the potential to be something that I will find very rewarding and hopefully will take me all the way to my proper retirement.

I have a lot to learn but the staff are lovely and I am keen to learn... I am also well aware of the challenges that await me.

I am rather excited, yet apprehensive about the months ahead... It's been a long time since I have done anything but engineering.

I’d need to check with you here. Which is not something I often do! I take pleasure in studying a post that may make folks think. Additionally, thanks for allowing me to remark! slots for real money