It's just a case of getting there...

It hasn't been a bad week and things have been ticking along OK. Little and often has been the main idea about hobby time this week and it has started to pay off a little.

I have one priority at the moment and that is to finish the command squad for my Squat army. Anything else is secondary. With that said, I have managed to get a bit further than the very WIP picture I last showed and have at least given them all their beards, equipment and weapons:

So, from left to right, we have:
Obviously, they have a long way to go but it is progress. The commander will have a bionic eye and I am still working out how to blend the power fist into the shoulder. The standard will count as the close combat weapon for the veteran carrying it because I am going to give it a spear head. I am hopeful that my sleep patterns will allow me the dexterity to get more work done on these during the week but I guess that is just something to wait and see about.

While I have been working on this squad, I have also been ticking along very slowly with the second primaris beastman. He is starting to get a face that looks presentable but I am not going to show him off just yet bacause I'd like him to be a bit more finished.

In other news, I needed to order some more green stuff so I bought some from Heresy Miniatures. While I was at it, I couldn't help myself and bought a few more Sharclon to go with my collection. When my sculpting mojo has died, I will be painting Squats and the Sharclon will make an excellent change of pace during the process. My last ones had a simple paint scheme and I will be continuing that with the rest of them. Here is what I have already painted:

I need to swap things around a bit (I have plans for some heavy weapon conversions) but the paint scheme will stay the same apart from squad identifiers... I'm thinking some sort of symbol on the red part of the shoulders. I really love these little miniatures and it shows because these are the only miniatures (apart from those involved with my Squat army or VOTOMs) that I have purchased in a long while.

Turning my gaze towards 'life' now and my dad's condition has improved greatly so there is likely to be a shorter stay in hospital than expected... that said, I thought I'd share this image of him so that you can understand why my mind hasn't been as focused on things as would normally be expected: 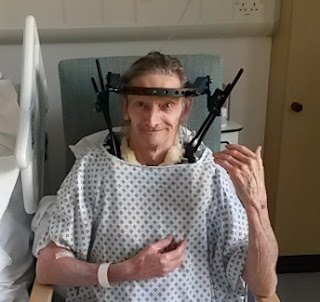 The short version is that he fell and broke his neck and it has now been bolted together; hence the head-gear. He has made huge progress over the last four weeks and his rehabilitation is going well.

Aside from dad, my son has been getting on with his basic training well and it was ironic this week that I was getting gas-mask training for the last time, when he was getting it for the first time! I am sure that he probably enjoyed the process just as little as I did.

That's it for another week.

See you from the bus stop!

All the best to your dad for a speedy recovery

Hope your dad has a speedy recovery!!