The experience of glorious failures.

This post is to show everyone that, in order to get further with anything, you have to fail... sometimes, a lot. With this in mind, I thought that I would dig out a couple of my "unfinished work" boxes. These are but two of a number of other boxes of unfinished sculpts, that were close to hand and didn't involve me rooting through the loft.

So without further ado, lets have a wee look, shall we?

I'll start small... and by that, I mean my only foray into the dark realm of 15mm sculpting. Me, being me, decided that I'd go for broke and attempt some space Dwarfs: 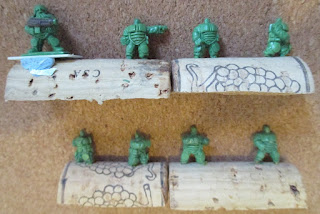 Click the Pic!
These are on standard wine corks and each of them measure about 11mm to the top of the head. The one at top left, is the only one I finished but I struggled with casting weapons so they died a death. I think that I did OK with them... for a first attempt. I have not been back to 15mm sculpting since.
Staying on a theme, these next ones were destined to be a range of body-armoured space Dwarfs. I finished a male and female body blank and started another couple but didn't get any further:

Click the Pic!
I was happy with the detail but I think I got side-tracked by another project.
The next photo is one of a range of sculpts: 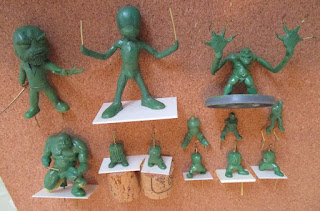 Click the Pic!
From top left is a Ninja caricature (still WIP but sidelined), a caricature for a friend, and a fantasy character called a "grinning Groper"... on the lower row, from the left, we have an Ogryn sniper and a host of unfinished space Dwarfs.
This next photo is of various creatures: 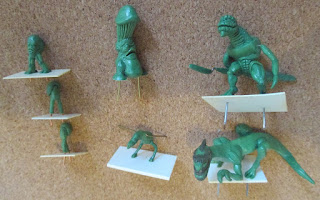 Click the Pic!
The three in a line, on the left are Mushroom men "bombers". Top middle is a "Knob-headed Shambler" (for a competition that got cancelled) and top right, is a space Lizard. Below is a tentacle creature and a Dragon mount. A bit of a strange collection of sculpts but if I sculpted the same thing all the time, it would get very boring!
Next we have some failed commissions. I really tried to finish these but my heart wasn't in it and it caused me to go off sculpting for the best part of six months. I was open about the troubles I had and no money changed hands. That is the reason I always tell potential clients how unreliable I am and never expect money up front for any commissions:

Click the Pic!
Finally, we have a photo of a selection of sci-fi sculpts: 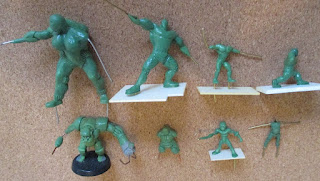 Click the Pic!
This is a mix of aliens, robots, female space Ogryn and a superhero. I reckon you should be able to work out which is which.
As I mentioned before, this is a small selection of some of my failed attempts at finishing what I started. I don't look at them as failures at all because every time you sculpt, you gain valuable experience that you can carry on through to the next sculpts. Some (most) of these will remain as they are... a reminder that I don't get it right every time... but some will be dug out and reworked in the future.
The main reason I decided to share this post is to highlight that sculpting isn't always "cut and dry" and sometimes you get to a point where you can't face sculpting at all. Sometimes, stopping what you are working on and sculpting something different, will help you "get back in the saddle" again. Other times you can't face sculpting and the things you were working on are retired to the "unfinished work" boxes... but that isn't always a bad thing. We all have to learn and we all need to makes mistakes and gain experience, in order to get to the next level.
Life is hard, sometimes... and simple things can be a big struggle. Be kind to yourself and try to view mistakes as a learning experience with an opportunity to do better, next time.
... all that said... I WON'T be posting my vehicle scratch-building failures... it would take me a week to get everything listed!
That's all for now.
See you from the road less travelled.
Posted by Inso at 10:38