Only a month until... the DoD is over

Well, it's that time of the week again and I am sitting in front of my shiny new PC typing another blog post. I have had an interesting week of leaving parties, parent's evenings and wedding anniversary meals and have managed to land this weekend.

...so what have we got this week then? Well, I waved goodbye to a bunch of work colleagues who have either left the RAF or are being posted to pastures new. The speeches were good, the drink flowed and the company was excellent.

I had to go to school for a parent's evening which consisted of a bunch of different teachers saying how they thought things were... and then telling me that everything was cool except for all of the resits that were going to be needed. My daughter is doing really well but they think she can do better so they would like her to resit certain parts of the courses she is doing. Teachers eh?

Friday was my 21st wedding anniversary. I have now been married for longer than I haven't! The amazing thing is that me and my better half are still happily in love with each other. Life is full of little miracles. Here's to the next 21 years.

In other family news... I have been hairdressing again: 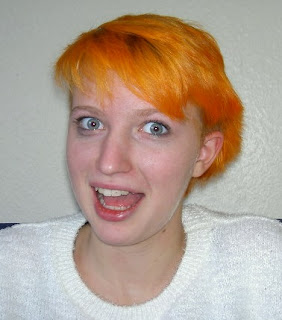 I managed to convince my daughter to try orange instead of bleached blonde... so I spent an hour getting things to the stage you can see. She was happy with it but no doubt the school won't be so chuffed... I have seen ginger hair that vivid so bring on the contender! 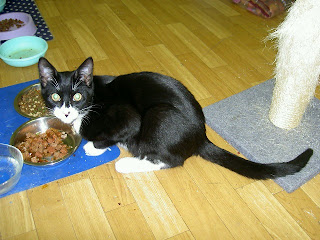 Henry isn't a Kitten any more and isn't a cat yet... he is officially a 'catten'. He is also the coolest catten around.

So... I read something and it was a question:

"Has anyone converted a Hellbrute into a Daemon Prince?"

... so I now have a Hellbrute on the way from E-Bay (I don't know why but I fancy giving the conversion a try).

Finally, I have an update in the Grymn Tunnel Fighter project; namely the specialist squad being complete: 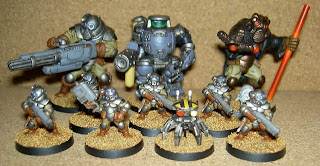 That means that I have two vehicles and three units of Clankers (30 models in all) to finish in order to complete the army. I must admit that converting and painting the Grymn was good fun... it has been a while and I have missed it.

Well, the next few weeks will be mental so I have no idea what sort of updates will be forthcoming but there will be updates of some kind.

Finally, I have to mention the 2012 Unofficial Diorama of Doom. Two months have passed and there is just a month to go. For more information, have a look here:

Have a good week, watch out for the flooding, stay safe and I will see you next week.

See you from the runaway train!

Cool looking specialist. Love the fact you dye your daughters hair I get collared for painting all the girls fingers and toes in our house!

Funny enough...I have had that same idea. Converting a hellbrute into a daemon prince.

Could be done pretty easy.

Congrats on the anniversary mate!!!!
Really warms a heart to hear love still is there.