Of Grymn and other things...

Before I start, I'd like to welcome a new visitor to Inso's World, P... B... A... (I can't work out how to type the Russian script). Welcome aboard and I hope you enjoy your stay here.

Last week was very busy for me, both at work (overtime) and at home so I don't have many pix for you today... but thanks to some luck on E-Bay, I have managed to get hold of the last Vulkans for a Tunnel Fighter Clanker unit. Here is the last squad in kit form: 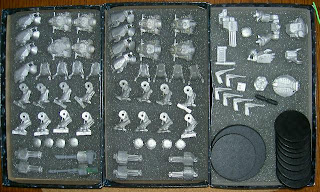 The following pic shows the two squads I have already assembled (the bottom image shows the contents of a basic squad): 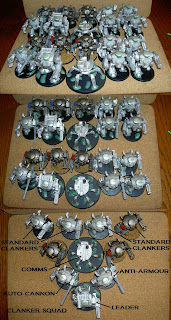 The assembly of the last unit is likely to be my Christmas project... In other Grymn Tunnel Fighter news, I have been painting the OGrymn mystic and have got as far as base-coating it... so I don't have pix. I have also been painting the Visitor bodyguards but haven't got very far there either.

In different news, I have finished sculpting the Space Cowboy and have it all packed up and ready to go on its journey to the Netherlands. Once I have been given the go ahead, I will show off some pix but until then... I'm not allowed. The good news is that I don't have any commission obligations now... so I can relax.

Yesterday I started trimming large cardboard sheets and have begun to paint the Pantomime back-boards. I had no idea that cutting cardboard would take so long... then the paint wouldn't cover very well... but a start is a start.

I hate Peugeot cars. We have one and it is dreadful. The key fob perished so I got a replacement fob. I swapped everything over and the car wouldn't start because it went into Eco Mode. So I charged the battery and still the thing wouldn't start. The RAC were called and he quickly pointed out that there was a chip missing from the key. After a root through the bin and a bit of tinkering, the said chip was installed in the new fob and the car started. The chip was in addition to the circuit board and nib of the key, was exactly the same colour as the fob and was cunningly hidden in plain sight. I hate Peugeot cars.

Well... it has happened... I have two published poems! Here is a LINK to the page but you will need to register to read it (I think that is only due to some adult content). My poems are on pages 41 and 42... I am happy.

Hopefully, I'll get as much done as I did last week and instead of it being mostly work, I hope this week will be mostly hobby. I guess we'll just have to see!

See you from the wings!

Unpaid of course... you know the drill ;)

Of course but it's nice to stay regular though ;)