It is remembrance Sunday so as usual, I joined my family at the local town for the service. It was a cold day with bright sunshine and the RAF marched past and stood in lines. The other paraders (including veterans, Scouts, cadets, Brownies and all manner of others) joined them in reverent silence and as a community we remembered the fallen. There was a low flypast by a Merlin and Puma.

This week has been pretty disjointed. I have had a trip away, a head cold, various distractions and have also managed a small amount of hobby time... but it has been erratic to say the least.

I have also been painting Pantomime scenery... so that will be taking up a lot of my time because I need to get it sorted before the show.

Back on to the proper stuff and I have ordered more Visitors and in the parcel I received there was an extra surprise... which I will share at a later date. What that means is that I now have all of the components to put together the second wave of the Visitor force.

Actual hobby time has steered me towards the final squad of my Tunnel Fighter army and I have been putting together the elements for what promises to be an interesting unit. It will contain:
I have converted the heavy walker and here is a pic: 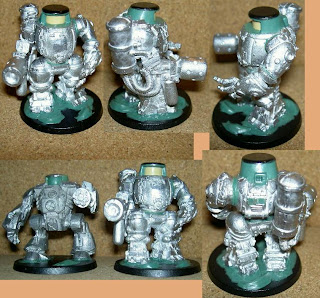 He is armed with a big flame-thrower and a weird claw... and looks a good fit with the Clankers so he's in the special unit. I got him from a mate (Gi6ers from the FoD) and wasn't sure what I was going to do with him... so he was perfect for my little unit of misfits.

Well... that is about it for today.

See you from the cardboard box I am hiding in!
Posted by Inso at 18:12

I am more and more interested in the Gryms (and I blame you!)

What rules you planned to use them with, if any?

I don't game at all so I don't have a ruleset in mind for my Grymn. However, I do have a Grymn army that is tied into the GW 40K Imperial Guard codex so that would work :)