Hello again and welcome to Inso's World on a chilly but bright Sunday Morning.

This week has been one of... not very much, really. I have done the usual chores and have pottered around a bit but I haven't embroiled myself in any shelf building or renovation work so I have had lots of time to focus on getting some hobby stuff done.

Obviously, I have been able to visit the beach... this was Praa Sands yesterday: 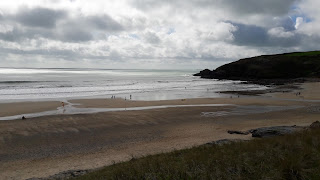 It was a cool, slightly overcast day but the waves were just right for the many surfers who were there. To make the trip perfect, I started the visit with a coffee and a Cornish pasty at the cafe there. What better way to start the day?

So what hobby have I been getting up to? Well, to start, I have finished off my Maiden Guard; a female veteran Squat unit: 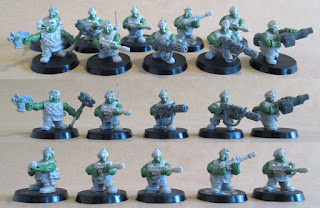 These have been languishing in a box, in an almost complete state, for ages but the bit that needed finishing was the arms... so that is what I did. A couple of days of on-off sculpting and they were finished. Just for information, the grenade launcher is from the Cadian plastic sprue, the meltas are from the Space Marine Centurian kit (they are shorter weapons than standard ones), the comms pack is from Mad Robot Miniatures, the hammer is from a Mantic Forge Father - Forge Guard model, the bolt pistol is a Space Marine one and the heads are all from Statuesque Miniatures. These are counts-as Veterans with no additional specialisation.

With the Maiden Guard finished, I could have got on with my Exos or one of my other, already started, units but I decided to start a standard infantry squad that will be part of the third infantry platoon. That meant starting from scratch and this photo shows the process and where I have got to so far:

Looking at the numbers, it has gone like this:
As you can see, I don't skimp on the assembly of these troops and, in the long run, it makes them very sturdy. Once I have bent the wire into shape and shortened it as required, the sculpting will commence in earnest... but I'll put together another picture for that, as I go.

And there you have it. I've managed to get anothe unit done, start the next platoon and still have time to go and feed the ducks!

Over the next month I will be going through the job hunting process so things will slow down a little but I think I will manage to keep ticking along with things.

Well that's about it for this week.

See you from the queue!