I wasn't going to post today...I was going to save it for the weekend but then I thought..."hang on...I have another follower!" So I couldn't really NOT post, could I?

Welcome to Spartan117! I hope you have fun on your travels through Inso's World...a world where you can never tell what will be around the next corner!

So...what was it that I found? Well, a couple of years ago, I went to Salute and bought a whole bunch of stuff. I have slowly been working my way through my stash and I recently came across this: 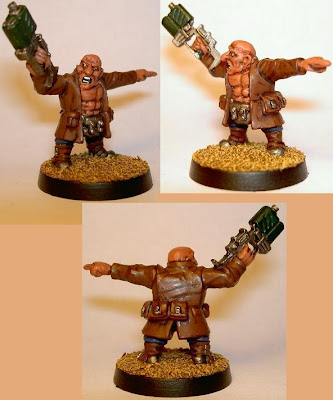 
It is a Dvarg from Black Hat games. Now at first glance, he looks like a bit of an odd sculpt but he grows on you. He's a Space Dwarf and he is just one of a set of eight.

I bought a set of eight. They were all bagged up behind the counter and I put them in my convention carrier bag with the rest of my swag and took them home. I didn't think anything more about them until I unpacked them and found that three of the Dvarg I had bought were so poorly cast that I couldn't recover them. They suffered from a massive case of mould slip...and so they had to be retired to the bin :(.

I still have five of them...just enough for a small squad...so watch this space for a few more!

I quite like them but have had to work far too hard on them with regard to sorting them out ready for paint...but I guess they are worth the effort.

See you across the mist covered loch!
Posted by Inso at 20:33