Water? From the sky?

It would appear that the weather has turned from glorious sunshine to wonderful storms and heavy rain. The only downside is that it means priming is off the table so I will only be able to progress any projects up to the priming point.

Yesterday we popped over to Porthleven for lunch and we spent a while watching the sea crash against the shore in the blustery weather. That's the wonderful thing about living in Cornwall. You get to see every aspect of the county in all weathers.

I have had uncle duties to attend to this week and have been busy helping to get things sorted with cars. It has made a nice change and has meant doing a few things that I haven't had to do for a while... like getting a mechanic to fix a car without ripping anyone off... so that was fun.

Friday evening was spent in The Rodney Inn, listening to a decent local band while socialising with friends and it was handy that I am teetotal because it meant we could avoid the rain by me driving to the pub.

So... what about hobby stuff? Well, to start with, work on the last of the tanks for the tank company has stalled completely. I am completely unable to sculpt at the moment. I have tried but I have a bad case of the yips and even after mixing putty, I cannot sculpt anything and end up wasting the putty. That said, I am able to fill gaps and do simple stuff but I just can't seem to face anything more artistic. I am hoping it will change soon.

That's what I haven't been able to achieve. However, I have been able to get some work done on the Chimera proxy and have managed to get it finished: 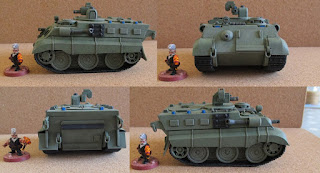 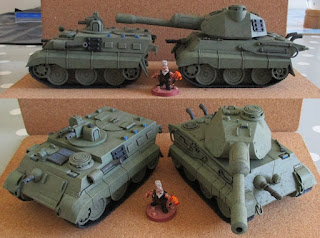 I am very happy with the results; especially because it has certain hints towards my favourite AFV, the FV432. I also think that the process is simple enough to repeat in a fairly straightforward manner so producing more 'identical' vehicles shouldn't be a problem.

With the Chimera finished and the last tank stalled, I had reached the end of what I could be getting on with so I needed to have a think. First, I ordered some more tanks... but in the meantime it meant having a look at the army list and seeing what I could work on. Then I had an epiphany. I could finish a Spearhead Detachment fairly quickly by using the armour that I have made, finishing the last tank and painting up five miniatures. here is the detachment:

Luckily, everything was already converted (apart from the Company Tank commander) and it was just a case of locating things.

On the 'to-do' list was:
With a solid plan in mind, I have located my little Engineseer team that originally looked like this:

... and have started painting them. They now look like this:

As you can see, the Engineseer is more or less finished and I have started to work on the two basic servitors. I haven't started on the heavy servitors yet because I need to sort out basing them but also being able to paint them off the base (so I can paint the bases without being hampered by the tracked chassis of the two servitors).... so I will be putting my thinking cap on for that.

Overall, I think that having a goal for everything that I am currently working on, that is all tied together so cleanly, will help me to finish sculpting the tank commander... hopefully!

See you from the shopping cart!
Posted by Inso at 10:53

Yes we have had rain today.
And it has been GLORIOUS!
In my little part of the world we really did need it!

Priming can wait a day or two... it has been too blistering hot for too long so just enjoy the rain!