Hello and welcome to Inso's World again. A lot has been going on this week so I shall take a deep breath and plough in.

Nearly 20 years ago, my son was born. This week, he has left home and joined the Royal Air Force. Ever since he was old enough to have a mind of his own, he has wanted to join up and now he's done it. It was a bit of a wrench to say goodbye, when I dropped him off at his training unit but it was also a very proud moment for me. It takes a certain kind of person to join up and take on the responsibilities that go along with military service and to think that my son has taken the big step makes me very proud.

I wish him the best of luck in his future career and am really looking forward to going to his pass-out parade (even if it means that I have to polish and press my No 1 uniform).

As you can imagine, it has been a very strange week of trying to get my head around the situation and sort out the wake of everything left behind... but I have sort of landed and have managed a tiny amount of hobby stuff.

So... I have managed a small amount of sculpting on the command squad but nothing much to show off. The same can be said for the second Primaris psyker (Beastman Jedi)... again, not enough to show off. I have also gone and done this: 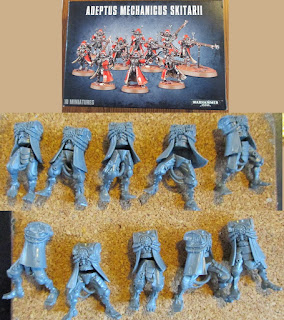 I could be cruel and say "can you guess what I'm planning" but I'm not going to...

... a while back, someone suggested that I should have some veteran Tyranid hunters in my Squat army and it has been playing on my mind ever since. First I needed to decide what I wanted to create and the first thought was this: 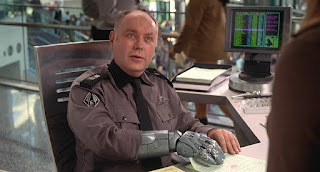 For those of you who don't recognise him, he is a recruiting sergeant in the film Starship Troopers. He is also missing his arm and both of his legs because he was in the mobile infantry; fighting the bugs. This really struck a chord with me as any survivors of a Tyranid invasion would likely be in the same boat... so, here's the back-story:

When the Tyranid invasion hit the Squat homeworlds, the war raged. Towards the end of the massacre, the Kings of the strongholds made the decision to launch escape ships with all of the wounded, some technicians, medical staff, children and women on board... as well as scientists and practical people; in order to start again elsewhere. As the ships disappeared into the vastness of space, the shockwave created by their dying world washed over them as a grim reminder of what the Tyranids had done... but they were saved and needed to get to safety.

Sadly, the huge amount of wounded quickly became a problem too great for the crew on board to deal with and they needed to urgently seek help. Many of the wounded had suffered multiple amputations and severe burns and needed urgent treatment or they would succumb to their horrendous injuries. Fortunately, the ship entered Mechanics space and was hailed by the princeps from the planet below. Quickly, the enormity of the situation was realised and bargains were struck between the Squats and the Mechanicus... engineering knowledge in exchange for the 'repair' of the injured.

When the Squat ships landed, the Mechanicus servitors swarmed aboard them, quickly removing all of the injured Squats and taking them to the infirmaries. The creators of the Skitarii were hugely involved in the repair of these Squats and without stopping removed both legs from each of them, closely followed by any injured limbs. These were replaced with mechanicus prosthetic limbs. Where burns were found, the flesh was removed and replaced with vat grown flesh. Dead eyes and ears were replaced with cybernetic implants. Struggling organs were repaired or replaced. It was only be sheer luck that one of the Squat medics saw what had happened with the leg amputations and was able to prevent the poor injured having the full Skitarii treatment (brains augmented with data-collectors, eyelids removed etc...).

When the wounded left the infirmaries, they were changed in body and spirit. Their chests were now encased in a special carapace that was linked to the power pack that enabled the various cybernetic components to operate. They all had robotic legs and some had robotic arms. Some also had robotic facial implants, eyes and ears and some were so badly disfigured that they now wore a mask of metal.

These Squats had been altered in spirit too. Who knew what suffering they had gone through during the repair process... but one thing was certain; their hatred for the Tyranid race was all consuming and they would be at the forefront of any fighting if there were Tyranids involved.

So... there you have it; Veteran Tyranid Hunters.

The only issue I have now is deciding how I am going to slot them into the army. There are four options:
To be honest, I am tempted to go for Skitarii Rangers because of the bonuses that are provided for the bionic bodies but scouts would work to explain the extra buffs due to the mechanical components. However, I am interested to hear any thoughts you people may have.

In other news, I have been lucky again and have managed to get hold of another 1/60 scale VOTOMs mech; the Snapping Turtle: 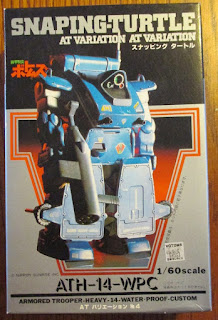 All I need now is a basic Scope Dog with parachute pack and a Diving Beetle (both in 1/60 scale) and I will be happy.

See you from beside the sign that reads 'Per Ardua Ad Astra'!
Posted by Inso at 14:27

Best of luck to your son! You should indeed be proud.

I like the idea behind your veteran bug hunters! Grim but realistic.

I love this idea of mecanics squats and hatred for Tyranids. The mecanicum is as always ambivalent and i love that too.

I have always enjoyed the way the mechanicus, with all of their religious zeal for mechanical things, were so facinated by the Squats and their 'strange' ability to build technical marvels without the need for STCs.

It just made perfect sense to me, that the Mechanicus would be the right place to get cybernetically repaired.