I was so glad that I finished my other two walkers today that I thought I'd throw a picture out there with the assembled group: 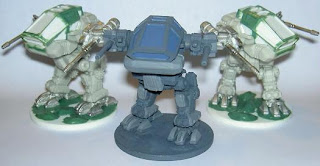 
I have to decide how I am going to paint them all at the moment but they will be urban coloured (grey) but may have some sort of camouflage and will DEFINITELY have nose-art teeth and eyes. They need that big space under the cockpit covering up.

A bit earlier, whilst travelling the web, I found this: 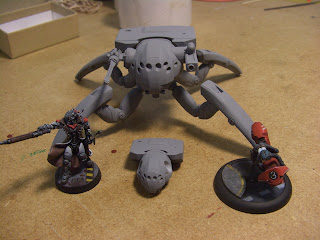 
It is a WIP Spider-Mech from Antenociti's Workshop and I can see a lot of gamers going mad for them. The smaller body at the front, is possibly aimed at the 15mm market but I can see myself going for the smaller one for my Grymn forces. With a small amount of conversion, they would make great Tachikomas from Ghost in the Shell. I reckon they will be fairly pricey, looking at them (especially the big one), but if they were used as transport for your commander/character models, you wouldn't need too many to add flavour to your forces.

See you ducking down in the gully, avoiding the snipers!
Posted by Inso at 16:39

They're still looking great, and I'm really excited for the final product. Can't wait to see what you do for mouth/eyes art.

The spider mechs look really cool. Not something I could really use at this point, but eventually, hmmmm.