I guess that , seeing as it is Sunday again, I am due to update the blog again...so I won't disappoint and I'll get straight on with it. First up, I have finished another six Tunnel Fighters: 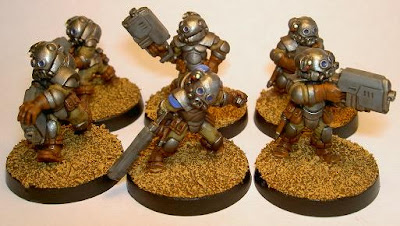 
Looking at the latest pic, you'll notice that one of them has some blue markings. That is because I have started to work out the squads and which troops will be in which squad. To start with, I have put together my shotgun troops into a single squad; supported by two flame throwers: 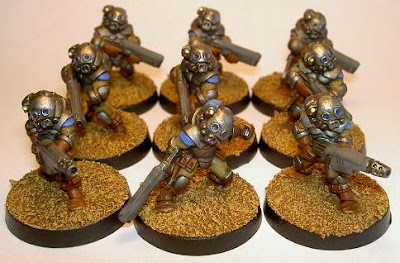 
I just chose blue...because I could! The leader has a few extra blue bits on his helmet because it is easier than Sgt stripes and means I don't have to mess about with different coloured stripes and the like. I won't be marking up any other squads until they are complete so with that in mind, I have to put together a Grymn with grenade launcher before I paint the squad markings on the next squad...it is easier to do them all together so that I get the colours the same.

On to other things and the support robot that I showed a little while ago. The idea is that these disposable robots have a fold out wall that is heavily armoured. Once the shield is deployed, the robot trundles forward with the squad of troops following behind the safety of the barrier. That way the squad benefits from extra cover without the restrictions of being mounted in an APC. Here is what I have got so far (please bear in mind that it is still very WIP at the moment): 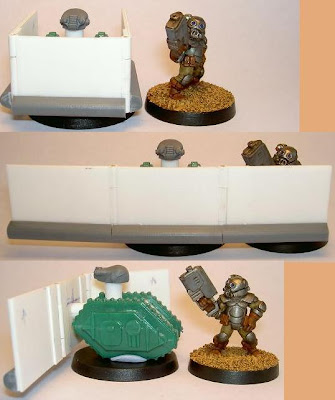 
I still have some details to add to the robot's body and some extra armour to add to the front of the armoured shield. The shield itself, is hinged and folds in and out. Just in case people are wondering, the robot's head is made from a GW Terminator head, chopped in half and turned upside-down.

The plan is to have one of these robots in every squad so I'll be building the squad APCs to a size where they can carry the troops and their support robots. I have plans for a more mobile type of robot to act as a comms officer in each squad too...but I haven't got further than that (apart from the thought of it having legs rather than tracks).

Today, while sitting in Tesco's, I started putting together an army list for the Tunnel Fighters using the Void 1.1 rules. I haven't got very far but keep an eye out because once I have got a bit further, I will be posting them on the Grymn blog.

I won't be doing very much more hobby stuff today as I have to do a spot of revision for a short course tomorrow. Yes, it is that time of year where I have to go and put my NBC knowledge to the test and go for a dose of Gas in the respirator test facility! I'm not complaining because I also get a bit of range time so I can put a few rounds down.

That is life in the military for you....mind you, yesterday when I waved off some helicopters I thought how lucky I was to be doing it...I guess sometimes it is easy for me to think that what I do is very ordinary but to most people, preparing helicopters for take off and then seeing them off for flight would appear to be quite out of the ordinary. I guess it is all 'horses for courses'.

See you through the gun-smoke!
Posted by Inso at 14:47

Heh. I like how you use your bitz. And did you get the hinge idea of Brandlin?

I have not seen these before. You have done a nice job on them.

A hinge is a hinge...I had the idea before I bought the tanks. I use copper wire for the hinge pins rather than plastic...apart from that, it is a hinge very similar to Brandlin's but it is just a hinge so didn't need to be inspired ;).

What you are doing here is wierd Inso but I likes it!

The tank thing reminds me of a crowd control vehicle way back in Judge Dredd. Basically a padded bulldozer.