This week has been one of mixed fortunes. We are getting along with life and coming to terms with the move and everything. Part of that is getting stuff done around the house so I have started building shelf units for the space under the stairs... a space that will eventually allow me to unpack some of my hobby stuff again. Well, I started chopping up wood and realised that I needed some dowelling in order to secure some of the beams so off we went to town in the car. Unfortunately we had to stop and limp home because the radiator decided to burst and spill all of the coolant all over the road. After double checking to make sure it was definitely the radiator, I ordered a new one from a UK parts supplier and it was in-stock.

Everything was going well until I got the invoice. It was in German.... and the part was in stock in Germany and won't be here until Tuesday. If I'd have known that, I would have gone to an alternative dealer and had the car fixed by now.

So... we have had a bit of a one step forward, two steps back week... but that doesn't mean it has been all stop on the hobby front. I have been ticking along with my Hanomag pattern Chimera and have got this far: 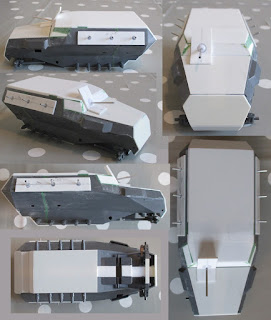 As you can see from the green line down the side and the white strip down the length of the vehicle, I have shortened the length of the vehicle (by about 2cm) and widenend it (by 1cm). It wasn't done in a particularly tidy way but I am not too concerned because this conversion is just to see how the proportions look. It will probably end up as the army commander's transport (so it can be a bit different to the stock ones that will be built in a batch a bit later on). As I am going along I am learning things about how future Hanomag Chimeras will go together so it is worth messing about with.

Just for information, the little balls for the gun positions are just acrylic beads. I still have a long way to go but it is a nice shape and I quite like the way it looks and although the conversion is quite involved, it is pretty simple and will be simplified further on future ones.

In other news... I've booked a tattoo session with my son in March. We're off to get inked together. Should be fun!

See you from the babbling brook!
Posted by Inso at 16:07

Nice work on the conversion ! I had a look at the stuff on warseer too, quite inspirational. I hope your car parts turn up soon.

The warseer conversions are awesome, aren't they? It's like he loves cutting up plastic :)

Just remember that with conversions as with houses a little paint hides a lot of sins. ��