This week has been a bit of a damp squib to be honest. I was feeling poorly for the first couple of days and with a lack of sleep added into the mix, I really didn't feel too much like doing much hobby stuff.

So... the Ghar are still where they were last Sunday... and so are the transports but with those in mind, I have separated the top 'platform' of the one I showed off with the turret because the platform was askew. Now I can fix it back in place where it should be. I also received my mini turrets from Ground Zero Games so I was able to confirm that they were perfect for the job I intended for them. I have also found some other little turrets from Old Crow that will probably be used for the heavy flamers on the front (tidying through 'stuff' does have its uses).

Speaking of tidying... I have been sorting through all of my hobby stuff recently (and it is still continuing) and having to make some difficult (but sensible) choices about what I should keep and what needs to go (either sell, give away or bin). This has had a negative affect on my mojo but has been quite cathartic as well. I still have a lot of stuff to go through but I have managed to thin down considerably without having to get rid of the stuff I really want to keep. My wife has been great because she has placed no restrictions on me... she knows that I need to free myself from the weight of everything so I am able to decide what stays or goes. I am getting to a point where the sorting is almost finished and now I will begin to focus on storage for everything. It will be good to empty some of the painted stuff that is cluttering up my cupboards into storage cases.

So... a bit of a boring week so far. However... in one of my usual changes of direction, I decided to make a female Squat in Exo Armour. She is effectively a counts-as Captain Lysander from the Space Marine Codex... here she is: 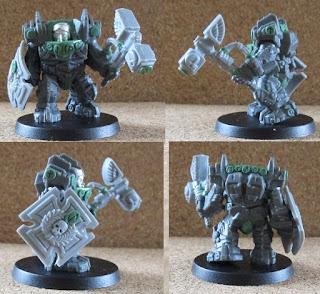 She has an Iron Halo (the big fins on her shoulder pads) and is armed with a Thunder Hammer and Lightning Shield. Here she is with her friend; another captain: 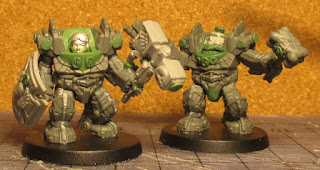 ...and here she is with all of the Exo Armour together: 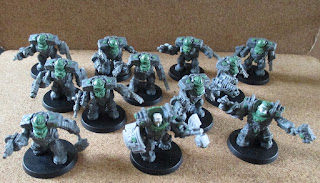 So... why did I decide to build her? Well... while sorting through things I found a spare Forgeguard body and thought "I've got those Statuesque heads that would fit nicely on that" so I converted her up. I thought that I wanted to make her a bit different so I dug out the hammer and shield and thought they would tie in nicely with the stats for Lysander so that is what happened.

Once I had finished her, I struggled to prevent myself buying a bunch more of the Mantic Forgeguard off EBay (fortunately, I succeeded in keeping my money in my pocket).

It's funny how things just decide for themselves what happens.

See you from the top of a Diplodocus!
Posted by Inso at 14:34