We have a commander.

This week has been another relatively quiet one so I have been able to get a small amount of focused hobby time in.

As I have mentioned, I need to get the Squat army command squad finished and have not been particularly motivated to do it lately so in a bid to get things moving, I have changed my tactics and have been focusing my sculpting on individual miniatures... and where better to start than on the army commander himself?: 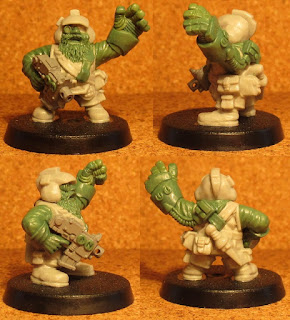 You may well notice that his power fist has grown somewhat. Well, that was as a direct response to feedback from someone on one of the forums I visit. He mentioned that it looked more like a robot hand than a power fist... and now that I have finished the commander, I am glad that I took his suggestion forward.

I have yet to decide which member of the squad will get the focus this week but in the meantime, I have been using up the left-over green stuff on the second primaris psyker/Jedi Beastman: 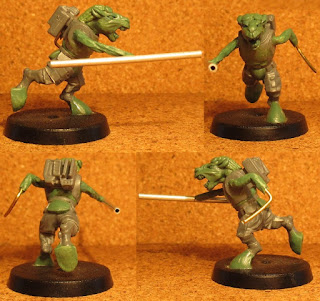 I have been concentrating on getting the face right and I am now happy that he looks suitably grumpy. I have put a base layer for his dreadlocks to be built up and I have decided that he has had his horns trimmed down (like Hellboy). He is likely to get a small goatee beard, some dreads dangling where his side-burns would be and some more 'wayward' dreads on his head (his hair looks a bit too groomed at the moment). The pole he is carrying will turn into a double light-sabre (like Darth Maul has) and his other hand will probably be a clenched fist. Obviously, I still have a long way to go... but now that I am happy with the face, the rest should be straight forward.

In other hobby news, I have bought a model kit to try and get the amphibious transport moving again. Hopefully, having the wheels from this, will stimulate some progress on the track units: 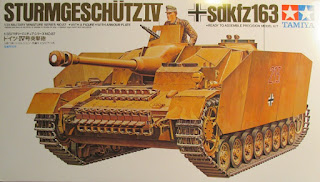 I specifically chose this kit due to the relatively small road wheels.

... and finally... there may be painting very soon:

These three Squats are ones that were spare so I glued some plastic arms on them and have undercoated them with Halfords primer; ready to be used for selecting an army colour scheme. That's where I'll leave that for now.

Well, I hope you have enjoyed today's little update.

That beast-man's head is bloody brilliant!

Great work, the captain is excellent - and looking forward to seeing what you do with the StuG.

Need To Boost Your ClickBank Traffic And Commissions?